During her vetting, she vowed to reform the department and said she was up to the task

•She said she is experienced and will provide adequate services to the people.

•Salim served as CDF treasurer in one of the constituencies and was a city board member for four years. 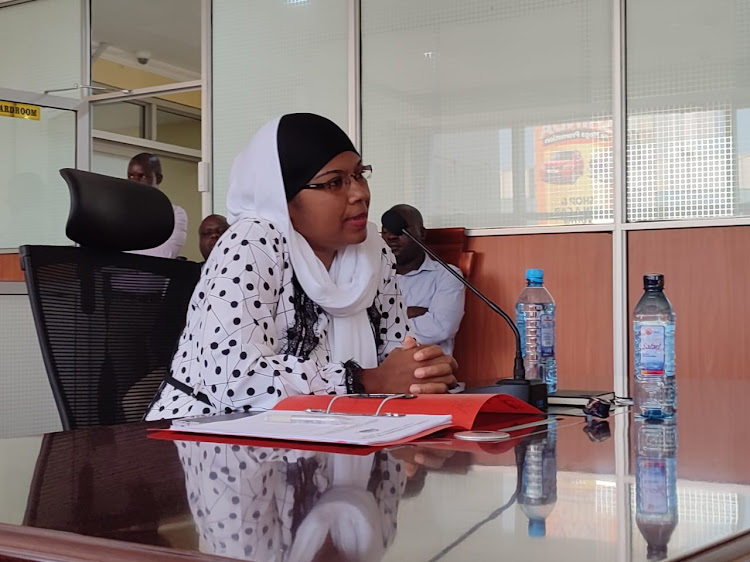 Kisumu county assembly has approved the nomination of Faridah Salim as Roads and transport executive.

The assembly approved the report by the vetting committee chaired by Speaker Elisha Oraro.

The report was tabled in the house by majority leader Kenneth Onyango.

During her vetting, she vowed to reform the department and said she was up to the task.

She said she is experienced and will provide adequate services to the people.

Salim served as CDF treasurer in one of the constituencies and was a city board member for four years.

She also served in the planning and infrastructure committee and had a four-year stint as a legislature.

When asked how she will handle the issues of pending bills in the county, Salim said she dealt with the matter during her time as an MCA.

She said together with her colleagues they pushed for detailed information on the done projects, those yet to be paid for, those paid for and any other details.

Salim said despite pushing for detailed information until when they left the assembly, they never got the details on the bills nor the funds required to clear them.

“Maybe if the second assembly received it, I look forward to getting the information because you cannot pay money for what you do not know. That is contrary to the oversight role of the county assembly,” she said.

When questioned on how she will handle the issue of public participation, Faridah said being in the managerial position she will ensure there is adequate involvement.

Nominated MCA Aslam Khan asked Salim to explain how she will tackle the road maintenance issue.

Khan said there were fears some of the roads were recycled each budget period.

Salim said the challenge of contractors' matters was troubling and the same problem featured within the city board.

She said once in office, she will speak to the contractors and hold another meeting with the roads department to highlight the challenges and how they will be addressed.

“I will set the record straight and put various policies forward. If need be I will sanction those who  don't meet the required standards,” Salim said

The position fell vacant following the exit of Joyce Osogo who is eyeing the Homa Bay woman representative seat.

In an advert in the local dailies last week, the assembly clerk said Salim will appear before the appointment committee on March 15.

The matter was tabled before the assembly on March 3.