Kisauni is considered one of the biggest ODM strongholds with 126,151 registered voters 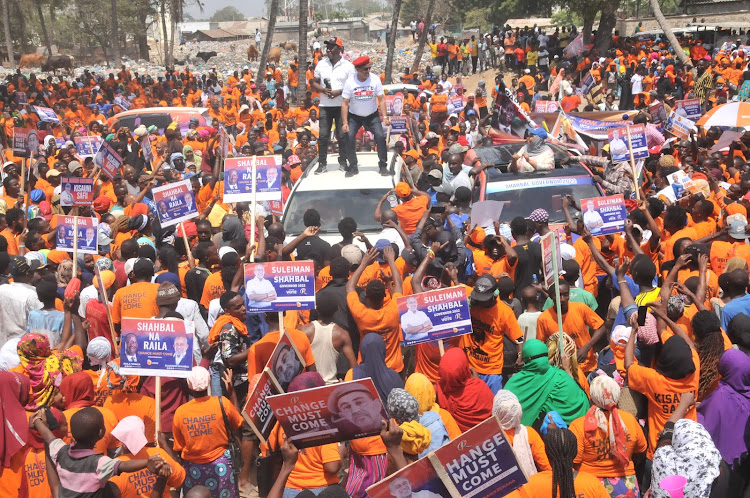 Kisauni is considered one of the biggest ODM strongholds in the county with 126,151 registered voters, according to the IEBC 2017 register.

Shahbal is seeking to capture the constituency which has been Governor Hassan Joho’s stronghold for the past 14 years.

The businessman said he will create job opportunities for the many jobless youth and women in the county.

“We are going to ensure that we create a conducive business environment to attract investors in our county,” he said.

Shahbal also said he will fast-track development from the grassroots by allocating each of the 30 wards Sh50 million Ward Development Fund.

“We are ready for the nomination. We are telling our opponents to stop crying foul and also prepare well,” he said.

The aspirant had recently expressed his reservation on the upcoming ODM party primaries.

In both contests he came in second after Joho.

Shahbal returned to ODM last year. He has however been labelled a party hopper by his rival Mvita MP Abdulswamad Nassir’s camp.

“This time we shall ensure that leaders will be elected by the wananchi and not a few individuals in the boardrooms,” he said.

The gubernatorial hopeful also took the chance to campaign for ODM leader Raila Odinga whom he said was leading the economic revolution in the country.

“My decision to run for governor is not about power, but of the belief that we can change this county. That is the same change Baba (Raila) is fighting for,” he said.

Shahbal's roadshow began at the Kadongo grounds and snaked its way to Minalove, Mlaleo and Bamburi Mwisho ending in Masjid Noor in Utange.

He was accompanied by former Kisauni MP Rashid Bedzimba, Woman Representative aspirant Amina Abdalla and a host of MCA aspirants drawn from the constituency.

Bedzimba is seeking to recapture his seat after losing it to Wiper's Ali Mbogo in the 2017 election.

He said he will uplift the lives of Kisauni people if elected to parliament again.

On her part, Abdalla said residents should turn out in large numbers to vote in both the party primaries and the general election.

“You can only elect good leaders if you turn out to vote, a vote for us is a vote for change,” she said.

Says if no interventions are made soon, the violence might spread and cause tension in the county
Counties
4 months ago