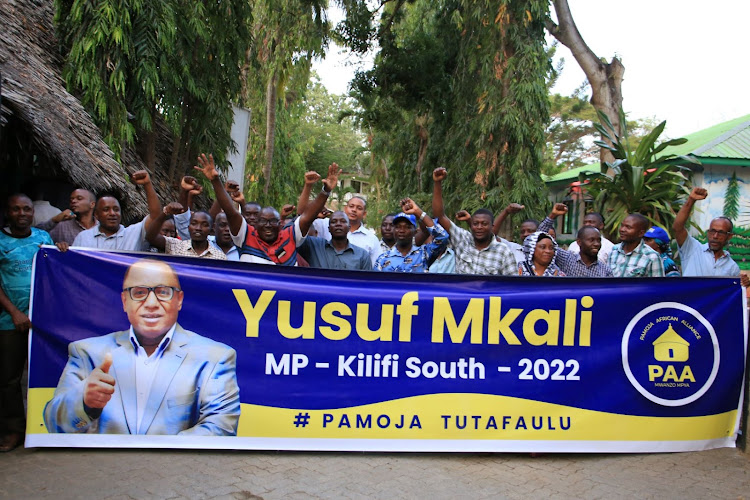 Supporters of Yusuf Mkali hold his banner at a Mtwapa hotel on Sunday
Image: JOHN CHESOLI

Another politician has ditched ODM for Coast-based Pamoja African Alliance as the direct ticket fiasco continues to wreck havoc in the Orange party.

Yusuf Mkali, who is eyeing the Kilifi South MP seat, on Sunday, said there is no democracy in ODM.

“I was in ODM but when I saw the shenanigans that were being cooked heading into the nominations I could not stay there any longer,” Mkali said.

He spoke at a hotel in Mtwapa where he met 30 MCA aspirants from all the five wards in Kilifi South constituency to iron out modalities of working together.

Mkali said he got ‘disturbing information’ that some of his opponents had made arrangements with party bigwigs to ensure a certain individual is handed the ticket.

“Some people said they have money and would let the money talk for them. I would not get justice in the party and I could not wait to be shaved," Mkali said.

PAA, whose party leader is Kilifi Governor Amason Kingi, has reaped big from ODM’s woes, netting at least 12 of the 55 MCAs in the Kilifi county assembly.

Ndago, who is also the Deputy Majority leader in the assembly, has ditched ODM for PAA.

ODM had 28 elected MCAs and 12 nominated.

On Sunday, Mkali said PAA is being run like a people-owned party where even the opinion of the grassroots people is respected.

“That is why even those who will lose in primaries will not be left behind. We have agreed we will still walk together as a united family,” Mkali said.

Last Thursday, Kaya elders summoned officials of PAA and the Ukombozi wa Majimbo coalition (Umoja Summit Party of Kenya, Kadu Asili and Shirikisho Party of Kenya), in a bid to have them work together.

PAA bolted out of the coalition talks, leaving the three parties to form the Ukombozi wa Majimbo coalition, angering the Kaya elders.

Represented by their spokesperson and former Malindi MP Lucas Maitha, PAA agreed to work together with coalition but after further talks, which are yet to take place.

“We need to work out the modalities of working together and iron out certain issues which are contentious,” USPK chairman Matano Chengo said on Sunday.

Maitha had last week announced that they had agreed to form a coalition, something that Chengo denied on Sunday.

“What we agreed is that we will work together, but after we hold further talks so we can iron out the issues that made PAA bolt out,” Chengo said.

“I used to speak vehemently about the nominations in ODM. But there was no clear direction that the party gave. Some leaders were being favoured,” Kingi said.

He said the favouritism would deny Mombasa residents the opportunity to elect the leaders they want.

“It then became difficult for me to remain there. Now I am in PAA and I will vie for the governor seat on the PAA ticket," Kingi said.

On Saturday, ODM Kilifi county chair Teddy Mwambire said the party primaries set for Tuesday and Wednesday have been postponed indefinitely to allow for consensus building.

He refuted claims that the party postponed the nominations to favour incumbents.

“Some aspirants are still discussing to see if they will reach a consensus. We decided to give them a chance and if they won't then we will have to subject them to the primaries. In Mombasa aspirants asked for fresh popularity polls which the party is currently doing,” he said.

However, businessman Suleiman Shahbal said opinion polls are doctored and that is why his opponent is afraid of nominations.

“Last month, Infotrak opinion poll showed that my opponent is at 58 per cent. If I am at 58 per cent, would I really fear going for nominations,” Shahbal said.

He said he has worked for ODM and increased its popularity in Mombasa significantly after ditching Jubilee.

“A year ago, ODM in Mombasa was at 34 per cent (popularity). Today it is more than 60 per cent. It did not happen by accident,” Shahbal said  at his campaign secretariat in Nyali on Sunday.

He said they know all the tricks used to rig nominations.

“Because they know they cannot rig through the ballot, they now want to rig through opinion polls,” he said.

However, Mvita MP Abdulswamad Nassir insisted he is still the most popular candidate in Mombasa and would easily win the gubernatorial race.

He said he is ready for another opinion poll, insisting that Shahbal camp rejected the previous two party-commissioned opinion polls and demanded another one, something Shahbal denied.

“When it comes to popularity, I don’t even know where to start. I am way above them all,” Nassir said on Saturday at his secretariat in Tudor.

Shahbal said the people will decide the leaders they want.

He warned that should ODM continue causing distress in the party, it will lose support in the Coast region.

“The information we are getting is that we have already lost Kwale. Kilifi is shaky. If they continue with these games, we will lose Kilifi and Mombasa," Shahbal said.

He said all they are asking for is free and fair nominations, as ODM leader Raila Odinga promised when he lifted Shahbal and Nassir's hands at a rally in Tononoka last month.

Mwambire, who is the Ganze MP, said some aspirants had already reached a consensus but he could not name them.

“That will be done by the National Elections Board. We have quite a number who have agreed and by next week, the NEB will make the announcement,” Mwambire said. 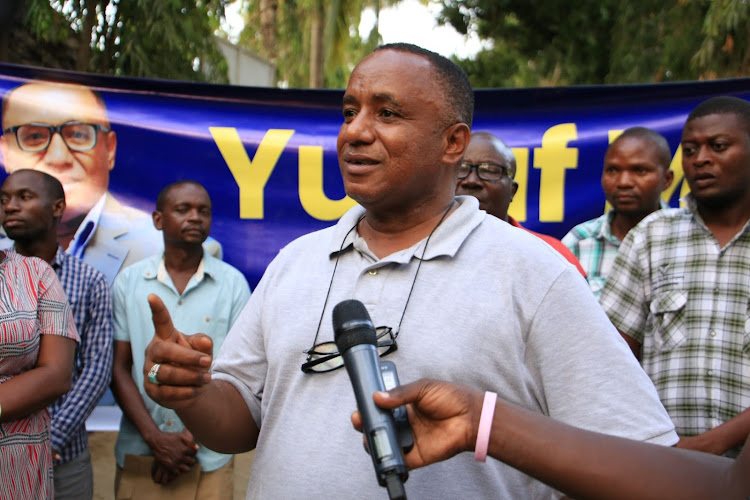 Why Raila's giant coalition is a threat to ODM party

The battle for aspirants will destroy party tyranny of numbers.
News
3 months ago

Says they support Raila as an Azimio presidential candidate, but will field their own candidates in Kilifi.
News
4 months ago
“WATCH: The latest videos from the Star”
by BRIAN OTIENO Correspondent, Coast Region
Coast - Page 25
04 April 2022 - 22:00