• In Buxton, supporters of Mombasa Woman Representative Asha Hussein said the party has got it wrong after reports emerged that it had given a direct ticket to her opponent Zam Zam Mohamed.

• In Nyali, lawyer Joshua Ndere had a hard time calming his supporters who wanted to block the busy Mombasa-Malindi highway at VOK to protest alleged issuance of a direct ticket to his opponent Said ‘Saido’ Abdallah. 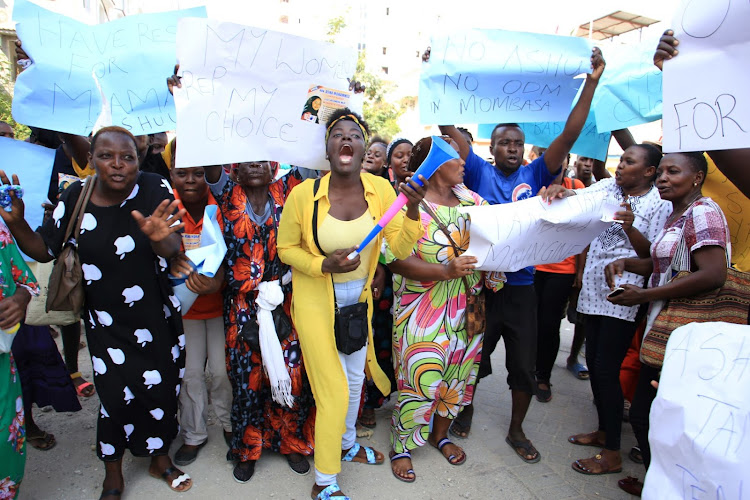 Supporters of different ODM candidates in Mombasa on Friday evening held protests across the county over what they termed as issuance of direct tickets to certain candidates.

They threatened to either ditch the party or vote for UDA aspirants to teach the party leaders a lesson.

In Buxton, supporters of Mombasa Woman Representative Asha Hussein said the party has got it wrong after reports emerged that it had given a direct ticket to her opponent Zam Zam Mohamed.

She was in businessman Suleiman Shahbal’s camp before switching loyalty to Mvita MP Abdulswamad Nassir who is also seeking the ODM ticket for Mombasa Governor.

“Whenever there is smoke, there is fire. We hear of reports that Zam Zam may have been earmarked for a direct ticket. If this happens, ODM will lose a huge chunk of support here in Mombasa,” Zakia Abdallah, a supporter of Asha said.

They staged protests outside the Woman rep’s office demanding fairness.

“If the party banks on loyalty to issue direct tickets, when has Zam Zam been loyal to the party?” posed Rose Anyango.

The ODM supporters said awarding direct tickets instead of holding primaries and letting party members pick candidates will trigger a storm that could undermine ODM leader Raila Odinga’s chances of success in his presidential bid.

The Star understands that the party decision to issue direct tickets is determined by a number of factors, including gender and party loyalty, and not related to popularity.

In Mombasa, there was anxiety in Shahbal’s camp after reports also emerged that his nemesis Nassir will be handed a direct ticket.

“I hear that the ticket will be issued to Nassir on Monday. Let us wait and see,” one of Shahbal’s handlers stated.

The ODM party denied any such development in a statement on twitter.

There was heightened speculation that Nassir was planning a grand homecoming from Nairobi, with supporters being mobilised to welcome him at the Moi International Airport.

However, the plans were shelved and instead, Nassir called for a press conference for Saturday noon.

In Nyali, lawyer Joshua Ndere had a hard time calming his supporters who wanted to block the busy Mombasa-Malindi highway at VOK to protest alleged issuance of a direct ticket to his opponent Said ‘Saido’ Abdallah.

Ndere’s supporters said should the party hand the ticket directly to Saido, they will campaign against ODM.

“We are struggling to contain the emotions of our supporters. We ask that the party leadership give us explanation and direction,” he said. 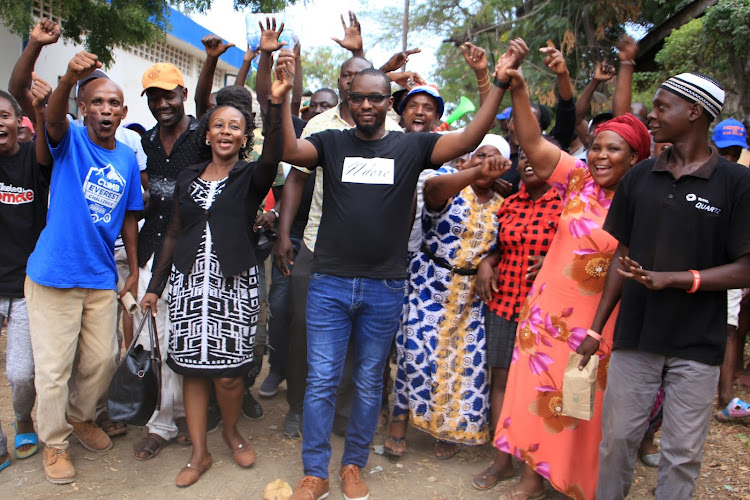 He declined to reveal what they discussed when the ODM National Elections Board called all aspirants from Mombasa to a meeting in Nairobi on Thursday.

“That is an internal matter that we cannot reveal for now.”.

He said party members have been preparing for nominations, set for April 6, spending a lot of money in the process.

He said the party risks losing popularity in Mombasa should anything that is against expectations of members happen.

In Rift Valley and North Eastern, there will be no primaries as the party intends to use consensus to select candidates.

Evans Kidero, Wanga’s opponent for the governor race, said he will be in the ballot by all means.

Political observers Herman Manyora and Gabriel Muthuma said growing displeasure of the aspirants could cause disillusioned voters to stay home and that would hurt Raila's bid.

ODM chairman John Mbadi has said issuing direct tickets may affect Raila’s bid saying he is the leader of the party and takes all the heat if anything happens that displeases supporters.

He said his party boss needs "everyone" to mobilise for his election, especially at the grassroots, and ensure maximum voter turnout.

“I say it is true it can affect us because Raila needs all members of ODM to mobilise our supporters to vote,” Mbadi told the Star.

ODM has not give a direct ticket for Mombasa governor seat to anyone.
News
2 months ago