Parents should be in the front line to protect their children against any harm.

• However, the cases are seem to elevate every time, especially during school holidays. 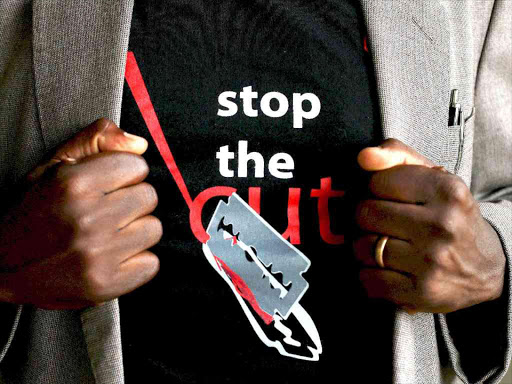 A man wearing a T-shirt with a logo that reads 'Stop the Cut', referring to female genital mutilation.
Image: FILE

Despite FGM being outlawed in Kenya since 2011, it remains a pressing issue in the country, mainly because of archaic beliefs and practices by some communities. Mostly, this practice is triggered by parents who are too deep into old societal norms.

However, former President Uhuru Kenyatta, pledged to end FGM by 2022, but the cases are seem to elevate every time, especially during school holidays. However, the perpetrators take it as an advantage because by then, all young girls aged between 9 to 17 years are at home. This long holiday, we have heard some cases of FGM in some communities.

According to Unicef, four million Kenyan girls and women aged 15 to 49 have undergone FGM, making it 21 per cent. Other reports show at least 200 million girls and women alive today living in 31 countries have undergone FGM. This practice is said to be practiced mostly among the Muslims of the northeastern provinces, particularly among the Somali, Borans and Gabras and other communities from Narok, Meru, Samburu and many others.

According to an evaluation report by anti-FGM organisation, the prevalence of the practice in Narok stands at over 70 per cent. This clearly shows ending FGM in Kenya is not a walk in the park. This is how gender inequality is manifested in our communities and country at large.

However, parents and communities who are still practicing archaic beliefs such as FGM requires basic education for them to understand that FGM is a violation of girls and women's human rights. It denies them a juncture to be what they want to be. Also, they should be taught to understand FGM among the girls is very painful and has a lot of negative effects.

In such, some of long-term consequences include complications during childbirth, anaemia, the formation of cysts and abscesses, keloid scar formation, damage to the urethra resulting in urinary incontinence, dyspareunia (painful sexual intercourse), sexual dysfunction, hypersensitivity of the genital area and increased risk of HIV transmission, as well as psychological effects.

Therefore, it is high time, the government of Kenya develops mechanisms to save young girls and women from FGM. The government passed a law in 2011 to prohibit the practice of FGM in Kenya. Therefore, all parents who allow their children to undergo FGM should be persecuted and punished according to the law. They should serve as examples to others. This will reduce the cases of FGM because parents should be in the front line to protect their children against any harm.

Also, the government should encourage locally led initiatives to fight FGM. This should start from family level with parents, particularly fathers, taking on a more active role in the lives of their daughters. Creating awareness about the dangers of FGM in the communities are some of the most effective ways of fighting the practice.

More so, at the community level, churches should be in front line to fight against FGM. Perhaps by doing this, girls will be safe, achieve their goals and enjoy their lives. The rights of girls should be respected.

Girls should also stand and say no to FGM. They should also facilitate campaigns against the practice.

Constantine Sifuna is a journalism and communication student at Rongo University

FGM prevalence drops by more than half after 24 years - report

The government has enacted a legislative ban on FGM and child abuse.
News
2 weeks ago

The 30-year-old said she aided in the cutting of her two daughters aged 11 and 13 years old.
News
2 weeks ago

Can we also think about the plight of orphaned and vulnerable children, who find hope, help, peace and solace in boarding schools?
Opinion
2 weeks ago

Since December 1, the Kehancha Law Courts have been prosecuting cases involving 38 suspects.
Counties
3 weeks ago
Post a comment
WATCH: The latest videos from the Star
by CONSTANTINE SIFUNA
Star Blogs
19 January 2023 - 05:00
Read The E-Paper