According to KALRO’s projection, Kenya would be slaughtering the last of her donkey species this year

• In three years (2016–18), the four donkey abattoirs situated in four Kenyan counties—Nakuru, Baringo, Turkana, and Machakos—wiped out 301,977 of Kenya’s donkeys

• That was 15.4 percent of the country’s donkey population, according to the 2019 Kenya Agricultural and Livestock Research Organization report, 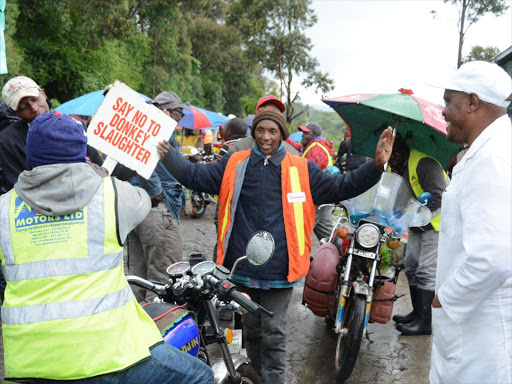 Water vendors protest outside a donkey slaughterhouse in Naivasha over an increase in donkey theft
Image: GEORGE MURAGE

What is it like to look at the very last of something? — Well, 2023 would have been the year Kenya would see the last of her donkey species. To many, this sounds like a fairy tale, a classic from Hollywood’s blockbuster movies that would be christened The Fall of the Beast of Burden.

This would have been a devastating blow to donkey-owning communities living on donkeys' backs, if Peter Munya, the former Cabinet Secretary for the Ministry of Agriculture, hadn't pulled the plug on the infamous trade that threatened to culminate Kenya's donkey population.

Most, if not all, of the people reading this, might be wondering how Kenya would be losing the last of her donkey species this year.

Remember when the country gave the green light to the opening of the first donkey slaughterhouse in 2016, which would later increase to four? Well, that was the beginning of a journey that would end with Kenya saying goodbye to the last of the Equus asinus species.

In three years (2016–18), the four donkey abattoirs situated in four Kenyan counties—Nakuru, Baringo, Turkana, and Machakos—wiped out 301,977 of Kenya’s donkey population. That was 15.4 percent of the country’s donkey population, according to the 2019 Kenya Agricultural and Livestock Research Organization report, The Status of Donkey Slaughter for Skin Trade and Its Implications on the Kenyan Economy.

According to KALRO’s projection, Kenya would be slaughtering the last of her donkey species this year, downing them from Kenya’s donkey population, which was 1,965,632 as of 2016, according to the Ministry of Agriculture and Livestock.

Following protests from donkey-owning communities that were heavily affected by the trade, citing theft of their donkeys, which are their only lifeline, some claimed that women turned into donkeys, carrying heavy materials on their backs.

Munya, had to act quickly, and the first action was to ban the slaughter of donkeys by donkey abattoirs in 2020. While banning the slaughter, Munya said the policy of slaughtering donkeys was not well thought out.

Munya’s move was a saving grace to those affected by the trade. However, it was short-lived after the High Court lifted the ban on the slaughter of donkeys for meat and hide for medicine in the Asian market.

However, Munya’s second move of holding on to the licenses for donkey abattoirs is the sole reason Kenya's donkey population has not been depleted, as slaughter is still illegal in Kenya.

Thus far, Kenyan donkey owners are yet to say "hurrah," not even close, as some still complain that trade in donkey skins is still going on, albeit in a low-key way, a challenge they say could slowly but surely wipe out the donkey population.

With the risk of ending up losing our donkeys, there is a need for the Kenyan government to tighten its belt and seal all the loopholes that could lead to the continued slaughter of donkeys for the Chinese market since it’s a resource that we cannot afford to lose.

Why do we need our African donkeys?

Even though donkeys are crucial to our economic and social activities, most people may not be aware of their significance.

In Kenya, donkeys are responsible for the transportation of rice grown in the Mwea irrigation scheme, which accounts for 86% of local rice production—without the donkey’s input in transporting rice from fields to the mills' rice production would be crippled because the treacherous terrain of the rice fields that can only be navigated by donkeys.

Besides rice production, in four Kenyan counties—Nyandarua, West Pokot, Bomet, and Elgeyo Marakwet—donkeys play a big role in milk transport from the farms to the dairies.

On average, donkeys transport 15,000 liters per day in the four Kenyan counties, according to the KALRO report for 2022. With milk retailing at an average of 36 shillings per liter, donkeys make at least Sh54,000 per day.

Besides their role in the agricultural supply chain, donkeys further help in water transport in arid, semi-arid, and urban areas, helping thousands of households have access to clean water. They also lift loads off women’s backs, which reduces chores among African households, allowing them to send their children to school.

Donkeys also play a big role in generating employment opportunities, with each working donkey making an average of Sh11,390 per month, which enables households to afford basic needs.

With this, Mithika Linturi, the current Agriculture and Livestock Cabinet Secretary, should consider it important and urgent to ban donkey slaughter for skin and other products for export, saving Kenyan donkeys from extinction and preventing donkey-owning hustlers from falling further into abject poverty.

Post a comment
WATCH: The latest videos from the Star
by STEPHEN KIPROP
Star Blogs
16 January 2023 - 05:00
Read The E-Paper