President William Ruto has all the rights to tell the opposition to give him space to run the government.

• Despite, sharp criticism from some quarters, it was a good show by Kalonzo of how winners and losers should interact post elections.

• Whether invited or not, Kalonzo exhibited high level of political maturity. 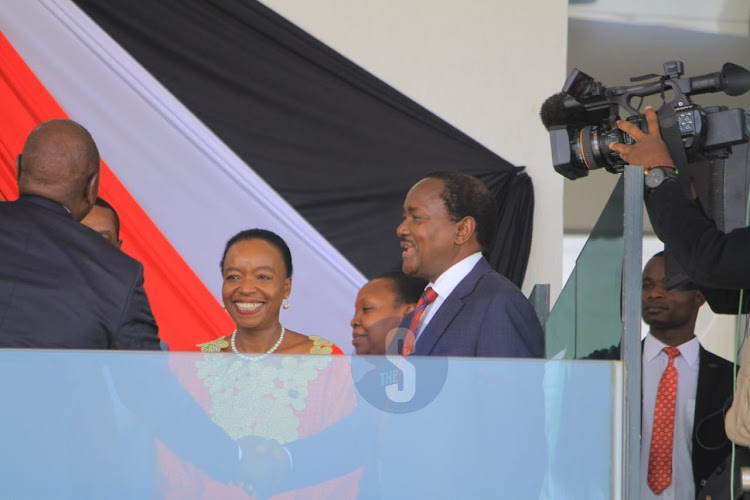 Wiper party leader Kalonzo Musyoka attendance of Mashujaa Day celebrations at Uhuru gardens, was true mark of patriotism and mature politics. It was expected that Azimio leader and his former running mate leaders would have attended the important national celebrations.

It’s not known whether Kalonzo, Raila Odinga, Martha Karua and other opposition parties leaders were invited for the celebrations. Whether invited or not, Kalonzo exhibited high level of political maturity.

Despite, sharp criticism from some quarters which is expected, it was a good show by Kalonzo of how winners and losers should interact post elections, since all political leaders call Kenya home.

Before the coming of Multi-party politics, any dissenting voice that criticised the then KANU government was met with strong force that gave birth to the infamous Nyayo torture chambers. After the coming of multi-party in the 90s, still the opposition didn’t have freedom of speech and expression. There was arbitrary arrest of opposition party leaders. Kenya has come of age and opposition parties should be viewed as partners in nation building, though they are not in the government.

President William Ruto has all the rights to tell the opposition to give him space to run the government. Likewise, the President should allow voices of dissident to keep the government in check and remind him of ruling party pledges to Kenyans.

Kenya Kwanza coalition is the ruling party and automatically Azimio and any another parties becomes opposition. In mature political environments, Opposition parties become part of the country’s governance through various ways. Ruling coalition govern through their majority in parliament and at times can overcome opposition to formulate draconian laws.

The role of the opposition is to hold ruling government accountable through legally accepted means such as in parliament, courts and decent advocacy devoid of insults. Being an opposition leader or MP does not mean you should always be in battle with government.

In the last government, before handshake, ruling Jubilee party muzzled some laws but some opposition MPs together with concerned citizens went to court to stop the implementation of the said laws. Notably, the people’s defender, now the Busia Senator Okiyah Omtatah, is now at   bird’s view to zealously keep the government in check. Rather than use of violence, the Azimio leader has talked of taking the government to court to stop use of GMO foods. This is commendable for the opposition and they need to do more if they have to keep government in check.

However, as part of the Kenyan spirit the opposition should also be quick to complement the government when it does what is for the common good.

The Azimio opposition party can encourage members to draw bills that will help all Kenyans. For instance, if Azimio MP can draw legislation that can lower some taxes so that food prices can go down. It will be recorded in Hansard that an opposition MP made a difference in Kenyans life.  Though suspended for now, The Constituency Development Fund (CDF) act that was passed by the 9th parliament in 2003 has helped many Kenyans achieve their goals through education bursaries, building of schools and police stations among many other. Though in some instances CDF has been abused, generations after generations will have positive stories to tell.  Today, none remembers whether the CDF act was passed by ruling or opposition parties MPs.

The opposition can make parliament place of honour not dishonour as witnessed in some instances. Chest thumping, name calling, show of mastery of English cant aid in nation building. A handshake is not necessary since it might compromise the role of the opposition as a watchdog.

Post a comment
WATCH: The latest videos from the Star
by MARTIN OLANDO
Star Blogs
22 October 2022 - 10:14
Read The E-Paper