Time will tell whether Millionaire Hustlers cares for Mama Mboga.

•This is substantial money that can do meaningful development in the country.

•While  it is not a crime to accumulated clean gotten wealth and it complicates the meaning of Hustler platform, on which the Kenya Kwanza government rode on to power. 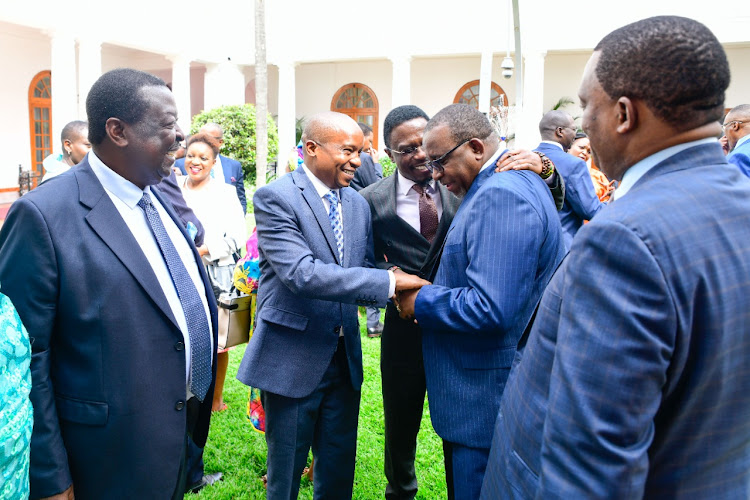 CS for Interior nominee KIthure KIndiki among other leaders at State House on October 20,2022
Image: PSCU

On the first day of  the vetting of Cabinet Secretaries one thing was outstanding. The total public declaration of wealth worth by five proposed CS was stunning Sh5 billion.

This is substantial money that can do meaningful development in the country. While  it is not a crime to accumulated clean gotten wealth and it complicates the meaning of Hustler platform, on which the Kenya Kwanza government rode on to power.

According to Kenya  Kwanza Hustler  narrative proponents, hustlers are the real people who struggle each and every day  to make ends. This group may include Mama mboga (lady vegetable seller),boda  boda riders matatu  touts and in general the  poor masses. On the contrary, Collins dictionary definition of Hustler  carries two meanings , an enterprising  person  determined  to succeed, go getter  and slang  a person  who employs  fraudulent  or unscrupulous  methods  to obtain money.

Kenya, is democracy where every vote count. Since the poor form majority of the population, their vote can change the country’s trajectory. In majority Africa, the poor will always elect the rich because of the promises and handouts. Is common to see many jobless Kenyans melting under hot sun or braving heavy rains to listen   to politicians in rally who  are in rain coats, shielded with umbrellas. Later, the poor Kenyans will walk home to sleep on an empty stomach and wake up early morning to vote the politicians to govern them.

During political campaigns, politicians from all divide   enticed the populace   by giving promises   that seemed sweet but economically impossible to achieve.  For instance, the Opposition Azimio team promised Sh 6,000 every month to the less privileged. It remains a mystery how that would have been achieved

It  was expect  that since  Kenya  Kwanza rode on Hustler narrative ,the Mama Mboga's, Boda boda riders or at least low income earners would occupy top  decision making  post such as  Cabinet Secretaries (CS) in government. The CS are policy makes in the government who influence important decisions in daily running of the government.

According  to Chapter 9 of the Kenyan constitution on the Executive , CS  are accountable  individually and collectively  to the President  for the  exercise  of their powers  and the performance  of their functions. It follows that they will play key role in helping the President run the country and achieve his goals.  If they are “real hustlers” they will help the president achieve the hustler goal.

The much talked about Hustler fund was to give loans interest free. But after crossing over the Jordan River there is no honey and milk for the real Hustler, since   the Fund will not be interest free. For, Mama Mboga and the ilk their expectation was of interest free loan as the Hustler narrative was being packaged.  For those who reasoned from an economic perspective it was totally impossible to have interest free loan to millions of Kenyans.

The 1789 French revolution that brought real changes in France was led by peasants against the monarchy of Louis XVI.  There was lessening of economic burdens by lowering of taxes since most of the peasant farmers and working class of France were spending 90% of their daily income on bread. Real change can only be felt if it is led by the poor who bear the brunt .It’s only the wearer of the shoe who knows where it pinches more.  Therefore, it is only the poor in Kenya who understand the high cost of Unga, Bread and Fuel.    The Millionaire Hustlers can never bring real Hustler change because they do not understand   what Hustler Kenyan context means.

The Mama Mboga has no access to affordable healthcare, high cost of living, insecurity among many others.  All these are  caused by myriad social, economic and political factors.  Good political choices and manifestos drives out poverty within time.  Time will tell whether Millionaire Hustlers cares for Mama Mboga.

Post a comment
WATCH: The latest videos from the Star
by MARTIN OLANDO
Star Blogs
21 October 2022 - 08:48
Read The E-Paper