MUREITHI: Fake news, a threat to democracy as Kenyans vote

The digital space, and more so social media, is a perfect platform for spreading this disinformation.

•Since the campaign period started, the country has witnessed an increase in such content.

•Imposter content has also been on the rise. This is fake content that purports to come from a real and credible source. 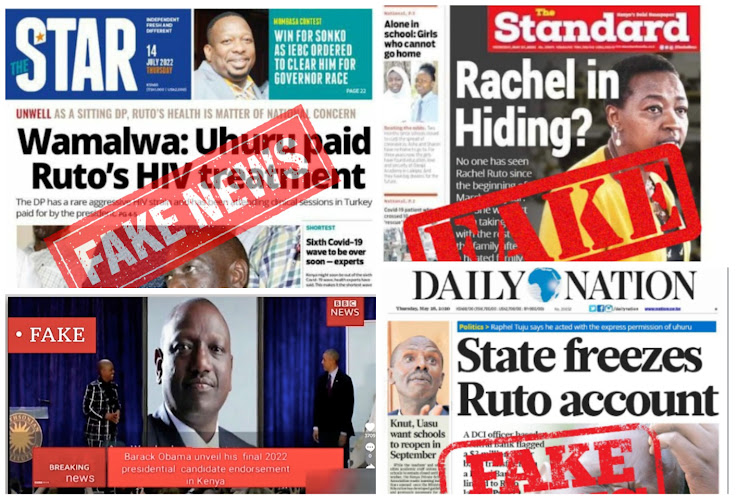 Falsified newspaper headlines, wrongly translated videos and statements reported out of context are once again dominating the conversation in and out of social media
Image: COURTESY

With the advancement of technology and smartphone usage expanding, digital dissemination of information during this election has become critical.

Dissemination of news and or information related to elections has been in real time. This is a very positive thing.

However, this digital advancement is increasingly becoming a headache for the country’s young democracy.

And this headache is mostly as a result of spread of distorted information or fake news.

This “information disorder” will continue to be a big challenge to the country during this election and beyond.

Some of the distorted information can easily qualify to be a threat to national security.

Barely days ago, Director of Public Prosecutions Noordin Haji asked Inspector General of Police Hillary Mutyambai to investigate the case of a doctored video that was widely shared on social media.

The video published on August 2 was manipulated to show that Deputy President William Ruto was profiling certain ethnic communities residing in Rift Valley and declaring shame on them. The video was released barely a week before the general elections.

With political stakes high, it was expected that some politicians or their supporters will employ tactics of misinformation and disinformation to achieve certain goals. Desire for political influence - manipulated information can be a powerful tool to sway public opinion and can be used to sway people’s perceptions.

The digital space, and more so social media, is a perfect platform for spreading this disinformation.

It is written and published with the intent to mislead in order to damage an agency, entity, or person, and or gain financially or politically, often with sensationalist, exaggerated, or outrightly false headlines that grab attention.

Misinformation mostly consists of viral messages that may be shared quickly without checking first, and occurs on a variety of platforms such as messaging apps, social networks, and occasionally, mainstream media.

Many times a person will receive a message, for instance through a WhatsApp group or from a friend and immediately clicks forward without verifying if it’s true or false.

To this person, the intention of forwarding will be just to inform friends or relatives, sometimes with a genuine concern and not to harm anyone.

But in some cases, the person will find him or herself a victim of misinformation if the original message was not true.

Quite often, misinformation is spread by well-meaning people who are known to us. But propagators of disinformation use other actors, such as fake accounts, bots and trolls.

The DP video is a clear case of manipulated content which possess a great threat to the stability of a nation.

Such manipulated content can easily erode a country’s democracy.

Since the campaign period started, the country has witnessed an increase in such content.

Imposter content has also been on the rise. This is fake content that purports to come from a real and credible source.

Mainstream media houses including The Star, the Standard, Nation, Citizen TV and so many others are increasingly becoming victims of imposter content. In some cases, they are victims of completely fabricated text or visual content.

To start with, this information disorder is fragmenting audiences. But how? As audiences increasingly get their information from hyperpartisan sources, mis- and disinformation can reinforce perceptions and create echo chambers, irreparably damaging the public square.

It can also undermine the work of good faith actors. This is because mis-and disinformation can be used to target those working to advance the cause of democracy, including journalists and human rights activists.

It can also be used to undermine the credibility of critical institutions such as the Independent Electoral and Boundaries Commission, the Judiciary and the police.

Misinformation and disinformation can also undermine our democracy by fostering conspiratorial thinking. It can lead to disdain for information that does not fit a certain theory, which is then woven and reinforced into a broader pattern, for example, that the election has been stolen.

With the country holding the general election on August 9, it is important to make sure that the content people are consuming and sharing is credible.

The media will be expected to play a big role in fact-checking, which is a critical component of this electoral process.

It will also be important for key institutions, such as IEBC, the interior ministry, the ministry of ICT to consider setting up coordinated fact-checking initiatives.

They should consider having teams assigned responsibilities, including collecting, examining and counter-checking available information and releasing the correct information to the public in real time.

This initiative should not be just for the election period. It should be a permanent feature.

By doing this, the government will be actively participating in dealing with the information disorder problem.

The initiative will help in ensuring the country does not fall into the overregulation trap. This is because over-regulation leads to closed societies and it’s not good for democracy.

The writer is the Radio Africa Group Digital Editor

The views expressed in this article are personal

The letter is misleading as it was not authored by Makau.
News
2 weeks ago