It is not about rewarding WHO but ensuring basic Kenyan laws are respected.

•Kisero is, I would imagine, a distinguished journalist who worked under the tutelage of the late Hilary Ng’weno at The Weekly Review.

•On this assignment, however, he set the bar very low. The article was lacking in basic facts. 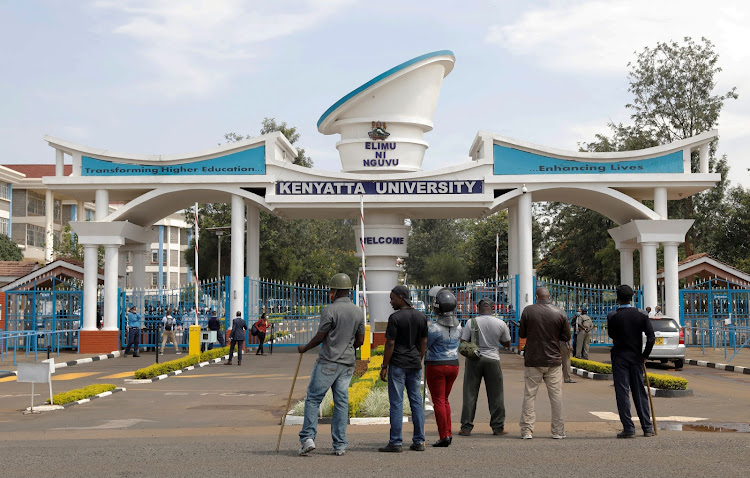 Kenyan police officers stand in front of a gate where quarantined travellers protest being held because of the coronavirus disease (COVID-19) outbreak for more than the usual 14 days at Kenyatta University near Nairobi, Kenya, April 15, 2020. REUTERS/Baz Ratner

There is a certain level of admirable ignorance in Jaindi Kisero’s article titled “Give WHO land for “our” hospital” that was featured on DN page 18, July 20.

Kisero is, I would imagine, a distinguished journalist who worked under the tutelage of the late Hilary Ng’weno at The Weekly Review.

On this assignment, however, he set the bar very low. The article was lacking in basic facts.

Many Kenyans would love to have a WHO office based here, along with the UNEP in Gigiri, ILRI in Uthiru and ICIPE in Nairobi.

These distinguished organizations speak to the centrality and stability of international organizations having Kenya as their head office.

The measure has a multiplier effect as it creates jobs and gives Nairobi gravitas as a centre of international excellence in a third-world territory.

It is not about rewarding WHO for what it did at the height of the pandemic it’s about ensuring basic Kenyan laws are respected.

In Uganda and Rwanda’s case which Kisero cited, I would be shocked if the basic principles of land law were ignored to give organizations a base to carry out their activities.

It appears Kisero would rather we sacrifice our constitution and laws that govern land acquisition in order to, as he argues, “create employment, stimulate high-end property development and boost travel and conference tourism”.

Kisero then goes into a long rusty diatribe about international bodies assuming economic significance after tea, coffee etc, remittances as a source of hard currency etc.

This information fails to address the basic facts about the illegal attempt by our top Government institutions to unilaterally acquire Kenyatta University land.

In 2001 Kenyatta University recognized genuine squatters on its land and opted to give them a portion of its land known as the Kamae settlement.

Later, another set of squatters descended on its land.

In the matter of Kimani Mbugua and others vs. Kenyatta University of ELC no. 1460 of 2002 which has been adjudicated by the courts, the same has upheld repeatedly that the squatters have no rights of the title of possession to KU land.

Secondly, there can never be a claim of adverse possession over public land.

To reward fraudsters at the altar of political expediency would be a grave injustice and defeats the purpose for which the KU land was set out for: to educate the next great generation of Kenyan leaders.

KU has a master plan which was partially executed by the former VC Prof. Olive Mugenda and current VC Prof. Paul Wainaina.

The plot would throw the master plan into total disarray including a major hostel project that was ironically initiated by Prof. Mugenda under the PPP model to accommodate 10,000 students.

KU has no idle land, all land is planned for as argued by the disbanded University Council.

Powerful forces appear to have initiated an agenda to subdivide KU land and treat the same almost like personal property.

With regard to the KUTTRH: Prof. Mugenda is on record for having refused to allow KU medical students to do their practicals and they have to be shuttled to Kiambu level 5 hospital.

She also declined to have KU students who had come up with a medical ventilator at the height of the pandemic conduct clinical trials at the hospital.

Further, she removed two board members representing KU from the KUTTRH board on the pretext of a gazette notice that has never been authenticated.

In September 2021, the Parliamentary Departmental Committee on Health published a report on the state of the KUTTRH and stated as follows:

1. It directed that the CS for Education and Health to ensure that KU students from the College of Medicine have full access to Hospital

2. Directed that President Kenyatta revoke Legal notice number 4 of 2019 that established the hospital as a state corporation within 6 months of the adoption of the report. N

None of the above has been implemented to date.

If Kisero found the KU VC tearing up a point of amusement, he will be pleased to know the VC was heartbroken about the many hundreds of students who may now lose their dreams of hostels.

Many of them are forced to live in informal settlements as victims of rape, murder and robbery because the University is unable to provide them with accommodation on campus.

As an experienced journalist, I would have expected Kisero to interrogate the attempted illegal land acquisition through the lenses of an experience and well-researched journalist covering all the five W’s in journalism.

Should the hospital be managed by KU? Parliament has already pronounced itself on this matter.

But if Kisero thinks KU is a jua kali garage about to be gifted with a brand new car, he will be pleased to know the jua Kali artisans (KU students) developed a mechanical ventilator from scratch at the height of the pandemic.

KU ICT students recently emerged on top of the world in global competition and Law students have recently toped in Africa in moot court competitions.

To cap it all, the KU football team will represent Africa at the Federation of International Universities World Cup in China next year.

If Kisero is daring enough to donate that BMW to KU, don’t be surprised if the engineering students  convert it into a spaceship heading to Mars

"The WHO must be stopped from becoming an agent of land-grabbing in Kenya."
News
6 months ago

The sacked group has also been prevented from accessing KU premises.
News
6 months ago

Genesis of KU land tussle linked to control of hospital