One would have expected a sharp rise in the appeal of the candidature of Raila in Mt Kenya region.

• It may not be clear if Kalonzo still commands majority of Ukambani votes but if he will not support Raila, it will be huge blow to the Azimio coalition.

• The Kenya Kwanza team has consistently been preaching the same message of economic empowerment. 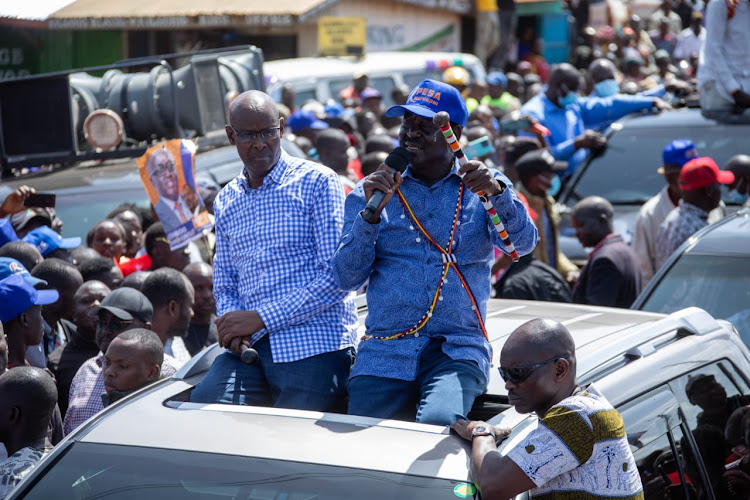 Kenyans could be wondering why the dynamics of politics still remain constant like it were one year ago for the Kenya Kwanza team.

It is, however, different for the Azimio La Umoja-One Kenya Alliance after the side unveiled Raila Odinga’s running mate.

Areas where the Kenya Kwanza flag bearer, Deputy President William Ruto drew support remained constant after he unveiled his running mate. One would have expected a sharp rise in the appeal of the candidature of Raila in Mt Kenya region after he appointed Martha Karua as his number two if they get elected into office. But technically, it hasn't happened.

Instead, him not naming Kalonzo Musyoka as running mate appears to have complicated the former Prime minister’s bid.

It may not be clear if Kalonzo still commands majority of Ukambani votes but if he will not support Raila, it will be huge blow to the Azimio coalition.

If you calculate the number of votes Raila got in 2013 and 2017, Ukambani and the Mulembe Nation played the biggest role. Mt Kenya has no record of voting for him, thus not enough evidence to suggest that the pattern would significantly change this time around.

Mt Kenya is seemingly a Kenya Kwanza zone and whether Karua will deliver the required numbers remains to be seen, if her past political engagements in her county are anything to go by. On the other hand, ANC party leader Musalia Mudavadi and his Ford Kenya counterpart Moses Wetang’ula are keen to deny Raila a sizable chunk of the votes in western.

By not appointing Kalonzo, Raila lost the appeal of majority who voted him in the last election from the Ukambani region. It means more factions in the region have divided the vote.

By appointing a running mate from Mt Kenya and not Ukambani, Raila lost both blocs. In fact, I see this as a serious blunder. Politics is brutal and savage, and the miscalculation may cost him.

The Kenya Kwanza side led by William Samoei Ruto has on the other hand made the campaign about the Citizenry such that they didn't focus much on division of power after naming of Rigathi Gachagua as the presidential running mate.

The team has consistently been preaching the same message of economic empowerment.

Kariuki Ngunjiri is a political analyst.

The promise of devolution is being choked by corruption.
Opinion
1 month ago

KAGONI: What the next President should learn from Kibaki

We are middle class country lower carder and therefore we must change our thinking.
Opinion
2 months ago
WATCH: The latest videos from the Star
by KARIUKI NGUNJIRI
Star Blogs
30 May 2022 - 13:13