We cannot continue behaving as if nothing happened.

•We cannot continue behaving as if nothing happened and should talk about these and what remedial action should be taken against the perpetrators. 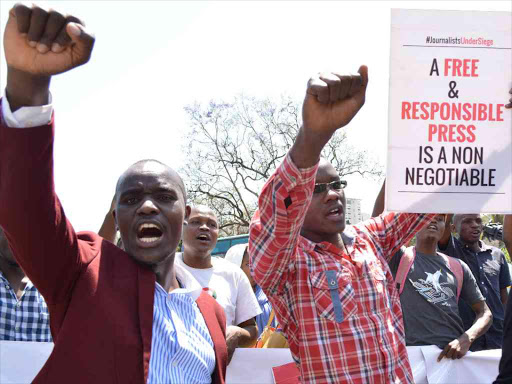 A file photo of a group of journalists demonstrating against the harassment and killing of their colleagues.

The onset of Covid-19 containment measures by the Government of Kenya in March 2020 saw an increased violation of press freedom and access to information.

Hopefully, as the world marks World Press Freedom Day this year, stakeholders will note this and propose measures to deal with the issue.

We cannot continue behaving as if nothing happened. We should talk about this matter and propose remedial action to be taken against the perpetrators.

In addition to the impact of government-imposed measures such as work from home, social distance, and use of protective gear among others, the media industry introduced its measures aimed at cutting down costs for doing business and ensuring the protection of staff.

In consequence, several journalists were hit by the pandemic resulting in some being sent into isolation centres, getting ill and reported deaths, and or family members being infected.

Just like the rest of the world, the Covid-19 pandemic had a tremendous impact on the media.

Leading media outlets in Kenya including the Nation Media Group and Standard group reduced their workforces and salaries by between 10 per cent to 50 per cent among other cost-cutting measures.

According to a report released last week by the International Peace Institute, the state of press freedom globally has gone down.

The report cited Africa as among regions where increased arrests, censorship and physical attacks have escalated during the COVID-19 crisis.

Kenya is not listed in the extreme brackets but not to say that all is flowing smoothly.

All mainstream media houses have resorted to salary cuts for staff, which has become a global trend due to the economic crunch.

However, the least that could be asked of media houses is to guarantee jobs.

The Media Council of Kenya commissioned a study that established increased press freedom violations, loss of jobs, safety concerns including stress and trauma, closure of media outlets and more importantly, increased innovations and creativity by individual journalists and media houses

The economic downturn resulting from the Covid-19 crisis has brought investments in advertising to a screeching halt.

The disruption has hit private broadcasters hard since they depend almost entirely on advertisement revenues.

While there is scant information about the exact figures for financial losses occasioned by the pandemic, industry estimates suggest that advertising revenues may have gone down big time.

All major broadcasters announced salary reductions ranging from 5 to 50 per cent in the first quarter of 2020.

The media houses also declared redundancies in an attempt to remain afloat in the face of falling revenues and rising operation costs.

As they sought to cover the pandemic journalists and media practitioners were exposed to the daily risks of infection in the line of duty.

Attacks and harassment of journalists violate several Constitutional provisions in Kenya including, Articles 25 (freedom from torture and degrading treatment), 28 (freedom to be treated with dignity) 29 (freedom to security) 33 (freedom of expression), 34 (media freedoms), 35 (Access to information and 41 (on labour rights). nationally.

As we mark this day, I remember the many declarations stakeholders have made towards dealing with the menace.

It is interesting that a statement by former editors' chairperson Linus Kaikai on attacks on the industry still remains relevant and remembered more than any other relevant interventions on the safety of journalists by the industry.