Economic centre of gravity is inexorably moving toward the developing South.

• South-South foreign direct investment (FDI) flows have also expanded and are expected to account for one-third of global FDI flows.

• This impressive growth in the global South’s contribution to the world economy has been realized against the backdrop of declining North-South trade and aid. 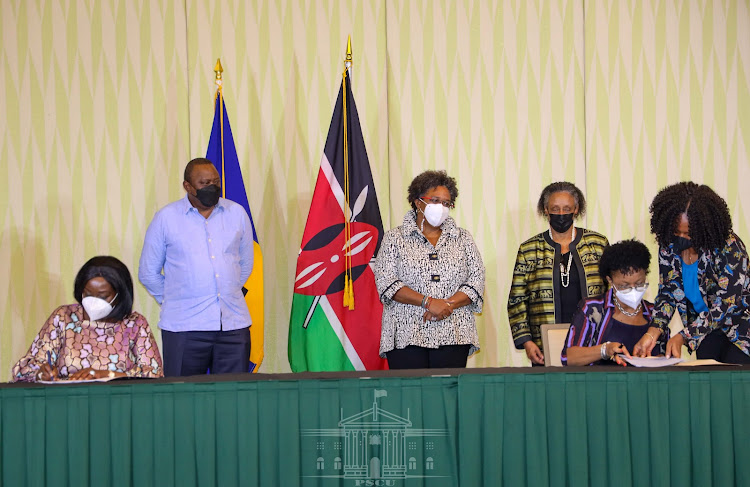 The rise of the Global South has been attributed to increased trade and investment, accelerated regional integration, and enhanced sharing of knowledge and technology among the low and middle-income nations of Africa, Asia, Latin America and the Caribbean.

The most visible manifestation of this increasingly influential grouping of States is the South-South cooperation framework on tackling political, economic, social, cultural and environmental issues facing the countries that make up the Global South.

As the Indian diplomat Hardeep S. Puri notes, “a fundamental transformation has taken place in the global economy …… The economic centre of gravity is inexorably moving toward the developing South.

The remarkable upsurge in cooperation between developing countries, characterized as South-South cooperation, must be understood as part of this larger story.”

This assertion is backed by numbers as evidenced by the sharp rise in South-South trade volumes from $2.6 trillion in 2007 to $4.5 trillion in 2017 representing an increase from 19 per cent to 28 per cent of global trade, according to UNCTAD’s 2018 World Investment Report.

South-South foreign direct investment (FDI) flows have also expanded and are expected to account for one-third of global FDI flows.

This impressive growth in the global South’s contribution to the world economy has been realized against the backdrop of declining North-South trade and aid.

The historical inequalities inherent in the North-South developing paradigm, where the rich nations are seen as dictating the terms as a condition for aid, has provided the impetus to the quest for constructive engagement among developing countries.

Economists like Samir Amin and Arghiri Emmanuel allude to a ‘hidden transfer of value’ from the South driving high levels of income and consumption in the North in arguing for a more equitable global engagement between developed and developing countries.

They estimate that, for instance, the global North has drained over $ 152 trillion in natural resources and commodities from the South from 1960 to date.

Imbued with a sense of shared history, culture and identity, nations comprising the Global South have thus stepped up technical support and knowledge exchange among themselves in an attempt to reverse the disparities emanating from this lop-sided arrangement while accelerating their economic and social development.

South-South integration is therefore viewed as a catalyst for rebalancing the global economy and driving a new agenda around foreign trade, investment and aid.

Trade and technology exchange is essential in fostering and deepening mutual assistance in this context.

However, proponents of South-South collaboration concede that the relationship with the developed North remains crucial to realizing the development goals of emerging economies.

In other words, advancing the cause of the South does not necessarily mean dismantling the North-South model, rather the two are complementary.

Kenya has been an important champion of South-South cooperation. In 2009, the United Nations High-Level Conference on South-South Cooperation was held in Nairobi. The high-level meeting adopted the National Outcome Document - the roadmap for South-South multilateral engagement to date.

Prior to hosting the 2009 conference, Kenya had established the South-South Technical Standing Committee in 2007.

These policy measures have coincided with Kenya’s heightened activism on the Global South agenda, most prominently in Africa, Caribbean and Pacific (ACP) league of nations.

ACP has emerged as a strong leader of South-South dialogue and this is where Nairobi’s prominent role in South-South partnerships has been most notable.

That President Uhuru Kenyatta was elected the President-in-Office of the Organisation of African, Caribbean and Pacific States (OACPS) underscores how Kenya’s diplomacy on Global South issues is bearing fruit.

There is also the Caribbean Community (CARICOM) forum whose first Heads of State and Government meeting with the African Union that Kenya hosted virtually in September last year.

Kenya now has an ambassador to CARICOM as the country positions herself as the bridge between Africa and the countries that form the Caribbean Community.

The visit to Kenya by the Prime Minister of Barbados, Mia Amor Mottley, saw the two nations enter into partnerships for the training of health professionals and the promotion of tourism.

Another critical pillar of Kenya’s renewed effort to tap into the South-South economic transformation is through the African Union’s 21st Century Pan-African agenda which includes the African Economic Community (AEC) and the African Continental Free Trade Area (AfCFTA).

Kenya has a long history of supporting Pan-Africanism dating back to the struggle against colonial rule.

The African Union Pan-African agenda fits in naturally with Kenya’s political support for the emancipation and empowerment of Africa and the Caribbean.

As the leading economy in East Africa, Kenya also stands to gain from AfCFTA, a large market with an estimated 1.3 billion people and combined GDP of over $ 3.5 trillion, by leveraging growing regional and continental trade to grow its exports.

At a bilateral level, Kenya recently signed a raft of pacts with South Africa to strengthen trade and investments between the two countries, currently at $ 580 million annually and favouring South Africa.

Easing visa restrictions was also part of the deal. This is just one example of the positive gains Kenya has achieved as a result of her revamped South-South diplomacy.

The opening of a trade mission in the Democratic Republic of the Congo, designed to boost bilateral trade and investment between the two countries, is another example.

In summing, sustained integration of South-South cooperation into Kenya’s international policy is imperative in reshaping relations with the rest of the world.

As a middle income developing economy, and an economic hub in Africa, Kenya enjoys several advantages including a well-trained and knowledgeable workforce.

Harnessing knowledge exchange with other developing nations should be a central strategy in strengthening relations with countries in the Global South.