There are more threats to our national unity than some of the sporadic emotions we show.

•We lack a sustainable and structured way of dealing with people who are a threat to peace and national unity as a country while the community are the biggest enablers of insecurity in this country; the leaders just respond to the community pressure to air out their believes.

• Look at the cheers and jubilations that greet such statements that we perceive to be hate or dangerous when they are made. 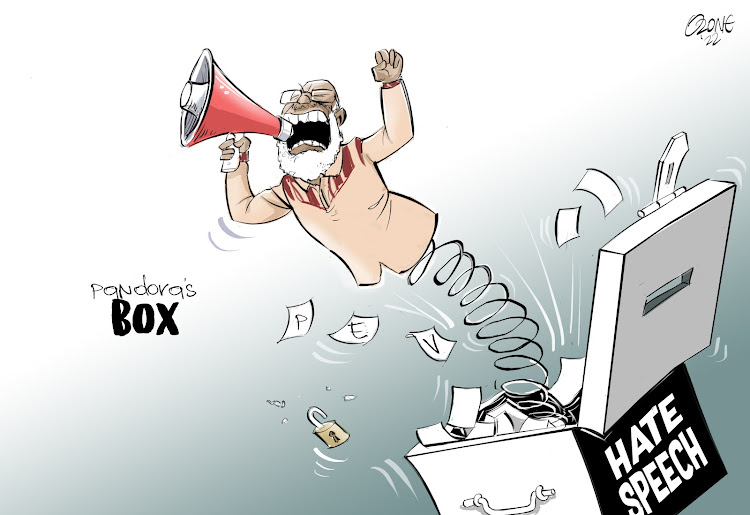 Prosecuting hate or dangerous speeches in Kenya just like in the rest of the world has remained elusive because of lack of universal definition of the terms.

Hate speech especially remains very vague in our laws, which has seen perpetrators use technicalities to frustrate its prosecution. Given the ease of escape from prosecution and pressure on relevant institutions to be seen to be doing something, there is always sporadic attempts to deal with such cases where its seem to be hate speech especially by politicians through the media more recently digital platforms, with the same results; non convictions and threats to freedom of expression.

We lack a sustainable and structured way of dealing with people who are a threat to peace and national unity as a country while the community are the biggest enablers of insecurity in this country; the leaders just respond to the community pressure to air out their believes. Look at the cheers and jubilations that greet such statements that we perceive to be hate or dangerous when they are made.

Every time guys make speeches that are perceived to be hate, dangerous or merely political, we quickly tie them to the 2007/08 Post-Election Violence (PEV) in Kenya that led to among other things the establishment of the National Cohesion and Integration Commission (NCIC).

We never express as a society that lies in such incidents that threaten national unity and democratic rights of others are wrong and detestable in this century but merely of what happened then.

Our homes, schools, public institutions, churches, bedrooms, streets and politics are full of hate, discrimination and dirt, but we only condemn those heard through the media. In fact the media and other avenues of freedom of expression are harassed and intimidated more than the perpetrators.

While reports on the 2007 PEV have documented the roles played by the media and politicians in fanning the ethnic clashes and violence, this should not be used to curtail responsible freedom of expression in the country. There are more threats to our national unity than some of the sporadic emotions we show whenever there is freedom of expression that irritates us.

Threats to national unity must be condemned by the all of us, not because of what happened, but because they are out of tune with civilised people. Society should not tolerate such leaders and in addition to legal interventions, socially, politically and culturally such peoples must be held accountable for the disruptions they cause to our country.

There are enough laws on the same; what is giving fodder to such criminal behaviour is the society, which seem to support and cheer their political leaders whenever they threaten national unity and security.

Let’s use the established thresholds on hate speech not our emotions to arrive at conclusions.

The National Cohesion and Integration Act which establishes the NCIC makes discrimination on the basis of ethnic, religious, or racial grounds a criminal offense, bars comparison of persons of different ethnic groups and makes it is illegal to harass another person based on his race or ethnicity. In addition, the Act criminalizes hate speech, which it defines to include threat, abusive words/action or material and public plays meant to fan ethnic, racial or religious hatred.

Similarly, the Media Council Act of 2013 outlaws the use of media forums to spread hate speech and stipulate stiff penalties on the same.

MCK has been running a project on media and hate speech over the years and aware that with the 2022 politics on the cards, journalists must be aware not to be pushed into carrying the cross for others.

The focus on media arises from the past reports that accused the media of irresponsible reporting that leads to electoral violence, ethnic hatred and the tendency to focus on sideshows and non-issues instead of information that would inform, educate and sensitize the public to make decisions that bring about positive change.

However, such complaints must be received and reviewed in context. Kenya has a constitutional guarantee to freedom of expression and access to information under Articles 34 and 35 while at the same time as a signatory to several regional and international conventions providing for freedom of expression.

While it is within the States mandate to legislate against hate speech as provided for in Article 20 the International Covenant on Civil and Political Rights, such regulations must not infringe/ curtail freedom of expression and access to information.

Measures to handle hate speech should not impede on the peoples’ right to free expression Carte blanche attempts to contain hate speech may grossly violate the rights to freedom of expression, press freedom and access to information if not done within permissible restrictions in international law.

Relevant agencies must be more proactive to ensure that people or groups intent on or deemed to be causing hatred and national disunity on whatever grounds are cautioned against such in time to while at the same ensuring that their right to freely express themselves is not curtailed.

Media should stop repeatedly using hate speech statements by leaders during broadcasts as backgrounders, allowing people to use media platforms to spew hate messages and live programs including live coverage and on-air call-in sessions will require professional handling. Media must activate the use of delayed broadcast button as we up the game of managing live transmissions both on digital platforms and traditional media.

Considering the challenges of prosecuting hate speech, a review of the electronic evidence requirement might be necessary.