The man was every bit the brilliant, funny man we have always known him to be.

• To say it was the highlight of my life to meet and chat with this historic figure would be an understatement.

• The man was every bit the brilliant and funny man I and others have always known him to be. 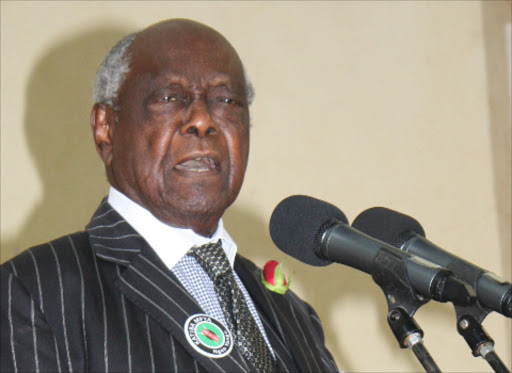 On June 4, 2013, I received an email from a senior editor at the Star which informed me that someone from former AG Charles Njonjo's personal office, called The Star to ask for my email.

The editor suggested this had to do with a column I wrote that week about how the Supreme Court had rendered the worst decision in the court’s history, comparing the decision to an infamous one made by the United States Supreme Court known as Dred Scott v Sandford.

In that case, the US Supreme Court infamously held that black American slaves were property to their owners and had no constitutional rights.

I made the case in my column that the then Chief Justice Mutunga led court was equally morally and legally wrong in dismissing the petitions of Cord presidential candidate Raila Odinga and AfriCog.

Whatever the reason, I was more than thrilled that the man many affectionately refer to as Sir Charles Njonjo or the “Duke of Kebeteshire” wanted to get in touch.

I did not receive an email from his office, but the editor informed me a few days later there was a new plan.

According to the editor, it had been agreed that a lunch meeting be set up for me to have lunch with the Star publisher, the editor and Sir Charles.

This was at the request of Mr Njonjo himself who assumed I was based in Nairobi but was told I live in the US.

However, Njonjo was told I do come home regularly to which he said that the lunch meeting be arranged for the next time I came back, which happened to be two months later in August 2013.

The publisher, the senior editor and I had the much-anticipated lunch with Njonjo at Nairobi Club.

To say it was the highlight of my life to meet and chat with this historic figure would be an understatement.

The man was every bit the brilliant and funny man I and others have always known him to be.

As I would tell him later, I was awed by his brilliance and aura during an impassioned speech he gave in Parliament in 1983 denying the allegations of treason that were being bandied around.

It was the first and last time I watched live proceedings in Parliament from the public gallery, but the experience had a lasting impression as it cemented my passion for politics and quest for justice.

During this amazing lunch, Njonjo gave me his phone number and asked me to keep in touch.

I did just that and on my next trip to Kenya, I met him at his office in Westlands next to Sankara where I used to stay without knowing that Njonjo was one of the owners.

In my second meeting with Njonjo, I raised the prospect of penning his memoir to which he immediately had a broad smile, paused and simply said this is something many have asked him, but he had no desire to ever have his memoirs published.

However, he did not completely close the door; rather, he kept it open, and we would occasionally revisit the issue whenever I called him from the US and every time I visited him at his office over the years.

On my last visit with this statesman, he was categorical in saying no, he would not have me pen his memoirs, and neither would anyone else.

That is who the man was at the core: very private and never believed in “spilling beans” so to speak.

I know from the tidbits he shared with me, some of which are comical but what the man knew was tantalizing and would have made a best-seller besides being informative.

I and others tried but that will now never be known he being the last person alive from Kenyatta’s cabinet—and Oh, what he knew!

Njonjo was a great man and very much one of the founders of our country which he helped shape her politics of the day and his contribution will be forever emblazoned in our country's history.

I am honoured to have met and interacted with him.

May he Rest in Peace.