Time to provide Gikomba traders with legal protection they deserve

The time is now for this government to deliver on its promises.

• MCAK is also calling for the immediate release of findings of the public investigation into the fires, ordered by the President in 2017.

• MCAK is calling for the adoption of policy measures to facilitate the formalisation of informal trades such as a mitumba in Nairobi County. 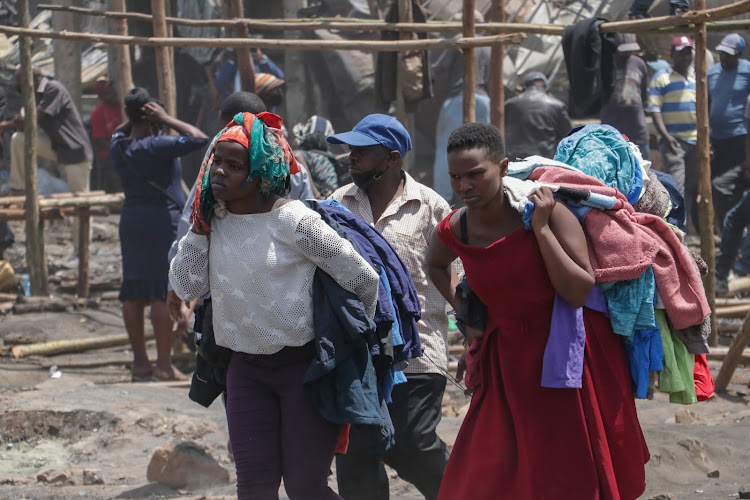 Two ladies carry secondhand clothes for sale on November 10, a day after a fire consumed a section of the market amounting to huge losses to the traders.
Image: WILFRED NYANGARESI

On November 8, Gikomba Market suffered another fire, the latest in a string of incidents that have caused vast amounts of damage and hardship to the market’s traders and their businesses, along with the loss of millions of shillings worth of products.

Just the week before the Gikomba fire, a court order gave the Nairobi Metropolitan Services (NMS) the green light to evict thousands of traders who were required to make way for the expansion of the Pumwani Majengo Health Centre.

Given the circumstances, it is unsurprising that many are pointing out the likelihood of arson as the cause of the fires, and the probable involvement of clandestine groups using thugs to torch these businesses in a land-grabbing ploy.

I take great pride in the fact that this city is home to East Africa’s largest second-hand clothing market.

Kenya has a strong tradition of entrepreneurialism and many young Kenyans are now embracing the “hustler” label.

Nowhere is this better exhibited than among mitumba traders and market sellers, who will start and nurture a business often with very little startup capital demonstrating their business acumen and entrepreneurial spirit.

It is a part of our culture and social fabric that deserves more respect.

There are also a myriad of economic reasons why these traders and their businesses are important to Kenya and deserve greater protection.

Despite the informality of the SMEs found in Gikomba, these businesses have an important multiplier effect supporting several other industries including logistics, clearing and forwarding, insurance, and security among others.

Furthermore, figures produced by the Institute of Economic Affairs (IEA Kenya) show that the mitumba sector contributes a noteworthy amount to the economy in taxes, with Sh12 billion paid in 2019.

The IEA has also highlighted that a large portion of Kenyan consumers depends on the availability of second-hand clothes, with 42 per cent of expenditure on clothing going towards second-hand items.

These facts underline the economic and social importance of these livelihoods.

And, as we have seen, the lack of intervention by the government has cost these market dealers dearly.

Previous infernos have been followed by promises to increase security by erecting a boundary wall and floodlights, installing cameras, along improving access to roads into Gikomba which will allow firefighters to arrive on the scene earlier.

The time is now for this government to deliver on its promises.

We as, the Mitumba Consortium Association of Kenya (MCAK) are calling for a string of measures to protect market sellers and working to unite the informal trade in the face of these threats.

MCAK is calling for the adoption of policy measures to facilitate the formalisation of informal trades such as a mitumba in Nairobi County, whilst Gikomba should also be declared and gazetted as a formal open-air market to protect it as a public space.

MCAK is also calling for the immediate release of findings of the public investigation into the fires, ordered by the President in 2017.

I have no doubt that the government recognises the plight of these traders and the vital contributions their businesses make to Kenya’s economy and society.

However, It is imperative now that the traders are provided with the proper political and legal protection that will allow them to continue doing business.

Teresia Njenga is the  Chairperson, Mitumba Association of Kenya (MCAK)