•We need to adopt anticipatory and preventive risk management as opposed to a reactive approach.

•The affected communities can be trained and encouraged to diversify their economic activities which will reduce overreliance on one source of income. 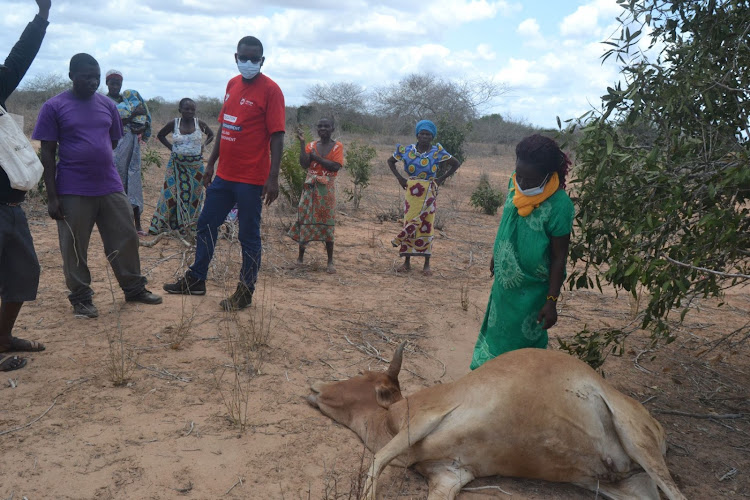 A cattle carcass which died due to drought in Baricho area within Magarini constituency in Kilifi county.
Image: ALPHONCE GARI

Counties in the arid and semi-arid regions are currently experiencing severe drought.

According to the National Drought Management Authority drought July bulletin, the drought has affected 12 counties. And the situation is projected to spill over to 2022.

Inadequate short and long rains from October to December last year and from March to May have been cited as the main cause.

This prompted President Kenyatta on September 8 to declare the drought a national disaster.

Kenya’s vulnerability to drought can be attributed to overdependence on rain-fed agriculture, this being the main economic activity in the country.

This year, the drought is reported to have adversely affected about two million lives in the 12 counties.

This is not the first time Kenya has been hit by a severe drought.

Recently, the treasury announced a release of Sh2 billion towards alleviating suffering to the affected communities in the drought-hit counties

Over the years, the country has experienced human suffering as a result of inadequate rains.

Drought is a disaster that leaves in its wake extreme human suffering.

Most of the residents in arid and semi-arid areas practise agro-pastoralism and pastoralism, hence heavily depend on livestock for livelihood.

Lack of or inadequate rainfall leads to reduced pasture and reduced animal production.

This equals a reduction in milk and meat production and the death of the animals.

It spells near doom for the communities as it eventually gravitates to malnutrition and death.

Recently, the treasury announced a release of Sh2 billion towards alleviating suffering to the affected communities in the drought-hit counties.

NDMA indicates that families in the affected counties have to trek up to 30 kilometres to access water.

This includes areas like; some parts of Marsabit, Lodwar, Isiolo, and Garissa among others.

With reduced pasture and inadequate water, many of the pastoralist communities are forced to move to areas where the resources can easily be accessed.

We need to adopt anticipatory and preventive risk management as opposed to a reactive approach.

The scourge has been with us for a long time. This means we need to have learned something from the occurrence.

This can be achieved through constant updates by the meteorological department. It will help foresee any likely extreme changes in weather patterns and prepare well in advance.

In addition, it should implement measures to reduce the effects of drought.

Other measures include sensitising communities to the importance of conserving the environment.

The affected communities can be trained and encouraged to diversify their economic activities to reduce over-reliance on one source of income.

The government can also help the communities in the Asal areas by drilling boreholes and building dams and water pans.

How a farmer solved problem of livestock dying in drought
by ADAGI PAUL
Star Blogs
12 October 2021 - 22:00