The state needs to fast-track the national strategy on parastatal reforms.

• Given the current poor financial state and performance of a majority of them, the State needs to fast-track the national strategy on parastatal reforms.

• In a recent financial evaluation conducted by the National Treasury of 18 key state corporations, only three were declared profitable. 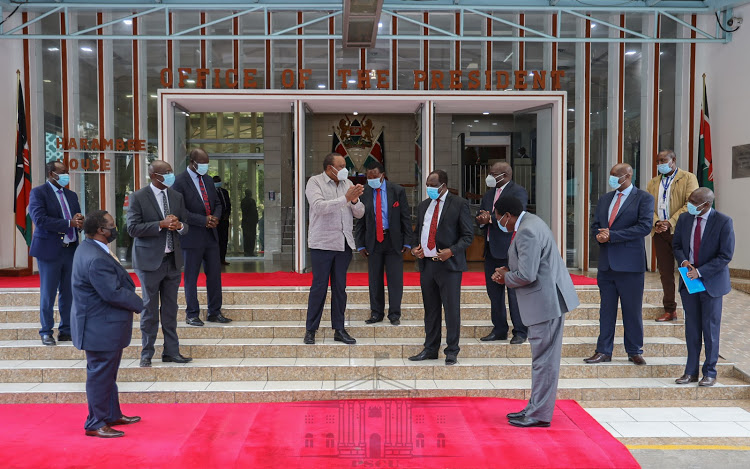 President Uhuru Kenyatta at Harambee House with Western Kenya leaders during a past meeting.
Image: PSCU

State corporations, or parastatals, have contributed immensely to Kenya’s economic and social development.

But given the current poor financial state and performance of a majority of them, the State needs to fast-track the national strategy on parastatal reforms.

There are currently about 260 SOEs in Kenya cutting across the major sectors of the economy.

As a matter of fact, the majority are struggling with financial and governance issues requiring urgent action.

This is because they account for a sizeable share of the national Budget in the form of grants, subsidies, loans and debt guarantees.

The seriousness of the problem is highlighted in a recent financial evaluation conducted by the National Treasury of 18 key state corporations as part of the national strategy to improve the governance and financial performance of state corporations.

Of the 18 entities evaluated, only three were declared profitable.

The rest were either unprofitable, lossmaking or barely able to recover their costs.

This is a reliable indicator of the problems bedevilling the state-owned entities.

The shocker is, the 18 state corporations in question need a whopping Sh382 billion over the next five years to meet their liquidity needs.

That is roughly Sh75 billion per annum or more than the cash the government plans to spend on Universal Health Coverage and purchasing Covid-19 vaccines in the current financial year.

If 18 parastatals require Sh75 billion per year from the State, we can safely assume the over 280 agencies need roughly 15 times that amount per annum to remain sustainable.

Of course, one would expect that a good chunk of this cash would be invested in the more viable government-owned entities to enhance their ability to deliver much-needed public services and contribute to Vision 2030 among other national development objectives.

But truth is, many of the state-owned agencies are in a precarious financial standing, and would barely survive without State support.

With Covid-19 having worsened their already poor financial performance, plunging them deeper into debt, the National Treasury is on the right track in assessing their liquidity requirements so as to come up with the optimal measures.

However, given the deep-rooted malaise in many of the SOEs, restructuring the 260 agencies to purge them of the corruption, inefficiency and poor governance that continue to undermine their performance is no mean feat.

But if well-handled, this will not only save the national government money for other priority needs like health and education but also benefit counties.

For instance, research conducted in 2015 by the International Budget Partnership (IBP) warned that state corporations in Kenya will remain a major drain on the economy unless urgent measures are taken to among other things, devolve parastatals whose functions overlap with those of counties.

This, IBP argued, would free about Sh78 billion each year from the budget for allocation to the counties to fund development.

Considering the division of revenue has been a major bone of contention between the national government and the devolved units, parastatal reforms should be viewed as one way of breaking the perennial stalemate first, by releasing much-needed funds, and second, aligning the process with the constitutional reality of devolution.

Incidentally, the Building Bridges Initiative (BBI) proposes that parastatals carrying out county functions should either be wound up or restructured.

This would help avoid duplication of roles with the counties and where feasible, align the SOEs fully with devolution to improve service delivery at the grassroots.

Still, on the ongoing evaluation of SOEs by the National Treasury, this will need to go beyond merely exploring ways of improving the liquidity position of the under-performing entities.

For example, there is a need to identify those that have strong commercial potential and accord them more autonomy to pursue their objectives.

This includes strengthening institutional governance structures to make them more accountable while curbing the wanton culture where parastatals are treated as ‘cash cows’ by corrupt officials for siphoning public funds through dubious ventures.

In other words, the solution is not necessarily in pouring money into the troubled institutions but developing innovative ways of enhancing revenue and sealing wastage of resources.

The significant budgetary saving that would be achieved through the process would translate into massive economic benefits, including the creation of sustainable public enterprises that are independent of State support but far more efficient and accountable.

The National Treasury should therefore expedite the process of turning around the earmarked SOEs so that taxpayers, who have invested billions of shillings in these entities over the years, can finally get real value for money while transforming Kenya’s economy to the next level.