They shout and promise free goods to citizens, but are actually in pursuit of primitive capital.

•Our leaders and by extension we the citizens have failed not only to allow devolution take root in the country, but refused to nurture any meaningful philosophy and direction that is required to actualize the devolution dream.

•Its once more the cut and paste approach that characterize our political parties manifesto development process; which then denies the citizen the opportunity to choose from any variety. 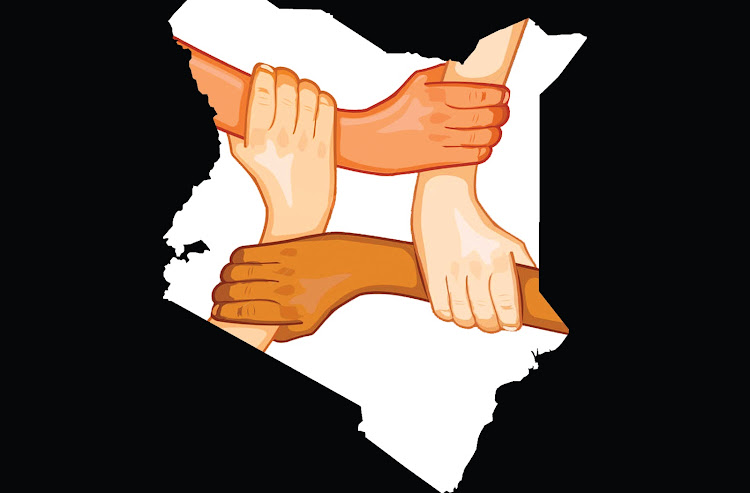 The ensuing sloganeering on which economic model is suitable to taking Kenya from the trenches either through the “bottom up” or “trickle down” models while coming at the wrong time in terms of relating to the 2022 general election, is relevant because it has brought to fore the failure to appreciate devolution in the country.

Our leaders and by extension we the citizens have failed not only to allow devolution take root in the country, but refused to nurture any meaningful philosophy and direction that is required to actualize the devolution dream. Its once more the cut and paste approach that characterize our political parties manifesto development process; which then denies the citizen the opportunity to choose from any variety. Most of political players have a common background, largely capitalists who disguise themselves as liberals or social democrats.

They shout and promise free goods to citizens, but are actually in pursuit of primitive capital, which in addition to siphoning out of the country, bring the accumulated wealth outside the formal government system to invest in parallel philanthropic activities through donations and buying of patronage to provide the same thing required to be provided by the government legitimately.

They are government leaders but continue to run private activities to rival government in service delivery, but in this case through privatization or commercialization of things promised and provided for in the constitution. Because of that convulsion of approach and lack of guiding philosophy, its difficulty for them to appreciate that a people centered development approach they seem to suggest is currently provided for in the constitution. Other parties of the laws might need change as always but the firm foundation set for decentralization are yet to be fully tested.

The Constitution of Kenya 2010, provides for devolved government expected to promote social and economic development and the provision of proximate, easily accessible services throughout Kenya; ensure equitable sharing of national and local resources throughout Kenya; facilitate the decentralization of State organs, their functions and services, from the capital of Kenya.

You notice that before the current constitution, there were many attempts towards decentralizing governance and service delivery in Kenya without success. Corruption killed it. The intention of decentralization in Kenya has been to ensure that the national Government (the Kenya state) authorship of development process and planning is based on local inputs including people as a means of improving socio-economic well-being of local communities. The focus is on economic and social development of the local people based on exploitation of local resources while at the same time ensuring national unity and sharing of our diversity as one nation.

Attempts at decentralization started at independence, through majimbo, which granted significant recognition and responsibility to the regions. The system granted power to the Local Authorities to collect taxes and the responsibility for the maintenance of schools, health facilities and minor roads.

Through “Sessional paper No. 10 of 1965 on African socialism and its application in planning” the government established the principle of state direction of development process and decentralization of planning based on local inputs as a means of improving socio-economic well being of the rural community. The Sessional Paper No. 4 of 1975 on ‘Economic Prospects and Policies’  laid emphasis on Government’s commitment to rural development’. In furtherance of this thinking, since late 1970s and early 1980s, the 6 Regional Development Authorities (RDAs) that were established were given a common mandate to plan and coordinate the implementation of regional development activities. This is the thinking around the creation of the equalization fund in the current constitution that has been frustrated.

Remember the District Focus for Rural Development Strategy (DFRDS) developed in 1983 largely associated with the late Simeon Nyachae that made the district the epicentre of all development interventions emphasized economic and social development via exploitation of local resources.

Other decentralization interventions including the Local Authorities Transfer Fund (LATF) Act of 1999 only provided for the disbursement of funds to Local Authorities to supplement the financing of the services and facilities they are required to provide under the Local Government Act.

The Constituency Development Fund (CDF) through the CDF Act aimed at controlling imbalances in regional development especially focusing on poverty reduction at constituency levels. The Poverty Reduction and Growth Facility (PRGF) that was implemented in 2000 in tandem with the Poverty Reduction Strategy Paper (PRSP) followed by the Economic Recovery Strategy for Wealth and Employment Creation stressed the need to accelerate local government reform process in order to further improve local service delivery, governance and poverty alleviation and not destroying or allowing county governments to compete with the national government on some issues including security.

The structures for people centered development through national and county government structures are present, and are the legitimate ways of getting the country out of the current mess. Parallel and informal approaches to economic development of the country might be too costly even as they promise to provide quick solutions to the challenges the country is deeply entrenched into.