JOSEPH NDONGA: Is Uhuru taking Nasa leaders for a ride?

For now, it seems that Raila is not ready to support any of the Nasa co-principals

•The DP is capitalizing on the confusion and jostling to catch Uhuru’s eye to endear him to the masses.

•A time has come for anti-Ruto forces to heed Governor Charity Ngilu’s call to unite and field a single candidate to face Ruto at the ballot. 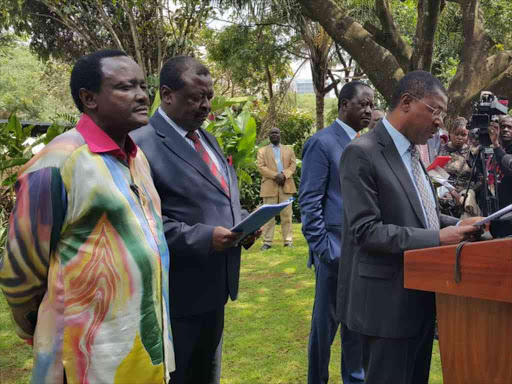 A few days ago, Makueni Senator Mutula Kilonzo claimed that President Uhuru Kenyatta was ‘enjoying’ the Nasa leaders by giving hope to each that he would endorse him.

This was working in favour of Deputy President William Ruto who had already hit the ground running.

The DP is capitalising on the confusion and jostling to catch Uhuru’s eye to endear him to the masses.

He spoke after three Nasa principals and Kanu chairman Gideon Moi held a meeting in Nairobi and passed a resolution ‘to drive the last nail on Nasa’s coffin’.

ODM leader Raila Odinga, who is viewed as the face of Nasa, did not attend and it seemed the main agenda was to ‘divorce’ him.

"We have a new house called One Kenya Alliance. We invite like-minded parties to join our outfit on the condition that they toe our line".

However, one thing was clear. They still considered Raila as a force to reckon with but this time wanted him to play the role of a kingmaker.

Reason? The trio had previously backed his candidature in three consecutive presidential elections. The support would be hinged on coalition pacts which Raila later disowned.

But when you listen to the drafters, you get a different picture. The agreements were not binding because Raila did not win the election.

For now, it seems that Raila is not ready to support any of the Nasa co-principals.

Though he has not openly thrown the hat in the ring, he has been capitalizing on the ‘Handshake’ between him and the President and one of its key planks, the BBI process, to elevate himself as the best candidate.

Though he reiterates that he is waiting for the Court of Appeal to render the judgment on the BBI case, the other day he seemed to change the tack when he stated even if those opposed to BBI fronted constitution of Kenya Amendment Bill 2020 will have their way, this will not be the end of the road.

We shall look for other ways of ensuring the changes are realized because they are good for the country.

If Raila insists on being on the ballot and One Kenya Alliance also fronts a candidate, will this narrow it down into a three-horse race? When seeking an answer to this question the public opinion is always divided.

Some believe none of them will garner the requisite threshold of 50+1 per cent of votes cast nationally and hence there will be no winner in the first round.

In the run-off, either Raila or Mudavadi will face it off with Ruto. One of the first two chances of winning will be very higher.

Those opposed to Ruto’s presidency fears that a divided opposition could give DP an undue advantage.

While casting OKA and ODM as confused outfits led by tribal and regional kingpins, he could create ‘a a euphoric wave’ around the ‘hustler nation’ and ‘bottom-up economic model’.

A time has come for anti-Ruto forces to heed Governor Charity Ngilu’s call to unite and field a single candidate to face Ruto at the ballot.

In the 1992 and 1997 general elections, they lost because of the greed for power and pursuing their personal and selfish political interests at the expense of the common good of the Kenyan people. Each contested the poll on a ticket of their respective parties.

But in 2002 they formed the Narc coalition which easily toppled Moi’s Kanu government and catapulted Mwai Kibaki to the helm of power.

Back to Mutula’s remarks, his claims did not hold any water. Since his re-election in 2017, Uhuru has never come out openly to support any candidate.

Instead, he has been calling upon leaders to shun the early and premature succession politics and rallied them behind his agenda of the ‘Big Four’, building a united and cohesive country and fight against corruption.

His call on Nasa, Kanu and all other leaders to unite ahead of 2022 polls resonate well.

I am sure when the time comes Uhuru would support a candidate who believed in his legacy projects.