• In Africa, the most effective interventions that reduce the risk of HIV infection among adolescent girls are the ones that keep them in school.

• It is the right time for the government to allocate more funds to feminism programs so that young girls can make informed decisions regarding their health. 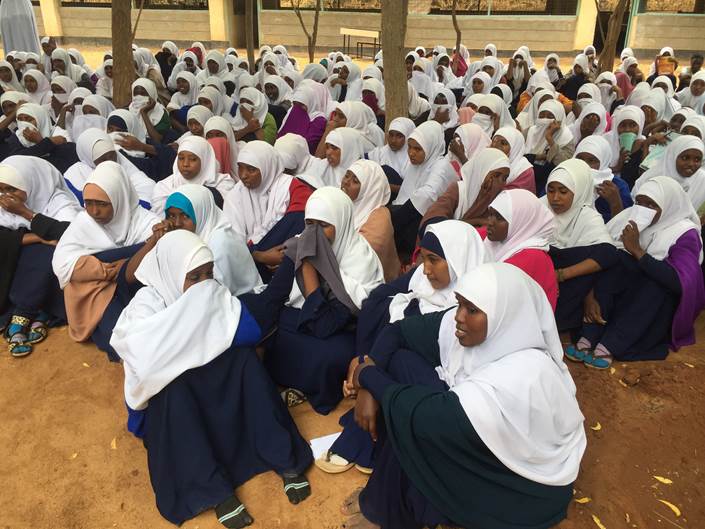 Girls listen to teachings in one of the Dadaab camps
Image: COURTESY

Education for girls increases their thinking capacity and makes them better citizens.

It also allows them to gain better knowledge about sexual and reproductive health, including about HIV.

It lowers exposure to intimate partner violence and increases their chances of becoming financially secure and independent.

In Africa, the most effective interventions that reduce the risk of HIV infection among adolescent girls are the ones that keep them in school.

These include making education free for girls, supporting orphans and other vulnerable children to stay in school, and conditional cash transfers that help them to cater for their basic needs.

There is clear evidence that comprehensive sexuality education that explicitly focuses on gender rights and gender power dynamics is five times more effective than CSE programmes that do not, particularly in reducing unwanted pregnancies, new HIV infections and other sexually transmitted infections.

Despite this, a major gap remains between global and regional policies and the actual implementation of comprehensive sexuality education on the ground.

Gender-responsive and life-skills-based HIV and sexuality education is only covered in the national curriculum by 15 per cent of the 78 countries reported in the UNESCO’s 2016 Global Education Monitoring Report.

Kenya is one of the countries to have implemented a gender-responsive CSE programme.

This is helping adolescents and young people in Kenya enjoy better sexual and reproductive health and have better health outcomes overall.

In 2014, UN Women commissioned a global review of HIV treatment access for women, led by women living with HIV.

Known as the Global Reference Group, this is the first-ever peer-led global study of treatment access for women living with HIV on this scale.

Participants in the GRG reside in 11 different countries and come from a diverse range of backgrounds.

They have led the design and review of the programme, involved in setting the parameters of the GRG’s literature review and identified the topics for focus group discussions, one-to-one interviews and an online survey.

Some members are also involved in country case studies that investigate the issues and concerns that the GRG raises.

It found 89 per cent of respondents feared or had experienced gender-based violence, 56.7 per cent had had an unplanned pregnancy, 72.3 per cent had received advice on the safe conception and 58.8 per cent had suffered poor mental health after discovering their HIV-positive status.

This is clear evidence that young women face a lot, especially if they lack basic knowledge.

It is clear that health care for women is more expensive than it is for men, in fact during their reproductive years, women spend 68 per cent more on health care than men do.

To curb this barrier which leads to a health burden, it is the right time civil society and young people themselves consider it a top priority to accelerate HIV prevention programming among adolescent girls and young women in line with respecting, protecting and fulfilling their rights and promoting gender equality.

Preventing new infections among adolescent girls and young women requires a combination of approaches that also reach out to men and adolescent boys.

It is the right time for the government to allocate more funds to feminism programs so that young girls can make informed decisions regarding their health.