Port is one of the flagship infrastructure projects identified in Kenya Vision 2030.

• Lamu Port has been equipped to handle clearance of cargo, through the installation of the Integrated Customs Management System (iCMS) and Simba Systems that will be used for 24-hour clearance, ensuring efficiency in cargo handling.

• The President is pushing for the speedy and detailed completion of this project since it will be a game-changer in East Africa Community’s maritime business, as well as a mega trade connection within the EAC. 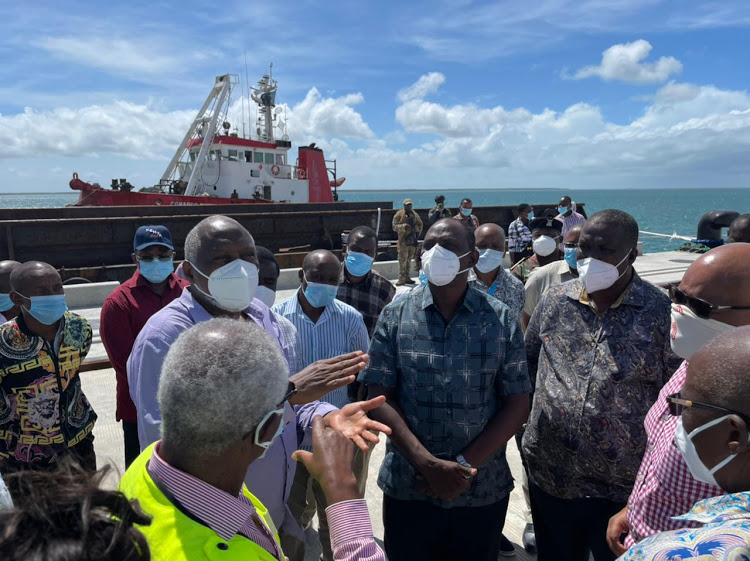 Treasury CS Ukur Yatani during the inspection tour on Thursday on the ongoing construction works at the Port of Lamu. He was accompanied by Petroleum and Mining CS John Munyes.
Image: TWITTER/ NATIONAL TREASURY AND PLANNING

The $25 Billion, Lamu Port-South Sudan-Ethiopia-Transport (Lapsset) Corridor project, has morphed into a powerful infrastructure project, with multi-agency operations, working to ensure the operationalization of the Lamu Port by 20th May 2021.

The government through The Kenya Revenue Authority (KRA), The Kenya Ports Authority (KPA) alongside the Treasury and National Planning Cabinet Secretary Amb. Ukur Yatani toured the Lamu Port last week and affirmed that the first cargo ship was expected to dock at berth one of the Port by 20th May 2021.

Through the Multi-Agency framework that has been beneficial for the completion of the majority of government projects, KRA conducted a dry run for cargo clearance in preparation for Maersk Shipping Company.

This is expected to be the first ship to dock at the Lamu Port.

The KRA Marine and Enforcement Unit has made preparations for the gigantic ship, owned by the Denmark-based Maersk Logistic Shipping Line, to dock at the Port, before proceeding to the Port of Salalah in Oman.

Lamu Port has been equipped to handle clearance of cargo, through the installation of the Integrated Customs Management System (iCMS) and Simba Systems that will be used for 24-hour clearance, ensuring efficiency in cargo handling.

Further, KRA has installed two network back-ups other than the fibre optic cable that is currently in use at the Port; the network will ensure seamless clearance of cargo, without connectivity hitches.

In the spirit of collaborations to promote work efficiency, KRA has aligned its incentives to those offered by KPA, hence cargo clearance will be paperless exclusively handled through iCMS.

To attract potential users, KRA has removed the transhipment fee and waivered the 30-day requirement for evacuation of transit cargo, for all cargo cleared through Lamu Port.

Further, KRA Commissioner for Customs has aligned with the KPA free storage promotional window by extending the entry period for cargo, to go beyond 21 days.

The Port agencies are very ready for commissioning and KPA has begun moving machinery to ensure that the Port is fully operational by June 2021.

Consignments of equipment such as low load trailers, extension cargo handlers, trailers and other cargo handling equipment have been put in place for efficiency in cargo operations.

More equipment is expected to be procured in the 2021/2022 fiscal year as the Port agencies work towards high efficiency at the Port of Lamu.

President Uhuru Kenyatta is keen on the entire LAPSSET project, hence the order to ensure that Lamu Port is operationalized before the end of the 2020/21 financial year, while all infrastructure projects scheduled for completion are completed by August, despite the delays caused by Covid-19 pandemic.

The Lamu Port is one of the flagship infrastructure projects identified by the Government in Kenya Vision 2030.

It is part of the mega Lapsset project and links with the Garissa, Isiolo, Maralal, Lodwar and Lokichogio route, branching at Isiolo - Moyale near Ethiopia border and proceeding to the Southern Sudan border.

The President is pushing for the speedy and detailed completion of this project since it will be a game-changer in East Africa Community’s maritime business, as well as a mega trade connection within the EAC.

Apart from creating direct employment for the local community, it is expected to lead to the realization of job creations especially indirect jobs in fisheries, logistics, transport and trade.

The 32 Berth Lamu Port alone will accommodate larger cargo ships which will also improve ship turnaround time because of its size.

Security along the Lapsset corridor will be enhanced by increased developments; moreover, KRA and KPA are alive to the fact that international criminal rings may target the Port for illicit trade, a mobile scanner has been deployed and a K9 force put in place to deter crime. Both human and technological resources have been deployed as part of KRA’s risk management strategies to deter the flow of illicit trade.

Kenyans at large are called upon to exercise patriotism by supporting the realization of the Lapsset project, especially now that implementation is underway and trade activities have kicked off.

The President is optimistic that traders will benefit from the project, because of the reduction in the distance from Lamu to Nadapal on the Kenya-South Sudan border; hence fewer transport costs to transporters plying the route.

The construction of the 1,394km highway from Lamu-Garissa-Isiolo-Nadapal and the 1,178km route from Lamu to Moyale, through Garissa and Isiolo, will greatly and positively impact the cost of doing business. Since these routes link Kenya to South Sudan and Ethiopia, trade activities are expected to increase along the corridor.