Kenya Power, It's unethical to hang on to what you're unable to deliver

We buy the power and if you're unable, lets us buy from available alternatives.

• We have players in the solar power sub-sector that have invested in the region and the country.

• The activities of the corporate sector have a major direct or indirect, positive and negative impact on human rights. 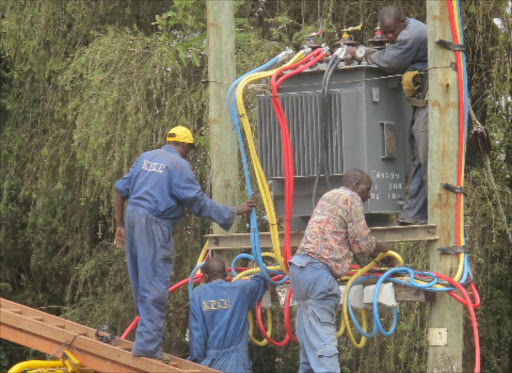 The management of Kenya Power has killed my area and is turning our youth into crime, simply because of denying them power for the last over three months.

This is because of inefficiency and greed thus refused to allow us to get power from alternative sources.

The economic and social disruption you caused because of the lack of power in our village is unforgivable.

We have followed up on the matter including your online platforms and management in Busia without success.

You are simply non-responsive and not bothered at all.

We buy the power and if you are unable, lets us buy from the available alternatives.

It's wrong for you to deny us both ways to get power. Please don’t transfer your problems to us!

KPLC has joined that group of business corporates that don’t respect the human rights of host communities and treat customers with a lot of contempt.

I am not sure if the company has subscribed to the United Nations efforts, spearheaded by the UN Global Compact launched in 1999.

The UN Global Compact is a social contract in which companies are asked to make an active commitment in their own activities and those of their business partners to live up to the nine principles on the Universal Declaration of Human Rights (UDHR), on the core conventions of the International Labour Organisation (ILO) and on Agenda 21 from the Earth Summit in Rio de Janeiro Global Compact.

Under the last mile project, our village, Rudacho in Buisjo sub-location got connected to power, and with a secondary and primary school, shopping centre among others, people went into business that depends on power; shops, saloons, hairdressing, hotels, cybercafés and related small enterprises.

Among the business, some people took loans from financial institutions or loan sharks, and life in the area was booming.

The youth, hitherto idle and engaging in lake piracy in Lake Victoria and related crime now were doing some serious income-generating activities, until Kenya Power decided, these guys must be stopped.

It is so bad, a number of women who had taken loans and defaulted are running away from the village to seek domestic work in towns and hide from the financial institutions and in the process, a lot of families are breaking up.

For nearly three months, a faulty transformer and negligence have turned this area into a dark valley; people have defaulted on their loans, closed businesses and are back to koroboi and have to travel to far places to watch news and football.

Granted that KPLC is unable to deliver power, and I am sure they don’t miss the money, why they can't let my village go is irritating and a violation of human rights.

Just in the next villages including Muhondo and Bumayenga, a company producing and distributing solar power Kudura, has lit up the area including street lights, home electricity among others for pay; and why KPLC cannot allow us or Kudura to serve our area does not make sense.

This is business, and we buy the power, if you cannot supply the power, ship out and allow us to get it from an alternative source.

My village will be more than happy if we are allowed to access the solar energy being provided by Kudura, which seems efficient and available than hang onto a power supplier who seems content with people being without power.

By the way, solar power is even more reliable and healthy especially when KPLC is ignoring us.

We have players in the solar power sub-sector that have invested in the region and the country.

For example, Solibrium has recruited nearly 200 members through the women group movement, who are aggressively leading in the selling of solar products within Kakamega, Busia, Bungoma, Homa Bay, Taita Taveta and Kilifi counties in Kenya.

One Acre Fund, a not-for-profit social enterprise supporting small landowners across Africa, provides extended services like solar lamps, phone chargers among others to farmers they are working with on food security.

Farmers are also using solar irrigation systems as a way of dealing with unpredictable seasons brought about by climate in Kenya.

The Government Master Plan for the energy sector notes that given its position on the Equator- (4.5° South and 5° North), Kenya is endowed with very high solar resources, among the highest 10 of Sub-Saharan African countries.

Given the challenges with conventional energy sources, and poverty levels in Kenya, solar has a high potential, and the government through the Energy regulatory framework is working to ensure the tapping into this resource.

The activities of the corporate sector have a major direct or indirect, positive and negative impact on human rights.

They are expected to put in place mechanisms and initiatives aimed at mitigating these effects as we push for accountability.

The business community needs to be alive to the real and perceived harmful effects of their operations on society if they are to avoid the cost price of community rejection and industrial actions.

it is imperative that companies respect the human rights of their customers, failure to which will subject them to rejection by, communities, consumers, civil society and human rights crusaders.