Samia Suluhu a fresh breath of air to EAC trade

Among the deals closed during the tour included the construction of a new pipeline between the pair of countries.

•The isolation nevertheless became more profound following the advent of the Covid-19 pandemic across the region in March 2020.

•While the world and its neighbours implement measures to curb the spread of the deadly virus, Tanzania chose to walk it alone, picking up virus denial and secrecy- in a sense ignoring the existence of the pandemic. 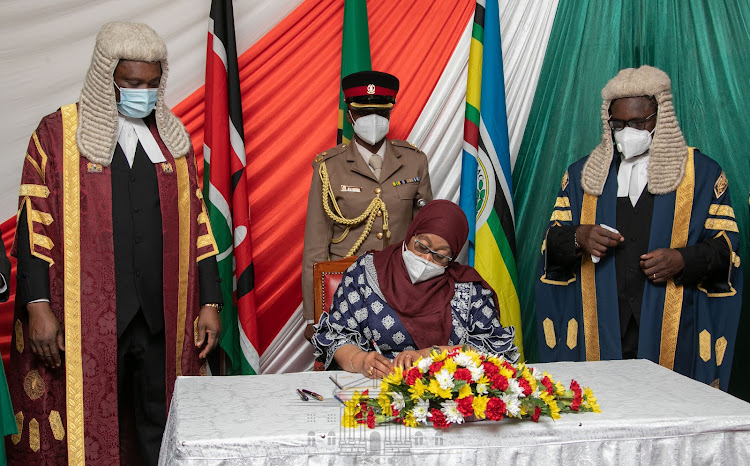 Tanzania President Samia Suluhu when she arrived at Parliament Buildings on May 5, 2021. She is flanked by speakers from both Houses of Parliament Justin Muturi (National Assembly) and Ken Lusaka (Senate).
Image: PSCU

Her meteoric rise to the helm of Tanzania leadership may have come on the backdrop of the unprecedented demise of her predecessor John Pombe Magufuli. Many sceptics further expected a look warm transition to the new regime with likely maintenance of the status quo. Tanzania’s new President Samia Suluhu Hassan has however gone against the grain of pessimism as she steers the country into a new unknown.

Prior to her move to power, Tanzania was slowly moving to island status, isolated from the rest of the globe. Regionally, Tanzania was also collapsing on itself with the previous regime cutting off cordial ties with its closest neighbours.

The isolation nevertheless became more profound following the advent of the Covid-19 pandemic across the region in March 2020.

While the world and its neighbours implement measures to curb the spread of the deadly virus, Tanzania chose to walk it alone, picking up virus denial and secrecy- in a sense ignoring the existence of the pandemic.

To date, Tanzania is yet to update its Covid-19 database nearly one year since an abrupt stop to daily reporting. Nevertheless, the tide is changing with President Suluhu choosing to confront reality over hiding her head in the sand.

For instance, immediately after taking over power, Suluhu has been quick to challenge the country’s Covid-19 denial. In her own words, Tanzania can no longer wish the virus away.

In just under a month since being sworn in, Suluhu formed a committee of experts to advise her on the status of Covid-19 in the country and necessary steps to take to keep its citizens safe.

In the next few weeks, the committee is expected to finalize its review and prescribe new measures which could see Tanzanians don on masks just like their peers across East Africa.

Already, President Suluhu has been seen in public donning a mask, a rare sight with her predecessor who occasionally taunted the effectiveness and use of the face coverings in his public addresses.

Diplomatic Suluhu’s maiden foreign trip took her to a one day trip to Uganda. Here, she held discussions with one of the region’s key figures in President Yoweri Museveni.

Among the deals closed during the tour included the construction of a new pipeline between the pair of countries.

Beyond the pomp and colour surrounding State visits, President Suluhu has been out to assure Tanzania’s reliability and dependability among its neighbours.

Her visit to Kenya this week has echoed the very principles as Tanzania moves forward from years of cold, frosty and socially distanced ties with peers especially Kenya.

In her public address at State House, the National Assembly and at a high-level business summit, Suluhu was quick to admit to Tanzania’s inequities in dragging down regional harmony.

From bearing the responsibility for a trade spat that saw several goods including cattle and chicken from Kenya confiscated by Tanzanian authorities.

At the high-level business summit, for instance, Suluhu summed up the purpose of her visit, providing a cure for barriers inhibiting trade between countries in the region and Tanzania.Just like her name translates to, Suluhu is seeking to be the remedy for years of tense bilateral relations including trade.

On the sidelines of her two-day visit, Kenya and Tanzania also reached significant pacts including the construction of a new gas pipeline between Mombasa and Dar es Salaam at an estimated cost of more than Ksh100 billion and the construction of a highway connecting Malindi-Mombasa-LungaLunga and Bagamoyo.

Taking the cue from her name and messaging, President Suluhu has moved to assure businesses in the region of a conducive operating environment inside the borders of Tanzania.

Among the assurances given include the elimination of non-trade barriers (NTBs), irregular taxation and stringent work permit requirements.

In her speech to the regional business community, President Suluhu emphasized the need for support to the private sector to realize not just enhanced trade ties but also improve economies and livelihoods in the region.

Much thanks to H.E President Suluhu denoted her government is currently undertaking the review of the regulatory environment including reforms targeted at government agencies anchoring trade.

I thank President H.E Uhuru Kenyatta who has extended leadership and support, to join in on the renewed vigour for trade including his pronouncement on the removal of work permits and VISAs to Tanzanian Citizens.

At the same time, President Kenyatta has immediately called for the decongestion of the Kenya-Tanzania border including a complete lift on restriction on maize imports and the harmonization of COVID-tests and clearance for truckers.

For the business community, the renewed vigour for cooperation sets the stage for greater intra-East Africa trade.

The East Africa Business Council (EABC) has previously lamented the low levels of intra-trade which currently sit below 20 per cent of the region’s total trade volume.

The council argues the elimination of the NTBs will be principal to the elevation of intra-trade.

Further, the business community looks forward to the building of regional supply chains, value addition in sectors such as manufacturing and the strengthening of the EAC Secretariat.

With Kenya at the helm of the EAC leadership, a Ugandan President keen on integration and now, a fresh breath of air in Samia Suluhu, EAC bi-lateral relations and are set for a new lift-off, and hopefully this time, to the moon.

The private sector and investors look forward to stronger regional integration and creating innovative new products and services, plus increasing trade between the two nations going forward which would create much needed new employment and entrepreneurship business.