NYS has the capacity to strengthen youth involvement in combating terrorism.

• NYS provides a tried-and-tested institutional mechanism in addressing unemployment and economic marginalization as root causes of violent extremism among youth.

• NYS should also consider increasing the number of recruits from communities or localities considered prone to extremism. 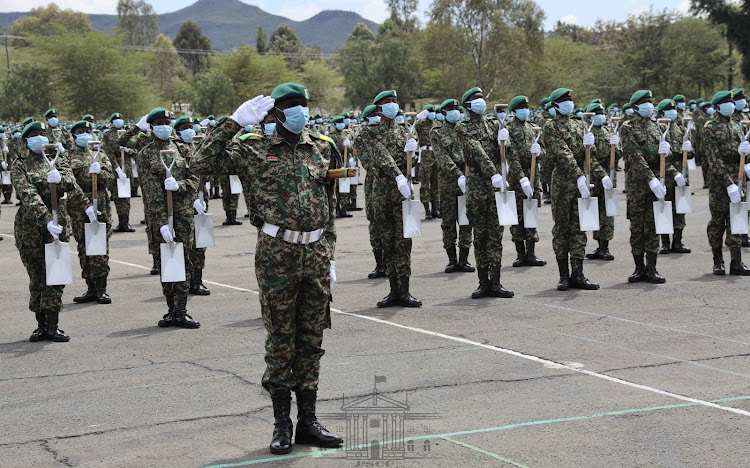 National Youth Service recruits at their training college in Gilgil, Nakuru during their pass-out parade on April 24, 2021.
Image: PSCU

In the last two decades, youth have been at the heart of discourse on peace, security and conflict resolution, thanks to increasing recognition of young people’s vital role in sustaining peace and reducing violence, as opposed to just being treated as just passive “leaders of tomorrow.”

The idea of youth as key drivers of global peace and security was captured in the United Nations Security Council (UNSC) resolution of 2015 (SCR 2250) calling on countries to involve young people in decision-making on issues related to peace, security and conflict management.

The UNSC resolution of 2018 (SCR 2419) also emphasizes the role of youth in the negotiation and implementation of peace agreements.

Considering that violent extremism remains one of the biggest threats to international peace and security, young people cannot continue to be relegated to the periphery as the world struggles to contain the escalating menace of extremism.

Nowhere is youth inclusion in the war on extremism more urgent than in Africa, where violent extremism is costing countries $97 billion (Sh9.7 trillion) annually, according to the UN.

Only last year, the UN Security Council expressed growing concern over the threat posed by the surge in terrorism on the continent, calling for concerted effort in addressing the root causes.

With 60 per cent of the African population being youth, extremists have reportedly intensified their efforts at recruiting young people.

A 2017 study by the United Nations Development Programme (UNDP) pointed at lack of opportunities, marginalization and exclusion as leading factors driving youth to embrace extremist ideologies.

As a non-permanent member of the UN Security Council, and as a country that has borne the brunt of terrorism, Kenya is uniquely positioned to play a leading role in addressing these problems from an African context.

This includes leveraging institutions like the National Youth Service (NYS) in expanding opportunities for youth, and more critically, creating structures for systematic participation of young people in preventing and countering violent extremism (PCVE).

NYS is established under the law as a uniformed and disciplined service.

The National Youth Service Act of 2018 mandates the youth service to cooperate and assist the Kenya Defence Forces, National Police Service and other security agencies in dealing with public emergencies, disasters, wars and insurrections.

The Act thus confers a national security function on the NYS.

As such, NYS has the capacity to act as a platform for strengthening youth involvement and participation in combating terrorism and violent terrorism as major national security threats. This is more of a preventive role.

Moreover, NYS has a strong track record in managing youth programs in vulnerable communities geared to economic and social empowerment.

Most notably, the NYS Community Cohorts Programme launched in 2014 targeting mostly youth in vulnerable communities like Kibera and Mathare low-income settlements in Nairobi.

Reports indicate that by 2017, the programme had benefitted over 230,000 youth in 253 constituencies across the 47 counties in Kenya.

Among the key benefits was providing equal opportunities for men and women to acquire skills and savings to secure employment or start businesses.

Clearly, we do not need to reinvent the wheel as in this case, NYS provides a tried-and-tested institutional mechanism in addressing unemployment and economic marginalization as root causes of violent extremism among youth.

NYS should also partner with counties in training youth.

The Act gives the NYS power to enter into partnerships with public and private bodies to establish, implement, monitor and finance training or employment programmes.

In this regard, the community cohort programme and others should be integrated into the County Action Plans on combating youth radicalization to extremism right from the villages.

Apart from alleviating youth unemployment, such programmes serve to enhance community resilience to violence and other forms of extremism as they directly target the youthful population who are considered the most vulnerable to radicalization.

NYS should also consider increasing the number of recruits from communities or localities considered prone to extremism.

NYS can also directly support community projects geared to improving the lives and livelihoods of our youth.

Members of the service can volunteer or be facilitated to impart vocational skills to idle youth in the villages to enable them to engage in productive activities to earn a livelihood.

Another proposal is to equip NYS recruits/trainees with PCVE skills to transform them into change agents at the community, county and national level, promoting peace and security and actively engaging in conflict resolution.

That way, our youth will be playing their rightful role in sustaining peace and securing the country for future generations.

Mr. Mwachinga is an Advocate of the High Court of Kenya. [email protected]