Diaz: To cancel or not, the dilemma on Olympic games

With just about 10 weeks left, Japan is battling a new surge in Covid infections.

• Japan’s government expanded quasi-emergency measures to regions as the fourth wave of infections spread, casting more doubt on whether the Olympics can be in than 100 days. 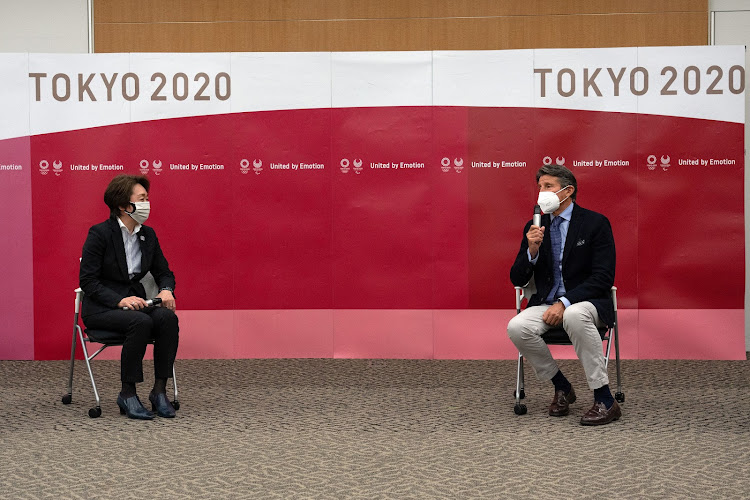 Seiko Hashimoto, president of the Tokyo 2020 Organising Committee (L), listens during a meeting with Sebastian Coe, president of World Athletics, on May 7, 2021 in Tokyo, Japan. Carl Court/Pool via REUTERS

To cancel or let the Olympics continue in July as scheduled?

That has been the heated debate in many quarters over the last many months with people taking sides with reasons – valid or not, depends on how one would weigh in the circumstances around it.

International Olympic Committee (IOC) President Thomas Bach and his attendants are adamant that the Summer Games must go on in Tokyo, Japan despite resistance from various stakeholders and concerns raised over health security.

The World Athletics president, Sebastian Coe admits there are serious concerns and says: “The challenges are big. I don’t believe any Olympic Games has been delivered under more difficult circumstances. These Games have an overlay of complexity that is beyond most comprehension.”

Olympics, like many other sporting events, suffered a huge blow due to the Covid-19 pandemic that swept across the globe – it had to be postponed by a year but still, there are concerns even as the world open up and ease Covid-19 restrictions with businesses rolling back to track.

Organisers are ready but Japan is divided with a huge percentage population against the mega-sporting event going on as it poses a major health danger and it will drag them down due to measures that will be imposed during the event.

Red flag is up

The concerns are not falling on deaf ears and Sebastian Coe said he recognised that many Japanese had concerns.

To confirm the fears, the red flag is up with reports indicating about eight Olympic workers testing positive for Covid-19 during the torch relay last week.

Japan’s government expanded quasi-emergency measures to regions as the fourth wave of infections spread, casting more doubt on whether the Olympics can be in than 100 days though Tokyo 2020 President Seiko Hashimoto remains optimistic thing will work well.

With just about 10 weeks left before the event kick-offs, Japan is battling a new surge in Covid-19 infections.

Stakes are high as cancellation of the event might be costly and a big blow in the sense that it’s late and revenues loss will be huge – a dent that organizers might not recover in whatever way and they know that too well and that’s why a mention of cancellation doesn’t sound good.

With about 15,000 athletes and match officials expected for the event - as well as a large influx of foreign visitors - expected to travel to Japan for the Olympics, Tokyo residents are worried about a further spike in infections and the leaves the government with a huge puzzle to solve – on whether to have the interest of the population or let the games go on.

A look at the past Olympics also reveals that it’s not been a cheap event to host, for instance, London paid 14.6 billion dollars for hosting the Olympics and Paralympics in 2012.

Once a city lands a bid for hosting the Olympics, roads are built, transport systems are enhanced to accommodate the large influx of people.

Housing for the athletes in the Olympic village, as well as at least 40,000 available hotel rooms, and specific facilities for the events, must be created or updated.

With the existing records of the amount spent on hosting the event, it can be noted that Japan will have wasted some good money if they miss hosting this event amid Covid-19 infection fears.

Perhaps a look at what a city may gain in hosting the event will give a picture of what is in store for Tokyo.

There are temporary jobs due to infrastructure improvements that continue benefiting the cities into the future.

Additionally, thousands of sponsors, media, athletes and spectators typically visit a host city for six months before and six months after the Olympics, which brings in additional revenue.

Hosting the Olympics tends to result in severe economic deficiencies for cities. Unless a city already has the existing infrastructure to support the excess people pouring.

Not only Tokyo and the Olympic organizers will be counting losses should the event be cancelled but also athletes who have invested so much in preparations.

The global athletes have been preparing with Africa gunning for Gold in many events too.

My opinion , is this is an event that almost all athletes look up to and it’s always one of the biggest stages to show their might over competitors and lift their nations over other by bagging medals and to cancel at this time, will be a big setback to them – but the question is, should the games be allowed to go on at the expense health issue at hand?

We feel the pandemic has been a disaster and there shouldn’t be a room experiment with what might happen it strike at the Olympics.

It is estimated that about 15,000 athletes and match officials will be part of the event and what if there is an outbreak in camps with a good number of participants infected?

It won’t be an easy task to go about should that happen. Cancellation would be hard but it would also be a cure.

Both the athletes, media stakeholders , sponsors and organizers need to consider health over the need to run the excitement and profits from the Olympics.

We can always reschedule the games in the future.Let us all keep Safe .

Chris Diaz is a Trustee Brand Africa and Business leader