Has the church found its road to Damascus

•  Earlier in January 2021, Rev Sammy Wainaina of All Saints Cathedral dismissed the BBI process as a Trojan horse 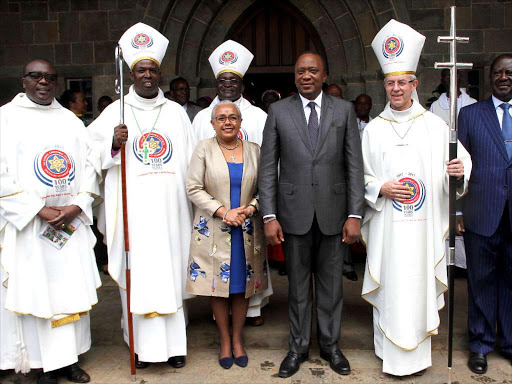 A few days after President Uhuru Kenyatta announced revised Covid-19 containment measures, some Kenyans took to the street to protest against what they described as punishment by the government.

The new guidelines included 8pm-4am curfew and restriction of movement in and out of five counties of Nairobi, Machakos, Kajiado, Kiambu and Nakuru – as a one-zoned area.

Majority of Kenyans viewed these latest measures to combat the virus as inconsequential and punitive. The hashtag #UnlockOurCountry was trending on Twitter for the better part of last week.

But before this, on March 27 — a day after the presidential announcement — bishop Peter Ambuka of PEFA Kahawa West Branch, Nairobi, issued a damning statement directed at President Kenyatta in what was seen as the most daring criticism yet by the church against the government in recent times.

Uhuru banned face-to-face worship in churches in the five counties for 30 days.

Ambuka blasted the political class led by the President for the third wave of coronavirus in the country, thanks to political rallies that were witnessed during and after the second wave.

“Let me put it to you plainly; it is this careless action by you and the politicians that has [sic] made rallies to become the super spreaders of this virus,” Ambuka told the President.

He reminded Uhuru that he, like all elected leaders, is an employee of the people of Kenya and as such his accessibility ought not to be a problem for ordinary Kenyans.

Earlier in January 2021, Rev Sammy Wainaina of All Saints Cathedral dismissed the BBI process – a constitutional amendment project conceived by President Uhuru Kenyatta and former Prime Minister Raila Odinga following the March 9, 2018 handshake– as a Trojan horse that’s designed to serve the political elite at the expense of the people.

“BBI will not solve your problems,” he warned Kenyans. In a strongly worded sermon, the Anglican Provost criticised the dynasties–vs–hustlers’ narrative terming it a potential catalyst for anarchy.

In September 2020, Kenya Conference of Catholic Bishops and Supreme Council of Kenyan Muslims officials dismissed BBI as retrogressive and an unnecessary burden on taxpayers.

These bold statements from clerics come at a time when the church in Kenya has been captured by the state and rendered incapable of speaking its truth. Until recently, the church had been a shadow of its former self.

Having entered into a relationship with the state, it has over the years struggled to find its place as a moral majority. However, on those occasions that it has endeavoured to do so, the price has always been grim, and sometimes even ultimate.

On October 22, 2017, Kenyans woke up to a disturbing video that did rounds on social media. News of the murder of Evans Oduor, a Catholic priest working in Nyando parish, Kisumu, cut through the hearts of most Kenyans like the razor of Ockham. “Why?” “What did the man of God do to deserve this?” Kenyans asked.

In a stinging sermon before his death, Father Oduor had asked President to stop killing Luos who were protesting against electoral injustice after the August 2017 presidential election.

He was discovered near a sugarcane plantation in Chiga market center in Muhoroni, Kisumu before being pronounced dead at Jaramogi Oginga Odinga Teaching and Referral hospital where residents checked him in.

All the same, while it became a victim of state capture under the Moi Presidency – pretty as much under the Jubilee administration – the church enjoys a rich history of active participation in the democratisation of the Kenyan story.

In a journal article titled; Church and State in Kenya, 1986-1992: The Churches’ Involvement in the ‘Game of Change’ (African Affairs, 1997), Galia Sabar Friedman observes that between 1986-92, the church in Kenya generated and sustained public discourse on democracy and change and organised grassroots political activities prior to the first multiparty elections in 1992.

Church leaders who chose to cement the church’s position as a moral majority under a regime that thrived on unbridled bacchanalia of greed, impunity and corruption did so a great personal cost.

For example, Anglican Bishop Alexander Muge died in a mysterious road accident along Kisumu-Busia highway in 1990, at the height of clamour for repeal of Section 2A of the Constitution that had reduced Kenya to a de jure one-party state in 1982.

So, has the church in Kenya found the road to Damascus? Or will the forces that have captured it prove too powerful for its restoration agenda? Only time will tell.