Diaz: A year full of lessons

• Video-telephony software Zoom is perhaps one of the top words summarizing the year 2020 and a mirror to the new normal.

• While extending part of measures to contain the current third wave of infections, President Kenyatta said the pandemic has not exposed our weaknesses but have rather shown our strength. 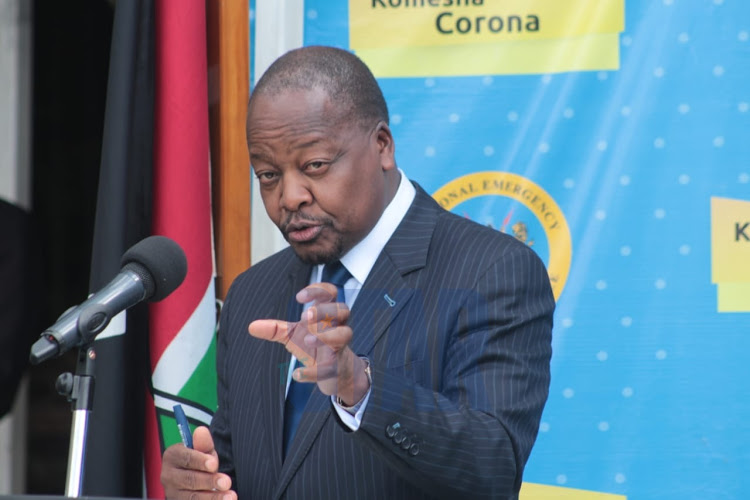 13 March 2020... It was a Friday like any other like it is typical for Kenyans, we were winding down the week getting ready for a blissful weekend as always.

However, the enemy lurking outside our borders had crossed over as we would find out moments after 10 am when the then just installed Health Cabinet Secretary Mutahi Kagwe walked down the steps of Harambee House delivering the heartbreaking news to the public.

What followed in the aftermath of the breaking news was pandemonium.

Tens of Kenyans dashing into stores to stock up on essentials, perhaps taking a page from citizens in overseas countries who had done the same.

The price of key essentials addressing the new emergence such as face masks and alcohol-based hand sanitisers would soar in hours while our own Nairobi Securities Exchange shed nearly Sh120 billion as foreign investor closed on local positions.

In the days that followed the first announcements, the number of infections begun to rise steadily. Most of us were glued to our television sets and radios every afternoon as if confronting reality.

CS Kagwe would in days become a household feature briefing us on the count of new cases and contact tracing statistics.

In a little over a week, the crisis had been laid bare as we were informed of more and diverse cases prompting the government to act tough to manage the runaway unfolding cases.

For only the third time after the 1952 State of Emergency declaration and foiled 1982 coup attempt, Kenyans were now the subject of a dusk to dawn curfew.

Schools were closed indefinitely, another first in living memory, places of worship would also close as did hotels, passenger flights suspended and borders shut.

Employers were encouraged to allow employees to work from home, even sports events were cancelled, and before most people realized it, we were treading a new normal.

As the pandemic continued to weigh heavy on not just health, as fatalities became evident, but also the economy as businesses closed down and jobs got cut, the government instituted measures to purpose a soft-landing for the country.

First, the Central Bank of Kenya (CBK) would use its regulator role of the banking sector to cut transaction fees on all mobile-money transactions not surpassing the Sh1,000 mark as it desired cashless transactions during the pandemic.

Further, the reserve bank required banks to restructure loan payment to customers while it lowered both its base lending rate and its cash-reserve requirement by lenders to anchor cheap financing during the pandemic.

On its part, the National Treasury would on the orders of President Uhuru Kenyatta work out the first stimulus program during the pandemic which affected among other remedies, relief on income taxes.

The pay as you earn (PAYE) rate would for instance come down by five per cent as did the rate of corporation tax.

The rate of value-added tax (VAT) would also come down to 14 from 16 per cent while Kenyans earning Sh24,000 and below were exempted from all taxes.

In doing so, the exchequer skipped Sh65 billion in revenue flows between April and December 2020.

Video-telephony software Zoom is perhaps one of the top words summarizing the year 2020 and a mirror to the new normal.

With offices shut, and just like in any other parts of the world, the 9 to 5 mob quickly resulted in new innovations to keep the workflow going.

Virtual parties and virtual workouts also became a new thing as entertainment joints and gyms remained shut for months following the advent of the pandemic.

Other new terms thrown into our everyday lives include social distancing, quarantine, isolation and sanitizing among many more.

With international borders shut making it virtually impossible to order goods from overseas, Kenya was forced to look inside for solutions as the demand for personal protective equipment (PPEs) shot and the capacity of the health sector was stretched.

In just days, and virtually overnight, Kicotech- a small manufacturer of overalls used in farm production in Kitui County transformed into a full-scale creator of PPE.

The overnight innovativeness has shown Kenya’s ability to cut its high dependency on products it might as well manufacture domestically even after the end of the current crisis.

With lower imports seen across the country, Kenya’s current account deficit narrowed significantly as the balance of trade improved in its favour.

While extending part of measures to contain the current third wave of infections, President Kenyatta said the pandemic has not exposed our weaknesses but have rather shown our strength.

Businesses have weathered the storm on the economy by re-tooling and re-engineering their models to stay afloat.

While measures taken to contain the pandemic hit the economy hard, the economy is still tipped to have grown by 0.6 per cent hinting at strong growth in the fourth quarter of 2020.

President Kenyatta who emphasized the need to choose life over the economy estimates gross domestic product (GDP) shrunk by about Sh560 billion but termed it as a small price to pay for bold decisions by the country.

The Kenyan economy is tipped to rally this year with estimates by the National Treasury and the International Monetary Fund (IMF) tipping growth at 7.1 and 7.6 per cent respectively.

The country should endeavour to keep lessons learnt through the first year of the pandemic to achieve even greater growth in years to come.

Going forward, the number of Covid-19 cases remains a big worry for the world and unless we all consistently follow strict health protocols and take care of the innocent and elderly folks, the future health of our friends, brothers sisters and citizens of the world remains a big concern.

Chris Diaz is the Director EABC and Brand Africa Trustee