Food security and Covid-19: What next for the country?

"Challenges currently experienced in the sector and must be addressed."

• There seems to be fatigue among Kenyans in living under the containment measures, and the military approach to the pandemic.

• It has to be a health approach including budget allocation, actualisation of the health commission, community involvement and ownership of the interventions. 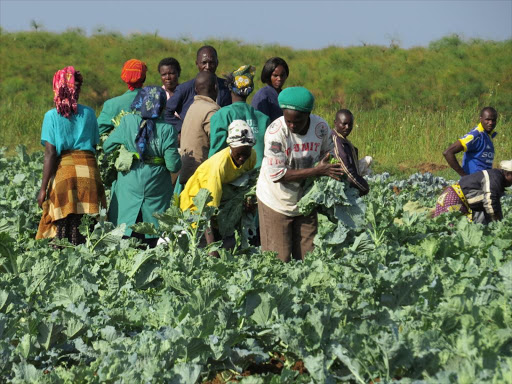 Since the onset of the Covid-19 pandemic, the country's focus has been on the containment of the outbreak, and with nearly all sectors of the country closed, echoes for opening up are increasing daily, seemingly irrespective of the rising positive cases and outcome to the country.

There seems to be fatigue among Kenyans in living under the containment measures, and the military approach to the pandemic inevitably having to give way to a public health approach.

It has to be a health approach including budget allocation, actualisation of the health commission, community involvement and ownership of the interventions and above all, a re-look at the health policies, infrastructure and planning in the country.

With no known credible treatment of the Coronavirus, and the country increasingly moving towards home-based care for the positive cases, food security is now on the radar, role of proper nutrients and diets in the therapy, to a holistic re-look at the agriculture sector.

While ordinarily its harvesting time across the country, many regions of the country experienced poor harvests because among other things flooding and locust invasions and now with inter-country movements slowed down because of Covid-19 containment measures, food prices have remained high in many parts of the country.

How did the Covid-19 containment measures affect agricultural production in general and food security in particular?

Within the larger climate change impact of agricultural production, locust invasion, floods and fake seeds and fertilisers earlier noted and predicted to have a negative impact on food security, and now inter-country food movement slowed down.

What is the situation and likely predictions on the country’s food security?

Note that food security was prioritised in President Uhuru Kenyatta’s Big Four Agenda, followed by the government allocation of several billions to enhance food security and nutrition to all Kenyans by 2022 and to support value addition and raise the manufacturing products to 15% as key interventions.

How has the pandemic affected these plans? The President has written off debts owed by the tea, coffee and sugar industries and farmers as a way to jump-start the sectors.

These among the several interventions that were suggested by stakeholders if food security was going to be achieved; stakeholders had called for enactment of consolidated agricultural reform legal framework that sets out partnership between the national government and county governments.

From what we have witnessed in the health sector with the outbreak of the corona virus and how counties have been struggling to deal with the situation, it will be a miracle if the country has anything in stock for the agriculture sector.

With agriculture being a devolved function and research in the sector abandoned, very little can be achieved as the sector is disjointed and lacks an environment that will allow maximum productivity as demanded by the President.

Among the Big Four Agenda is food security focusing on increasing production, processing, value addition and agribusiness- through focus on agriculture value chain approach on priority crops, livestock and fisheries commodities while at the same time enabling the manufacturing pillar.

In respecting article 43 of the Kenya Constitution that provides that every person has the right to be free from hunger, and to have adequate food of acceptable quality, the Governments intends to focus on transforming current agriculture activities to commercial driven agriculture and agribusiness as the main areas.

The conditions for enabling the country achieve this are ripe in Kenya including glaring political good will to support the Big Four, underutilised agricultural land, availability of local and international markets for the products thus enhanced income for farming communities and favourable weather/climatic conditions in most parts of the country.

Challenges currently experienced in the sector and which must be addressed include frequent droughts in parts of the country, high costs of domestic food production due to high costs of inputs especially fertilisers and farming equipment, rural-urban migration of young energetic population, low purchasing power for large proportions of the population due to high poverty levels, lack of incentives and lack of diversified agricultural activities.

Will the Covid-19 intervention include a section on food support to Kenyans including subsidies to farm inputs, food rations and related support with farm requirements?