Mau Forest is different from the trust lands, there are genuine settlers who bought land lawfully

• Mau Trust land was held in trust on behalf of communities by then Narok County Council for future expansion as the population explodes.

• Sale agreements, titles and transfers were conducted smoothly until 2004 when the government stopped recognising the trust lands. 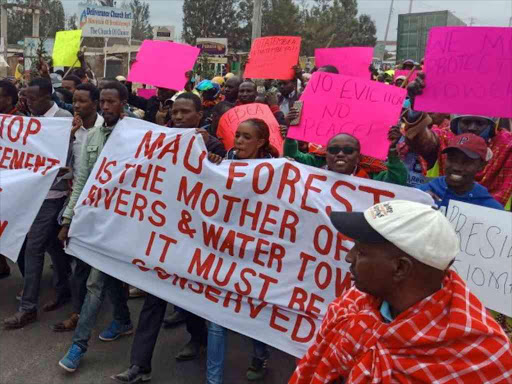 Many Kenyans are confused about the geographical location of Mau Forest and Mau Trust land which are two different places, although in the same area. Mau Trust land was held in trust on behalf of communities by then Narok County Council for future expansion.

Thus, when group ranches applied for an extension of the land, the county council did not have any objection. The ranches were then expanded from the Trust lands, not Mau Forest, hence the confusion. These ranches have been in existence since the 1960s and someone is now waking up from deep slumber to find settlers there who have valid documents.

The Trust lands existed in the colonial era and were marked by latitudes and longitudes. Around 1974, they were adjudicated and titles processed. Since they were large parcels, the original owners subdivided them and sold them to the current settlers. Sale agreements, titles and transfers were conducted smoothly until 2004 when the government suddenly decided not to recognise the trust lands. A lot of politics and misinformation started then and have continued to date.

Those who have encroached on Mau Forest should be evicted to save one of the country’s water towers and prevent damage to the environment. But those within the Mau Trust land with valid documents should be spared. Relevant departments should look into the titles the settlers hold as some of them are descendants of people who bought the parcels and have no other place to call home.

Would the government displace them from the only ancestral land they have known since birth and still say it is concerned about every citizen? Let encroachers of Mau Forest not cause suffering to innocent citizens.

Post a comment
WATCH: The latest videos from the Star
by Weldon oriöp Kirui
Star Blogs
03 September 2019 - 05:00
Read The E-Paper