Governor Johnson Sakaja has his work cut out. There is no honeymoon

• Anyango's distressing death is a dreadful metaphor of everything that is wrong with our public hospitals.

• Sakaja must remove from service the people responsible for the gross negligence. 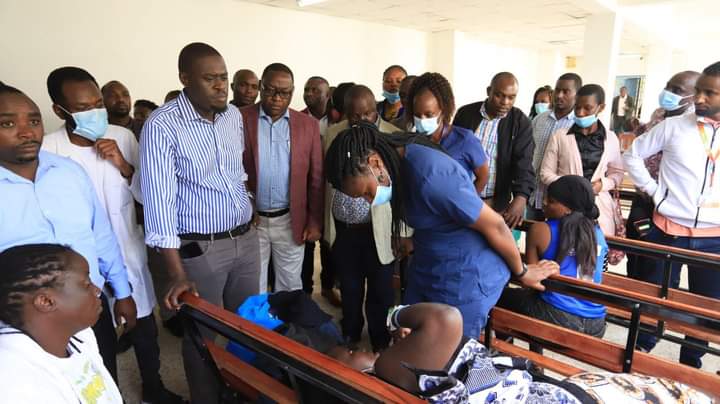 Nairobi Governor Johnson Sakaja during his impromptu visit to Mama Lucy Kibaki Hospital on September 11, 2022. He found patients sharing beds and there were no drugs
Image: JULIUS OTIENO

Her twin boys having been safely delivered via caesarean section, she must have been looking forward to happy days caring for her babies.

That is where her hopes ended and tragedy began. Her harrowing ordeal is only too familiar to the long-suffering poor anywhere in Kenya.

The cold-hearted medical teams ignored all her poor husband's pleas for help.

He could see his wife bleeding profusely. His pleas for help only yielded admonition.

Yet this is not your ordinary village clinic. It is one of the major hospitals in the eastern parts of the city.

Her husband, at a point of desperation, started to do what the nurses are hired to do - change her blood soaked bandages and cut off her intravenous drip.

When the medics realised the patient's condition was getting out of control, they proposed a transfer to Kiambu.

But an ambulance that was to transfer the patient at 8pm took four hours to arrive. The whole system is broken.

By at 8am, eight hours later, Anyango was dead.

Governor Johnson Sakaja has his work cut out. There is no honeymoon.

He must probe the circumstances that led to Anyango's death and remove from service the people responsible for the gross negligence.

Anyango's distressing death is a dreadful metaphor of everything that is wrong with our public hospitals.

Heart-broken husband: My wife's life could have been saved

Excessive bleeding claimed the life of Maurine, 28, after childbirth
News
2 weeks ago