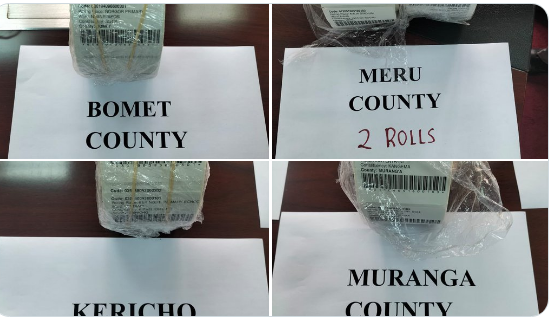 Name of counties where 17 rolls of stickers targeted to serve various polling stations estimated to be 10,000 in number.
Image: DCI

Kenyans have in the past four days been treated to drama between the police and the Independent Electoral and Boundaries Commission on the arrest and mission of three Venezuelans.

However since last Thursday, accusations and counter-accusations are being levelled between the two institutions.

The IEBC on one hand claims that the trio were officially in the country and that their arrest is part of a scheme to intimidate its officials.

But police claim that investigations show the group entered country in a clandestine manner, had sensitive electoral material and their mission was private and unknown.

Such a scenario just 15 days to the election does not inspire confidence in the electoral commission.

The level of suspicion around the election hits a crescendo and IEBC must do everything to assure all that there is no mischief in any action it undertakes.

Chebukati and his team have so far tried to be open in their undertakings, but a last-minute slip could just torpedo all the effort they have put in to prepare for the polls.

Quote of the Day: “If you are not a thinking man, to what purpose are you a man at all?”

"Stickers are not strategic election material."  - IEBC
News
3 weeks ago

Company has been accused of providing kits that are vulnerable to tampering.
News
3 weeks ago
Leader
25 July 2022 - 04:00