JUNET MOHAMED: We are going for a first round win

A huge chunk of Mt. Kenya region will vote Azimio.

•Ever since his first presidential run in 1997, Raila Odinga has continued to confound friends and foes.

•And while he has been written off in every subsequent election cycle, he has continued to upset the political matrix. 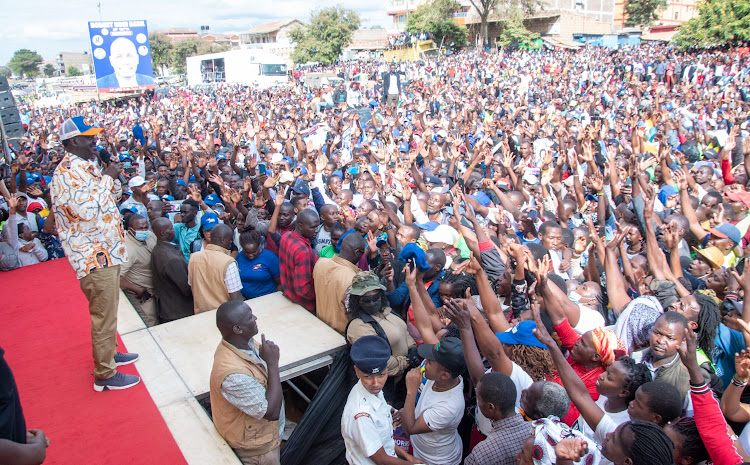 Former Prime Minister Raila Odinga will be on the ballot as the presidential ticket bearer for the Azimio Coalition.

This ticket also carries the Hon. Martha Karua, the former Minister for Justice and Constitutional Affairs, who will be our next Deputy President.

Ever since his first presidential run in 1997, Raila Odinga has continued to confound friends and foes with his knack for progressively expanding his voting constituency while also evolving and rebranding himself in every election cycle.

And while he has been written off in every subsequent election cycle, he has continued to upset the political matrix.

He also surprises the naysayers by assembling a formidable political machine whose dominance in every election cycle has rightly earned him the title of an enigma in Kenyan politics.

Azimio Coalition is going into this election with massive advantages in nearly all areas critical to a convincing first round win.

We have looked at the data and it paints an unassailable 60% landslide victory for Odinga and Karua.

All Raila traditional strongholds are backing him. The data we have indicates no shift at all in this regard from the last two elections.

In fact, we also can authoritatively reveal that these regions registered massively in the last voter listing, adding millions more to the tally.

For us in Azimio, we see a blue canvas with yellow patches mainly in the south and north rift regions of the Rift Valley.

In the Mt. Kenya region where Ruto has used millions to bankroll a mutiny against President Uhuru Kenyatta, the reward is increasingly ridiculously measly.

A huge chunk of Mt. Kenya region will vote Azimio.

This includes traditional Baba supporters who have stood with him over the years despite the threats, intimidation and violence in each election cycle.

They now have nothing to fear. Then there are Uhuru loyalists. Those who believe the president has achieved unprecedented progress for our country. Those who see in President Uhuru a man who means well for Kenya.

But the groundswell for Azimio in Mt. Kenya are the ordinary people.

The vast majority of Mt. Kenya people want someone who is not vindictive or criminally intent to destroy the wealth that their people have generated over the years and which has immensely benefitted their region.

In this election, the battlegrounds are few.

Our traditional strongholds of Western Kenya, which include Nyanza and the Western region; Lower Eastern, Coast, Nairobi, Maa region and Northern Kenya have all stonewalled Ruto's entry.

In the western region, where Ruto expects a miraculous 70% vote to be delivered by Musalia Mudavadi and Moses Wetangula, the outfit will be lucky to bag 20% of the vote.

Ukambani, one of the regions our opponents had hoped will be up for grabs, is firmly in Azimio with Hon. Kalonzo Musyoka, Governor Charity Ngilu, Governor Kivutha Kibwana and many other leaders from the region holding the ground tightly for Azimio.

The numbers, tucked in the broadest coalition ever assembled, look so good. But so are the issues.

We in Azimio have framed the issues we want to canvass in this election in three broad categories.

One, we believe in national unity as a cornerstone of national development.

Considerable effort has been put into this issue. ‘Azimio la Umoja’ is essentially a ‘quest for unity".

In a multi-ethnic, multi-religious country like ours, unity is a stabilizing ingredient for state development.

It brings out a sense of common ownership of the affairs of our country and its destiny. It makes everyone a critical cog in the machinery of government.

Our unity platform is therefore the answer to William Ruto’styrannical majoritarianism.

The second issue for us in this election is zero tolerance for corruption.

We have identified corruption as the greatest threat to national development.

Since handshake, the country has witnessed massive development projects in nearly every part of the country, much of which has been made possible by the deliberate effort to stall runaway corruption within the government.

The third issue is rapid economic development that benefits all.

To grow our economy we must look at the laws governing the economy.

The basic foundation of any society is a legal system which promotes the greater good while thwarting evil.

No one wants to invest in a lawless country run by criminals getting protection from the state.

In Azimio, we do not accept the view that the choice in August is between the economy and constitutional reforms.

We believe legal reforms are necessary in improving the economy.

We believe you cannot grow the economy without a robust legal regime to safeguard that economy from the machinations of the corrupt and the greedy.

Constitutional reforms have been at the heart of Kenya’s economic progress.

The Constituency Development Fund (CDF) was a legal reform.

Devolution, which has radically transformed the manner in which national resources are shared, was a constitutional reform.

An economy of overnight millionaires and billionaires is unsustainable. This is unacceptable to us.

As Raila Odinga formally begins this campaign, I have no doubt in my mind that we will win this election in the first round, with a strong mandate to form the next government and deliver to the people of Kenya.

Hon. Junet Mohamed is the Secretary-General of the Azimio Coalition.