There is no freedom without responsibility.

On Wednesday, the country was treated to ugly scenes as Members of  the National Assembly voted on a number of proposed amendments to  the Political Parties (Amendment) Bill, 2021.

Chaos erupted as MPs opposed to the amendments clashed with proponents of the Bill.

While lawmakers supporting President Uhuru Kenyatta and ODM leader Raila Odinga wanted the Bill to sail through the Third Reading without any amendments, those allied to Deputy President William Ruto came up with at least 27 amendments.

The push and pull triggered chaotic scenes that saw members engage in fistfights in full glare of cameras.

The unfortunate behaviour brought the National Assembly into disrepute.

Parliament is regarded as the august House and is thus expected to be a place of respect and honour where logic, and not emotions, reign supreme.

It is, therefore, regrettable that MPs can decide to throw morality out of the window in favour of hooliganism and violence.

The disorderly conduct must be punished. While MPs have parliamentary privileges that insulate them from legal action, such freedom must come with equal measure of responsibility.

The leadership and integrity laws as well as the Public Officers Ethics Act should be the guiding cardinal. 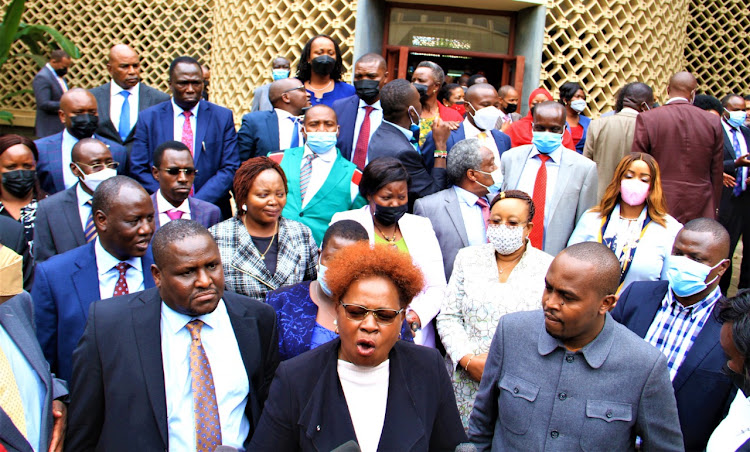 Tangatanga MPs issue a statement during a press conference at Parliament Buildings after the voting of the second reading of Political Parties (Amendment) Bill, 2021 on December 22, 2021.
Image: EZEKIEL AMING'A