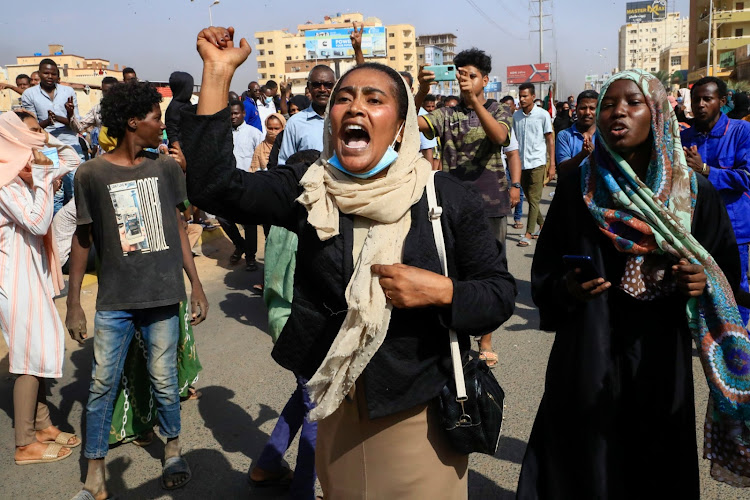 Sudanese protesters march in 60th Street in the capital Khartoum, to denounce overnight detentions by the army of members of Sudan’s government, on October 25.
Image: AFP

Sudan's military leader Gen Abdel-Fattah Burhan has said that the military seized power on Monday to prevent 'civil war' with civilians in the government.

This was a bit rich considering the army has been in power since 1989 when Gen Bashir seized power. They were forced into a power-sharing government after mass demonstrations in 2019. Prime Minister Abdalla Hamdok is now under house arrest.

However the army remained reluctant to take orders from politicians in the transitional government.

Burhan obviously hoped that the international community would turn a blind eye to the coup, as they did with the Burmese generals in February. But, unlike Myanmar, Sudan still needs support from the World Bank, IMF and foreign donors.

The army also cannot govern without popular cooperation and now doctors, oil workers, and other essential service providers are threatening to go on strike.

Sooner or later, Burhan is likely to back down and restore civilian rule. But this time the army should be completely excluded from government. Its actions show that they do not understand that governing requires coalitions and compromise and that there are no quick fixes to the problems of the Sudan.

Quote of the day: "We have enough religion to make us hate, but not enough to make us love one another."

At least 10 people are reported to have been killed since the unrest began.
News
3 months ago

Burhan announced a state of emergency, saying the armed forces needed to protect safety and security. H
News
3 months ago