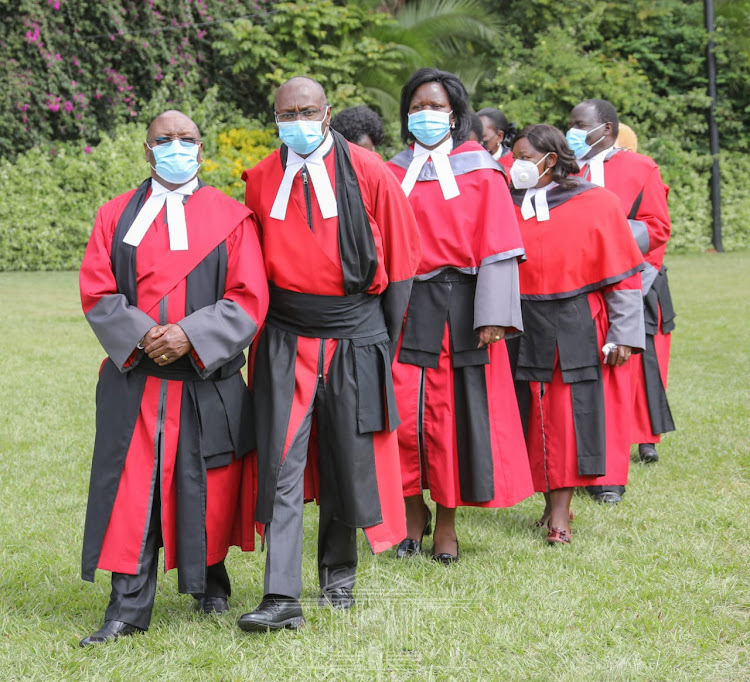 Judges of the Court of Appeal and various Divisions of the High Court at State House, Nairobi for their Swearing-in Ceremony presided over by President Uhuru Kenyatta on June 4, 2021.
Image: PSCU

The Judiciary, we are often reminded, is a major pillar in a democracy.

Its independence is reassuring evidence that the rights of the high and the low are protected and in the event of a dispute, litigants, rich or poor, will get a fair hearing and an amicable and fair settling of disputes.

This year alone, our courts have made three major decisions that have generated strident national debate.

The decisions have turned the focus on judges and magistrates whose power, by and large, relies on the integrity of the decisions they make.

The series of decisions, setbacks to Kenyatta administration initiatives, smack of vendetta.

The Judiciary needs, desperately, selfless introspection. When judges are suspected of criminal conduct, the public has come to expect that they will be protected by fellow judges. They will be treated to lengthy injunctions blocking arrest and prosecution.

When a top lawyer is suspected of a serious crime, they might as well take a year or more to be charged.

When tapes are presented to the JSC because a judge is thought to have taken a bribe, the public has come to expect a protective wall of silence.

The accumulative effect of such conduct is to lose the confidence of the public. The Judiciary becomes a club of the rich and powerful interested only in protecting delinquent members.

QUOTE OF THE DAY: “Each person must live their life as a model for others.”

The American civil rights activist who refused to give up her seat on a bus to a white passenger, died on October 24, 2005

Why I proposed ‘election’ of judges - Zack Kinuthia