• The 2010 Constitution gives the JSC the power to select judges. The President then formally appoints them 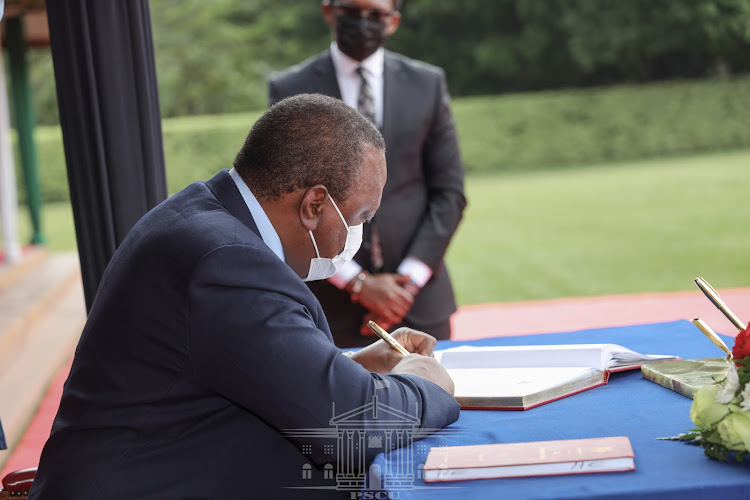 President Uhuru Kenyatta presided over the swearing-in of the 34 judges on Friday at State House, Nairobi.
Image: PSCU

Last Thursday President Uhuru Kenyatta satisfied no-one by appointing only 34 of the judges recommended to him by the JSC and not appointing six other judges.

The Judicial Service Commission recommended the appointment of 41 judges in 2019 but Uhuru declined to do so. Under the 2010 Constitution, the JSC chooses judges and the President's role is merely to formally appoint them. The President therefore acted unconstitutionally by not appointing these six judges.

The criticism is almost unanimous. Former Chief Justices David Maraga and Willy Mutunga have warned of a descent into anarchy. The present CJ Martha Koome urged Uhuru to appoint the remaining six judges. The legal community is upset.

The President said he had received an NIS report with serious allegations against them. But the JSC has not seen that report.

Let President Kenyatta now appoint the remaining six judges. He should then immediately forward the NIS report to the JSC which can then set up a tribunal to investigate the judges. If the tribunal upholds the allegations, the judges will not only not be appointed but will permanently be removed from office.

The President would then have acted constitutionally in blocking the promotion or appointment of these six judges.

Quote of the day: "Remember upon the conduct of each depends the fate of all."

Alexander the Great
The Macedonian king died on June 11, 323 BC

Keep to your lane, Maraga tells Uhuru over rejection of six judges

EX-CJ blasts the President for disregarding the rule of law, wants judges appointed.
News
2 weeks ago

"My only departure is that mine will be a bottom-up approach" - Koome.
Counties
3 weeks ago