• Raila Odinga must be a student of Winston Churchill, who once said those that fail to learn from history are doomed to repeat it.

• His call for Nyanza politicians to embrace President William Ruto was a welcome statement to offset the tension. 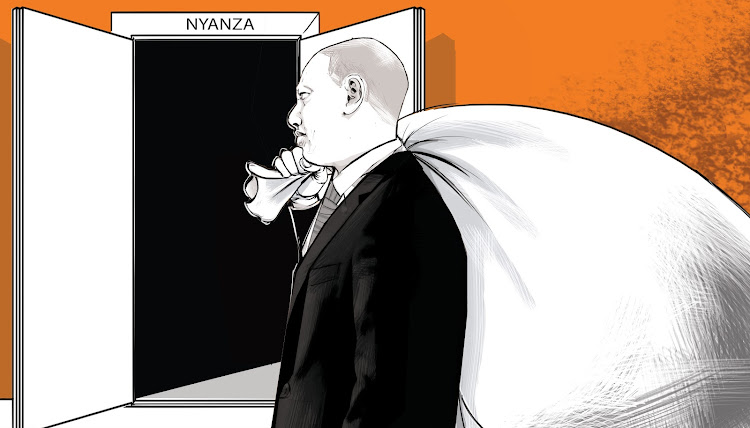 A hunter, not very bold, was searching for the tracks of a Lion. He asked a man felling oaks in the forest if he had seen any marks of his footsteps or knew where his lair was.

"I will," said the man, "at once show you the Lion himself."

The hunter, turning very pale and chattering with his teeth from fear, replied, "No, thank you. I did not ask that. It is his track only I am in search of, not the Lion himself."

We say that a hero is brave in deeds as well as words. These words have been coming into life over the last couple of days.

In 1969, Kenya's first President Jomo Kenyatta made a development tour of Nyanza that culminated in the stoning of his motorcade and eventual massacre of innocent Kenyans. What happened thereafter was the developmental sidelining of the entire Nyanza as a result of the unfortunate event.

This historical inference is to show what happens when politicians put politics before development. Those that suffer in the process are the residents of the area.

Raila Odinga must be a student of Winston Churchill, who once said those that fail to learn from history are doomed to repeat it. His call for Nyanza politicians to embrace President William Ruto was a welcome statement to offset the tension.

President Ruto made a historical visit to Nyanza at the weekend, which was mainly development-focused. Of course, there are the political undertones that come with such visits but the President is making good his words that no part of Kenya will be sidelined — even those that did not vote for him.

The President launched the first phase of the 5,000 affordable housing programme for Homa Bay county. The project is expected to not only alleviate the housing deficit in the county, but also significantly boost the local economy. The project will ultimately cover several towns — Oyugis, Kendu Bay and Mbita.

The President also launched and inspected other projects in the region, including commissioning the newly completed Homa Bay Municipal Market. The project is crucial to the economic transformation of the county, and will provide space for trade in agricultural products and thus boost the region’s economy.

Small markets such as the Pier fish market in Homa Bay are central to Kenya’s economic transformation and the national government should work with county governments to grow this sector that is a source of livelihoods for millions of Kenyans.

During the President’s two-day visit to the region, he also made interventions in agriculture and infrastructure, and presided over the commissioning of the Jaramogi Oginga Odinga University of Science and Technology Blue Economy Research Hub.

Additionally, the President also met local leaders and residents of the region, and listened to their issues. He also made several pledges.

The President also held discussions with the Migori administration led by Governor Ochillo Ayacko. As they discussed, fishing, infrastructure, mining and agriculture are essential elements of empowerment for Migori county, its economy and the people.

The tour by the President is key to ensuring the national and the county governments build on the gains that were made by former President Uhuru Kenyatta who also worked hard to ensure the region is not alienated.

The engagements are also a win for devolution, which is at the centre of the country’s development in the coming years as envisaged by the Constitution.

It is all our hope that the President continues with this work across all other counties and regions of the country. It is important that all Kenyans feel the benefit of having a government that is aimed at economic transformation of the country.

Post a comment
WATCH: The latest videos from the Star
by MACHEL WAIKENDA Political and Communications Consultant
Columnists
17 January 2023 - 05:00
Read The E-Paper