Neither man had any plan for the end-game

• Trump promised he’d join his thugs and cosplayers at the Capitol, but he let his Secret Service driver take him back to the White House instead.

• Bolsonaro wasn’t even in Brazil. He was in Orlando, Florida when things kicked off in Brasilia 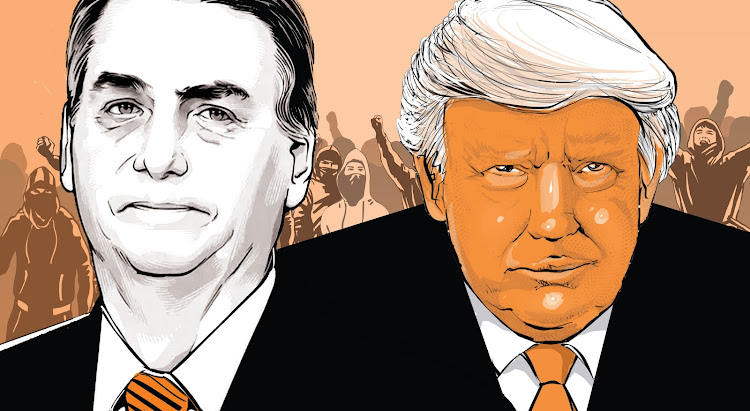 Pundits are making much of the similarities between the attempted coup in Washington by Donald Trump supporters two years ago and the one by Bolsonaro supporters in Brasilia last Sunday, but they are missing the biggest one.

These debacles were the most incompetent and half-hearted attempts to seize power illegally in the history of the world.

There are rules for how to do a successful coup. Seize control of the key media. Have your candidate for dictator declare his intentions early and clearly. Get the military, or at least part of the military, on your side. Make it look like you have already won, even if you haven’t. Don’t be afraid of a little exemplary killing.

Trump promised he’d join his thugs and cosplayers at the Capitol, but he let his Secret Service driver take him back to the White House instead. Not even Fox supported the seizure of the Capitol. The US military were not part of Trump’s plans at all.

Bolsonaro wasn’t even in Brazil. He was in Orlando, Florida when things kicked off in Brasilia. He, too, had failed to get the military’s support. And while Trump’s people did trap all 635 senators and representatives in the Capitol, the Brazilian Congress, Supreme Court and Presidential Palace were all empty. (It was Sunday, stupid.)

Above all, neither man had any plan for the end-game. Okay, you’ve seized the centre of official power, but what are you going to do next? Who are the top 200 people you need to arrest? Have you declared martial law yet? Are your own armed supporters out on the streets, wearing official-looking armbands giving them the right to ‘keep order’?

Certainly not in Bolsonaro’s case.

He knew the take-over of the capital was planned for January 8, but chose to be abroad to avoid arrest, if it went wrong. The governor and police chief of the Federal District were lined up to keep the police off the backs of the rioters – but thousands of others were waiting for a sign from Bolsonaro that never came.

Bolsonaro is basically a coward who willed the end but did not dare the means. So is Trump, who sat transfixed before his television wishing the insurgents to ‘win’, but never really understood that a win of that sort would ultimately require major violence. Fantasists, the two of them.

But that’s where the similarities end. The aftermath in Brazil has been brisk, verging on breathtaking. At least 1,500 of those who broke into the Congress, the Supreme Court and the Presidential Palace have been arrested, and most will face trial. The governor of the Federal District has been suspended and his police chief fired. Bolsonaro is self-exiled.

‘Follow the money’, which the Brazilian police have got very good at, will lead them back to the planners and funders of the events of January 8, and there will be more arrests, trials and sentences.

A number of the foot-soldiers of the attack in Washington have been tried and convicted as well, but despite the passage of two years it remains to be seen if there will ever be charges laid against those who go to work in suits. And while Bolsonaro slinks off into exile, Trump prepares his comeback run for the presidency.

What lessons can we draw from these events?

We can certainly say that Brazil defends its democracy more vigorously than the US, but can we also say that the crest of the populist wave has passed?

Probably not. Bolsonaro got 49 per cent of the votes in the recent presidential election and could try for a comeback, if he recovers his nerve. President ‘Lula’ da Silva faces a hostile Congress and will find scant resources for another round of boosting the poor out of poverty.

Trump probably can’t win the presidency again after his behaviour during the Capitol events. However, a more presentable candidate like Florida Governor Ron DeSantis, flying the same populist flag, could take back the presidency in 2024 unless Trump runs too and splits the Republican vote.

Modi is thriving in India, Orban is doing all right in Hungary, despite the war next door, and in the UK, Boris Johnson is allegedly planning a comeback coup against Prime Minister Rishi Sunak later this year.

It helps when the ‘bad guys’ are cowardly, lazy and stupid, but you really shouldn’t count on it.

Gwynne Dyer’s new book is ‘The Shortest History of War’.

Prosecutors said Mr Bolsonaro may have incited a crime by making such claims.
News
1 week ago

"Many people in the military police were complicit," the veteran leftist politician said.
News
1 week ago

Anderson Torres is accused of colluding with rioters behind attacks on government buildings.
News
1 week ago

Despite the tight security, officials said they welcomed potential protests - provided that they were peaceful.
News
2 weeks ago
Post a comment
WATCH: The latest videos from the Star
by GWYNNE DYER Business Commentator
Columnists
16 January 2023 - 05:00
Read The E-Paper