if Ukraine can achieve a decisive military victory (as we should all hope), it will find itself deeply indebted to the US and the EU. Will it be able to resist even greater pressure to open itself up to economic colonisation by Western multinationals?

As everyone knows, Volodymyr Zelensky played a Ukrainian president in the television series Servant of the People before becoming Ukraine’s president in real life, and that irony led many not to take him seriously (as if a president who previously served in the KGB is better). But less well known is the basic plot of the series.

Zelensky played Vasily Petrovich Goloborodko, a schoolteacher whose students record him ranting about corruption, share the video online (where it goes viral), and then sign him up as a candidate in the country’s next presidential election. Having unwittingly tapped into Ukrainians’ widespread frustration over corruption, Goloborodko wins, faces a steep learning curve in office, and eventually starts to confront the country’s oligarchy from his new position of power.

The show’s depiction of Ukraine is apt. Of all the post-communist countries in Eastern Europe, it was the hardest hit by economic “shock therapy” (sweeping market reforms and privatisation) in the 1990s. For three decades since independence, Ukrainian incomes have remained below where they were in 1990. Corruption has been rampant, and the courts have proven a farce.

As Luca Celada of il manifesto writes, “the ‘conversion’ to capitalism has followed the usual pattern: a class of oligarchs and a narrow elite have enriched themselves disproportionately by despoiling the public sector with the complicity of the political class.” Moreover, financial assistance from the West has always been “strongly tied to reforms that Ukraine was required to implement, all under the banner of fiscal restraint and austerity,” further immiserating much of the population. Such is the legacy of the capitalist West’s engagement with post-independence Ukraine.

Meanwhile, my sources in Russia tell me that President Vladimir Putin has assembled a group of Marxists to counsel him on how to present Russia’s position in the developing world. One can find traces of this influence in the speech he gave on August 16:

“The situation in the world is changing dynamically and the outlines of a multipolar world order are taking shape. An increasing number of countries and peoples are choosing a path of free and sovereign development based on their own distinct identity, traditions, and values. These objective processes are being opposed by the Western globalist elites, who provoke chaos, fanning long-standing and new conflicts and pursuing the so-called containment policy, which in fact amounts to the subversion of any alternative, sovereign development options.”

But, of course, two details spoil this “Marxist” critique. First, sovereignty “based on their own distinct identity, traditions, and values” implies that one should tolerate what the state is doing in places like North Korea or Afghanistan. Yet that is completely out of step with true leftist solidarity, which focuses squarely on antagonisms within each “distinct identity” in order to build bridges between struggling and oppressed groups across countries.

Second, Putin objects to “the subversion of any alternative, sovereign development options,” even though that is exactly what he is doing in Ukraine by seeking to deprive its people of self-determination. 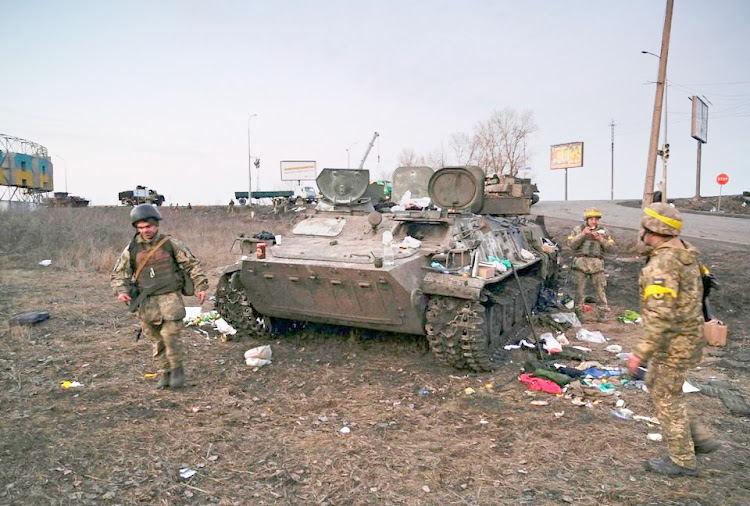 Ukrainian servicemen are seen next to a destroyed armoured vehicle, which they said belongs to the Russian army, outside Kharkiv, Ukraine, on February 24, 2022.
Image: REUTERS

It would be tragic if Ukraine defeated Russian neo-imperialism only to yoke itself to Western neoliberalism. To secure genuine freedom and independence, Ukraine must reinvent itself.

Putin is not alone in pushing this pseudo-Marxist line. In France, the far-right leader Marine Le Pen now presents herself as the protector of ordinary working people against multinational corporations, which are said to be undermining national identities through the promotion of multiculturalism and sexual depravity.

In the United States, the alt-right succeeds the old radical left with its calls to overthrow the “deep state.” Donald Trump’s former strategist Steve Bannon is a self-proclaimed “Leninist” who sees a coalition of the alt-right and the radical left as the only way to end the reign of financial and digital elites. (And, lest we forget the progenitor of this model, Hitler led the National Socialist German Workers’ Party.)

More is at stake in Ukraine than many commentators seem to appreciate. In a world beset by the effects of climate change, fertile land will be an increasingly valuable asset. And if there is one thing Ukraine has in abundance, it is chernozem (“black earth”), an extraordinarily fertile soil with high concentrations of humus, phosphoric acids, phosphorus, and ammonia. That is why US and Western European agrobusiness firms have already bought up millions of hectares of Ukraine’s farmland – with 10 ten private companies reportedly controlling most of it.

Well aware of the threat of dispossession, the Ukrainian government imposed a moratorium on land sales to foreigners 20 years ago. For years thereafter, the US Department of State, the International Monetary Fund, and the World Bank repeatedly called for this restriction to be removed. It was only in 2021 that the Zelensky government, under immense pressure, finally started allowing farmers to sell their land. The moratorium on sales to foreigners remains in place, however, and Zelensky has said that lifting it must be put to a national referendum, which would almost certainly fail.

Nonetheless, the cruel irony is that, before Putin launched a war to colonise Ukraine by force, there was some truth to the Russian argument that Ukraine was becoming a Western economic colony. If the conflict has any silver lining, it is that the neoliberal project has been put on hold. Since war demands social mobilisation and a coordination of production, it offers Ukraine a unique chance both to halt its expropriation by foreign corporate and financial entities and to rid itself of oligarchic corruption.

In pursuing this opportunity, Ukrainians must bear in mind that it is not enough simply to join the EU and catch up to Western living standards. Western democracy itself is now in deep crisis, with the US veering toward ideological civil war, and Europe being challenged by authoritarian spoilers from within its own ranks. More immediately, if Ukraine can achieve a decisive military victory (as we should all hope), it will find itself deeply indebted to the US and the EU. Will it be able to resist even greater pressure to open itself up to economic colonisation by Western multinationals?

This struggle is already playing out beneath the surface of Ukraine’s heroic resistance. It would be tragic if Ukraine defeated Russian neo-imperialism only to yoke itself to Western neoliberalism. To secure genuine freedom and independence, Ukraine must reinvent itself.

While being a Western economic colony is certainly better than being absorbed into a new Russian empire, neither outcome is worthy of the suffering Ukrainians are now enduring.

Shortly after Russia invaded Ukraine, Lukoil called for the war to end.
News
3 weeks ago

Russia has already significantly reduced gas exports via the pipeline.
News
4 weeks ago

The likelihood that the Russians would actually choose to go down this road is currently quite low, but it is not zero.
Opinion
4 weeks ago
Post a comment
WATCH: The latest videos from the Star
by Slavoj Žižek
Columnists
02 September 2022 - 04:00
Read The E-Paper