MAKODINGO: Why Ruto is opposed to Political Parties Amendment Bill

William Ruto is obsessed with the idea of a “National Party”. 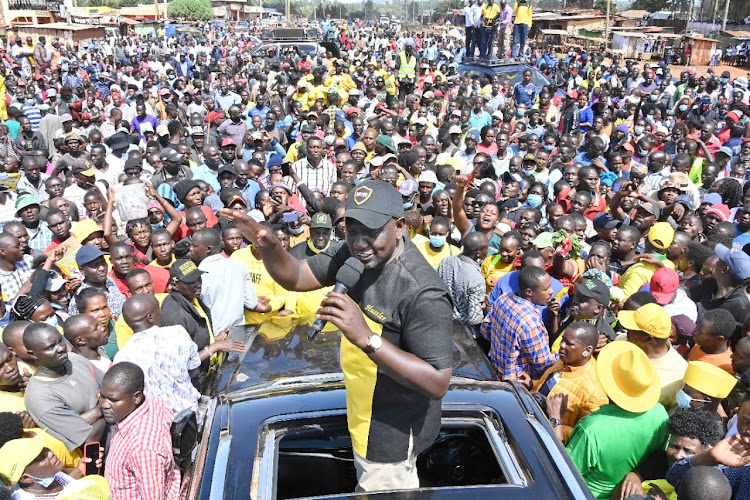 “We are building a National Party” – William Ruto

William Ruto is obsessed with the idea of a “National Party” – presumably a Party with elected leadership representation from all over the country. This was the obsession that made him force an unnecessary merger of URP and TNA – a union that was working perfectly at the time – and which has left him with egg on his face after he cannibalized Jubilee Party. He is a man obsessed with CONTROL. He does not want to deal with anyone he cannot whip or read the riot act to. He is obsessed with numbers he controls and can tout in political rallies to deride his opponents. He wants to be able to rig whoever he doesn’t like out of the party as he is believed to have done to those from Mount Kenya he believed would threaten his hold on the region. But more importantly, he is obsessed with the idea of being seen as a National leader and not a Kalenjin one – and he knows if he left it free for all, UDA would become just that – a Kalenjin Party as other leaders, especially Mt Kenya, choose to go with smaller parties where they are guaranteed tickets and would not have to be at the mercy of William Ruto and his obsession with subservience.

And in this obsession, there is a stark difference between him and Raila Odinga that the latter has demonstrated in the last two elections he has been a Presidential Candidate in – that of coalition builder. And there are very clear philosophical differences in their approach to ascension to power.

To explain the philosophical differences, let me use the analogy of the two methods used to construct houses in my village - communal construction and professional contractor developers.

When you want to construct your own home in my village, most people just need to get the basic building blocks – timber, logs, iron sheet (or grass for grass-thatched houses) and nails. Labour, tools and sometimes food are contributed by your relatives, friends and neighbours. Everybody comes with what they have – some will come with wheelbarrows, some with tarimbo, jembes, hammers, measuring tapes – basically, you village-source the construction work. The women would fetch water, cow dung, prepare food, and prepare the walls. These communal constructions give the people involved some form of ownership and community belonging. Anyone can walk into your home and expect that they will share the food you have prepared as they share their stories and struggles.

The other method is usually reserved for “persons with” – those who have sufficient resources to hire a contractor to build the house. In this method, everyone who works on the construction site does so as a paid contractor. Nothing is done for free – even the water fetched by the women is paid for per jerrycan. The people who do this do not owe the community anything. In fact, a high wall to keep villagers away from your home is a core part of the construction. No one can claim any entitlement to this home because everyone was fully paid for the contribution they made. Community attachment does not exist.

Raila Odinga’s Azimio La Umoja is the first method of construction. All members of the community are welcome to bring their contribution. If you have a political party you are as welcome as a group of young people wanting to participate. Like that villager who is seeking the help of all community members to construct a home, Raila Odinga has sought the help of Kenyans to build a coalition. Uhuru Kenyatta has provided roofing materials; Junet has provided a hammer; MKF have provided timber; Joho and Oparanya have provided cement; Wamalwa and Wamunyinyi are bringing food for everyone to eat while building (no pun intended) and Kenyans are bringing water and labour. He has made the decision to welcome everyone and therefore is not threatened by Coalitions or any timelines that the Political Parties (Amendment) Bill has put in place. He is not locking anyone out because he wants his to be a community home.

William Ruto on the other hand is that rich neighbor who wants nothing from the community. He has all the building materials and money to pay for labour and other incidentals. He is very clear that your value to him is measured in monetary benefit and ends with your paid contribution when you join. If you insist on having your party then you must stay out. He is very clear that his UDA house is his property and he will pay whoever wants to join – and indeed people are being paid.

The UDA Party Leader does not want to build a coalition with anyone – and even if he were to need one, he wants to leave that decision for as late as possible in the electoral calendar. Preferably, he would wish to encourage other opponents, not being Raila Odinga, to go it alone and negotiate a coalition after the elections. That way, he can always buy them as he has successfully done with the Jubilee MPs he parades around the country. He also wants to give the undecided One Kenya Alliance (OKA) Principals more time to come up with a coalition and therefore not be pressed to join Raila because of timelines. A Bill that forces coalition agreements to be concluded six months to the next elections does not give him much time to play the OKA principals against each other. He wants them desperate enough to be able to get a better deal from them that does not cost him much money and concessions.

Another consideration, probably more important for him, is numbers in Parliament. William Ruto knows very well the hell he has given President Uhuru Kenyatta with Jubilee where he incited nearly every Jubilee legislator against the President so much so that the latter had to seek the help of NASA to govern. He does not want anyone calling themselves a Principal to do that to him should he win the Presidency. More importantly though, he knows there is a realistic possibility that he would lose the Presidency. In that very likely scenario, he wants to have sufficient numbers in Parliament from a party in which he can exercise disciplinary control that he can then use to negotiate for a handshake with Raila post-election. And he wants this avenue to remain open to him. The only way he would have more negotiating power than say Musalia Mudavadi would be to have significant enough numbers that Raila would not govern without his Party – and he cannot have that if UDA only has members of Parliament from Kalenjin Rift Valley where he can easily enforce six-piece voting for UDA candidates across the board.

For William Ruto, this battle is a matter of political life and death.

Politicians drawn from Kieleweke and Tanganga differ on the true intention of the radical proposal.
Counties
11 months ago
Post a comment
WATCH: The latest videos from the Star
by MAKODINGO WASHINGTON Devolution and Governance Expert
Columnists
04 January 2022 - 17:36
Read The E-Paper