Yes, Kenyans are being held as slaves until their benefactors pay in full.

•A lot of them are blood relatives of these drug traffickers. And some may never come back.

•Some of these cases of Kenyans being used as guarantors for drugs until payment is made sound like movie plots. 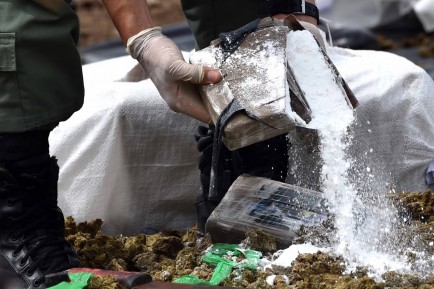 As we speak, there are tens of Kenyan citizens being held in foreign countries by drug trafficking organizations as ransom awaiting payment for consignments taken on credit. Yes, Kenyans are being held as slaves until their benefactors pay for their drug consignments in full.

A lot of them are blood relatives of these drug traffickers. And some may never come back. Some of these cases of Kenyans being used as guarantors for drugs until payment is made sound like movie plots.

To a lot of Kenyans, the drug trafficking menace is something that affects unknown people with bales of money to spend. It is a problem that affects others and not them.

Within what they know, the drug problem they know is an alcohol abuse problem – and if it gets worse then it is marijuana. If you told them that problem is akin to slavery – with people especially those involved in the supply chain literally getting enslaved, they would not understand.

A recent report on security challenges facing Kenya has identified international drug trafficking as one of the challenges the country has been grappling with for the last decade. The report has exposed what security agencies perceive as an endless cycle of the trafficking menace that has roped in Kenyans in their numbers. In the report, human courier identification and recruitment by Drug Trafficking Organizations that have spread their influence to the East African coast continues to be one of the key areas of focus for security agencies in a bid to curtail their activities.

In the last decade, there has been a notable shift in the involvement of Kenyans within drug trafficking networks which has seen them take up more senior roles within drug organizations with the hopes of making quick money. Initially, the higher roles were a preserve of mostly West African citizens and other foreigners while Kenyans were more of the support persons whose main roles were to undertake small errands for the traffickers. However, this has since changed due to the continuous deportation of West Africans involved in drug trafficking by Kenya’s security agencies since 2013.

The development has necessitated the establishment of what might be described as a complete system of drug trafficking operations in Kenya from the main importers to the recruiters and facilitators. For instance, Kenyans are now actively taking up key roles of purchasing narcotics directly from suppliers in Afghanistan and Pakistan. These narcotics arrive into the Eastern African region through the ‘Southern Route’ which are then collected from countries such as Mozambique, Madagascar and Tanzania.

Why drug lords are no longer at ease

In order to receive narcotics on credit, some Kenyan drug traffickers are using their relatives as guarantors/captives whom they ‘deposit’ with drugs suppliers abroad until payments are made in full. Some notable examples of Kenyans in servitude include the following people.

A gentleman called Eddy O* was sent as a guarantor by a Kenyan drug traffickers to a DTO in Pakistan in 2016 in lieu of drugs being sent to a Tanzania drug lord. He was held there for over a year until the stock was cleared and money paid back.

A Kenyan lady by the name of Peres, a close associate of a convicted Kenyan drug trafficker JOYCE A*, is an experienced courier. In the year 2015 she was sent as a guarantor to the Islamic Republic of Iran by drug trafficker RISPER A*. Peres was held in servitude for five months by the Iranian Drug Trafficking Organization until the debt for the narcotics consignment was cleared.

Peres was held in servitude for five months by the Iranian Drug Trafficking Organization until the debt for the narcotics consignment was cleared.

A Mr Samburuma was sent by a Risper A* to a Pakistani Drug Trafficking Organization in the year 2015. Risper was supplied with an unknown amount of heroin which was sent to Seychelles but was stolen by Seychellois buyers. Samburuma was detained by the Pakistanis until he escaped in the year 2016 and sought work in a poppy farm. He was arrested in the poppy farm during a raid by Pakistani Police and charged with terrorism offences but was later released and deported to Kenya after three months due to lack of evidence.

A Mr Otuoma was sent as a guarantor in May 2018 by Kenyan Drug traffickers John and Joash to a prominent Pakistan drug producer. In return, two Tanzanian traffickers received 50KG of heroin. In August 2021, two Seychellois received another consignment of heroin using Otuoma as security. He is still being held in captivity.

Kenyans have also established a niche within the drug trafficking networks of recruiting human couriers for both Kenyan traffickers and West African syndicates operating regionally and internationally. This has put many culpable Kenyans at risk of incarceration. This has in turn tainted Kenya’s image abroad with our citizens especially those travelling to Asia being subjected to inhumane and degrading treatment at airports abroad.

Facilitators on the other hand provide logistical services such as processing of passports and visas, falsified bank statements and ticketing processes from major airlines. This elaborate scheme has been unearthed by our vigilant sleuths who have implemented measures to sabotage their activities.

The narcotics trade in Kenya continues to attract more players notwithstanding the dangers they put themselves into. It is perplexing to note that some individuals continue engaging in the vice with utmost disregard for their future even as they play cat and mouse games with law enforcement agents. These individuals continue to expand their networks by recruiting new entrants thereby compounding the whole criminal network to the detriment of Kenya’s social fabric as well as the country’s image.

This elaborate scheme has been unearthed by our vigilant sleuths who have implemented measures to sabotage their activities.

The government of Kenya continues to look at ways to dissuade vulnerable Kenyans against engaging in narcotics trade. The introduction of amendments to the Narcotics and Psychotropic Substances Control Amendment Bill 2020 which provides for a wide reaching legal framework to address the narcotics menace which was passed by the National assembly in May 2021 is one such initiative. The bill is currently awaiting Presidential Assent. Even as the government continues to craft ways to safeguard Kenyans against this dangerous trade, it is incumbent upon every citizen to steer clear of any overtures that are aimed at recruiting them into the vice.

Paul Ilado is the head of content at Radio Africa Group.