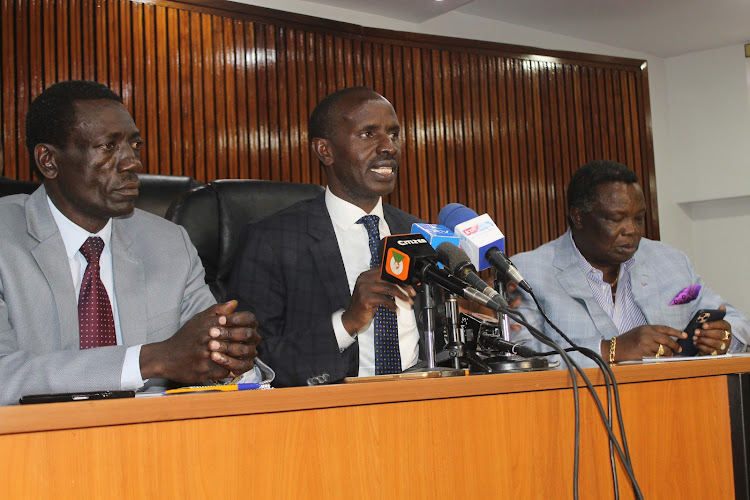 The resignation of Wilson Sossion, the immediate former Knut secretary general, and the subsequent election of Collins Oyuu to take over the giant teachers' union, attracted mixed reactions.

In his own confession, a tearful Sossion said the employer made teachers to suffer as a direct consequence of having him at the union leadership. Having disclosed the reason why teachers have suffered, his resignation gave members a glimmer of hope in the incoming new leadership.

And in a manner likely to vindicate Sossion's confession, TSC met the new leadership together with other teachers' unions and offered to increase maternity and paternity leave days from 90 to 120 and from 14 to 21.

It also hinted at considering transferring teachers who are couples to neighbouring schools subject to availability of vacancies. A move aimed at strengthening family bonding. It, however, failed to offer monetary remuneration citing hard economic situation due to the Covid-19 pandemic, an offer the unions wanted to hear more about.

Going by the first meeting with the new leaders and TSC's offer of non-monetary remuneration alone, there is hope that the government has teachers' interest at heart. However, TSC has a lot to do to make teachers feel appreciated and dignified.

First, since it is a constitutional right of employees to be in a union, TSC and Knut should work on a framework to have more teachers in the union. Those who may have been removed from union membership without their consent or through duress, should be reinstated.

Two, TSC should implement the proposed maternity and paternity leave as soon as possible.

Three, TSC should implement the proposed transfer of couples to neighbouring schools as soon as possible.

Five, in the spirit of new beginnings, the TSC and the unions can end the supremacy battle and settle disputes amicably for the benefit of all stakeholders.

Six, TSC should remit any outstanding union dues as was claimed by the former SG. Maybe by doing this and many more considerable acts, teachers will be able to understand who between the employer and their union failed them previously.

That is why TSC and the unions must consider the interests of teachers in their meetings. They should also consider the impact their decisions will have on schoolchildren and the academic calendar.

Fair industrial relations will avoid anything that not only disrupts the school calendar but also demoralises teachers and consequently makes children suffer. Both parties must endeavour to keep children in class now that there is a lot to recover from the loss occasioned by Covid-19.