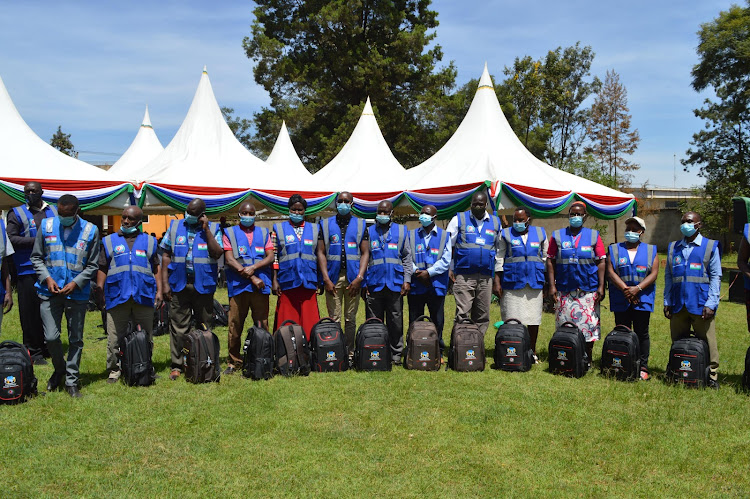 In December 2020 I spent a week with Community Health Volunteers in Busia county. This men and women are frontline agents of change, helping to reduce health disparities in underserved communities.

The CHVs are members of the community, nominated from within, who are tasked with improving the community’s health and well-being and linking individuals to primary healthcare services.

Since CHVs typically reside in the community they serve, they have the unique ability to bring information where it is needed most. They can reach community residents where they live, eat, play, work, and worship.

This trusting relationship enables them to serve as a liaison/link/intermediary between health/social services and the community to facilitate access to services and improve the quality and cultural competence of service delivery.

They offer interpretation and translation services, provide culturally appropriate health education and information, help people get the care they need, give informal counselling and guidance on health behaviours, advocate for individual and community health needs, and provide some direct services such as first aid and blood pressure screening.

Their positive impact has been facilitated by establishing clearly defined roles and tasks, supportive supervision, targeted incentives and consistent community and policy support, thanks to the Ministry of Health’s Community Health Strategy.

Since the first cases of Covid-19 were diagnosed, CHVs have played an important role in maintaining essential health services and fighting the pandemic. As the Covid-19 vaccination campaign continues, they can play an even bigger role: From identifying and enrolling target populations to tracking and reporting outcomes.

Since the Alma Ata Declaration in 1978, CHVs have been at the forefront, providing health services, especially to underserved communities in low-income countries.

The concept of community based health volunteer system has gained popularity in developing countries to overcome the increasing demand for healthcare services and the shortage of formal healthcare providers.

Since the Alma Ata Declaration in 1978, CHVs have been at the forefront, providing health services, especially to underserved communities in low-income countries.

The concept of community based health volunteer system has gained popularity in developing countries to overcome the increasing demand for healthcare services and the shortage of formal healthcare providers.

In the drive to achieve the Sustainable Development Goals by 2030, there is renewed focus on the contribution of CHWs. Efforts to achieve universal health coverage, and the SDGs, emphasise the need for countries to invest in their community health workforce to support the delivery of primary healthcare interventions.

This call to action has witnessed African governments make commitments to address the human resources for health challenges, supported by global initiatives such as the One Million Community Health Workforce campaign.

In sub-Saharan Africa and most low-income settings, CHVs’ contribution to community health has resulted in several health indicator gains in child health, maternal and reproductive health, malaria and HIV-Aids.

In Kenya, CHVs have been found to be effective in reducing neonatal mortality, child mortality attributable to pneumonia and mortality caused by malaria. They have been actively involved in programmes that target infectious conditions such as HIV-Aids and tuberculosis as well as maternal and child health.

During times of crisis, essential health services often decline, which can ultimately kill more people than the pandemic itself. One of the greatest dangers of a pandemic such as Covid-19 is interrupting care for other conditions by overwhelming already under-resourced health systems.

Globally, due to their potential reach and proximity to high-need populations, CHVs contribute to improving community health in many ways by diagnosing and treating illnesses such as malaria, pneumonia, and diarrhoea, making referrals to health facilities, providing health education, conducting nutrition surveillance, collecting vital events data, assisting with immunisation, and providing other aspects of maternal and child healthcare and family planning services.

WHO demonstrated the important role of CHVs in achieving Millennium Development Goal 4 on reducing child mortality, MDG 5 to improve maternal health, and MDG 6 to combat HIV-Aids, malaria and other diseases.

During times of crisis, essential health services often decline, which can ultimately kill more people than the pandemic itself. One of the greatest dangers of a pandemic such as Covid-19 is interrupting care for other conditions by overwhelming already under-resourced health systems.

There is increasing evidence that the effective engagement of CHVs can improve access to primary healthcare, especially where health services are not readily accessible. For example, during the Ebola epidemic, access to healthcare services fell by half, dramatically increasing deaths from malaria, HIV-Aids and TB. The vulnerable bore the brunt of the epidemic: Childhood immunisations were significantly reduced and, in some areas, the number of pregnant women delivering in health facilities decreased by more than 80 per cent.

CHVs remain an asset in bridging the interface between the community where most preventable health issues are found and the health system. Numerous factors exist that impede or improve CHVs’ ability to effectively provide services to beneficiaries. Investing in CHVs is not just the right thing to do, it’s a smart thing to do.

Community health workers can be part of an everyday system that can surge at times of crisis. Investing a few millions in them could prevent billions of shillings in economic losses, since every shilling invested in them brings returns to the economy in the form of outbreak prevention, improved health and longevity.

Public communications, Pharmacy and Poisons Board

County says developing capacity is crucial to fighting diseases at the grassroots and improving healthcare.
Counties
1 year ago

The 2,80 CHVs haven't been paid for over two years
Counties
1 year ago

We need you but won't pay you - health volunteers told

Senators say county wage bill will balloon if CHWs enrolled in payroll.
News
2 years ago
Post a comment
WATCH: The latest videos from the Star
by JUDY SIRIMA
Columnists
14 April 2021 - 04:00
Read The E-Paper