Raila isolated, 2022 looks set to be Ruto vs One Kenya 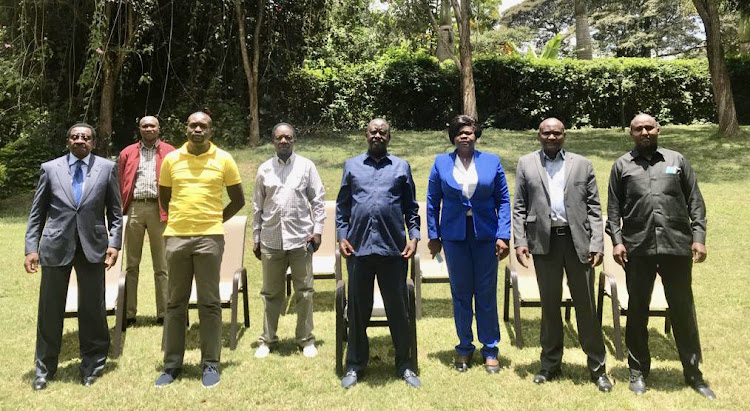 ODM leader Raila Odinga cut a forlorn figure in a photo circulated on Wednesday. The clique of party loyalists surrounding him was mostly small fry from Luo-Nyanza. Do secretary general Edwin Sifuna and treasurer Timothy Bosire count even at home?

Baba’s national footprint has shrunk. His allies have abandoned him to seek new friends.

It is the season of new coalitions. With just 16 months to the 2022 general election, the political scene is witnessing major realignments in the race to succeed Uhuru.

Nasa is dead. The Coast has broken away to cobble together a region-based political vehicle. Deputy party leader and Mombasa Governor Hassan Joho, his Kilifi counterpart Amason Kingi and Salim Mvurya of Kwale met President Uhuru Kenyatta the other week behind Raila’s back.

ODM’s other deputy party leader Wycliffe Oparanya appeared to read from a different script, suggesting on Tuesday the BBI referendum proposed for June should be pushed back and national resources dedicated to fighting Covid. Governor Oparanya is cracking the hard math as his two terms end.

Western, Eastern and parts of the Rift Valley are bases of the new One Kenya Alliance of Musalia Mudavadi (ANC), Kalonzo Musyoka (Wiper) and Gideon Moi (Kanu). The coalition has been energised by its by-election wins in Matungu and Machakos. It is also said to enjoy support from State House.

The rupture in Jubilee occasioned by the handshake has left the Mt Kenya bloc isolated and uncertain – but firmly united in its rejection of Raila. The region must soon make its stand known. Nairobi will be split.

Kenya is facing a transitional election like in 2002 and 2013. Since the resounding defeat of the Kanu dictatorship in 2002, wisdom around town is that no single party can win a presidential election.

With the return of multiparty politics in 1991, political parties had believed they could dislodge former President Moi solely through campaigns that exposed the brutality, wanton theft, mass poverty and collapse of public services associated with his regime.

It is highly unlikely any major politician will enter a coalition with Raila now. His best years are behind him. The handshake demobilised his national base and muted his critical voice that endeared him to millions. With Raila’s chances of winning the presidency in his fifth attempt getting slimmer by the day, One Kenya Alliance will be the formidable challenger to the clear frontrunner in the 2022 race – William Ruto.

But they hadn’t reckoned with the nation’s deeply ethnicised politics from the colonial days, intensified by the regimes of Jomo Kenyatta and his successor Moi. The divide-and-rule strategy deployed by the “professor of politics” reduced the Opposition to a pitiful Tower of Babel.

It was not until the Opposition united that it won a presidential election. The Narc coalition won in 2002 because of the political context of that year’s election. One, Moi was not in the race. The amended Constitution barred him from running.

Thirdly, Moi’s attempt to impose an unpopular greenhorn successor, Uhuru Kenyatta, backfired spectacularly, splitting Kanu and further fuelling the unity of the forces opposed to him.

A scenario similar to 2002 could unfold if Uhuru, having ditched Deputy President William Ruto, endorses Raila whose political fortunes have dwindled nationally following the handshake. He is unelectable in Mt Kenya, the Rift Valley, Western, Coast and Northeastern. His following is limited to Luo-Nyanza and sections of Nairobi.

No doubt the 2022 contest will be between a Ruto coalition and the One Kenya Alliance. Coalitions are nothing more than elite pacts that bring together ethnic vote blocs controlled by political kingpins. That is what politicians mean when they say they are ready to work with “like-minded leaders” for “national unity”.

Coalitions promise the sharing of Executive power among elites who bring the votes of their ethnic backyards to one basket. Clever political calculus for acquiring power.

It is highly unlikely any major politician will enter a coalition with Raila now. His best years are behind him. The handshake demobilised his national base and muted his critical voice that endeared him to millions. With Raila’s chances of winning the presidency in his fifth attempt getting slimmer by the day, One Kenya Alliance will be the formidable challenger to the clear frontrunner in the 2022 race – William Ruto.

The remaining task for One Kenya and Ruto is to win Mt Kenya and the Coast. Both are open. Neither region is likely to field a presidential contender. But it is the Mt Kenya bloc vote (plus its diaspora) that will decide the next president.

ODM immediately called off process of identifying its 2022 presidential candidate.
News
1 week ago