Ruto is not the first politician to be thrown under the bus.

• Raila was discarded soon after chaperoning Kibaki to power in 2002

• Kalonzo Musyoka, then vice-president, was similarly ejected from the Kibaki succession column in 2012. 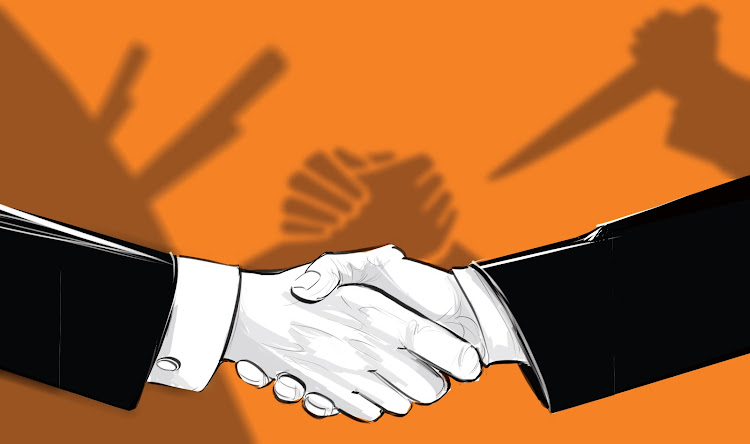 Pre-election mendacity, especially on the eve of a presidential succession, can be as treacherous as post-election violence. Both have the potential to destroy a fragile democracy.

Finding an antidote for vicious and cyclical post-election violence was one of nine pillars of the 2018 presidential Handshake —a precursor of the Building Bridges Initiative. President Uhuru Kenyatta, and ODM leader Raila Odinga have always belaboured this.

Right-thinking citizens are wondering what changed to allow the current pre-succession conspiracies. The disconcert with succession management is ominous. The President should restore order in the Executive to protect his legacy.

Deputy President William Ruto was the first presidential aspirant to raise the alarm. His alliance with President Kenyatta, which was built on flippant self-interest, is crumbling. The promise of Uhuru Kumi, Ruto Kumi has been reset: UhuRuto would leave the presidency when their shared term ends next year.

The two sought the presidency as a shield against prosecution at the ICC over crimes against humanity linked to the atrocities of 2007 post-election violence. About 1,200 were killed, and 600,000 were dispossessed. The economy was destroyed, and the national fabric shaken. It was the cost of winning President Mwai Kibaki a rigged second term.

The bond between Uhuru and Ruto lasted for as long as there was compelling self-interest. But after the ICC cases were dismissed and Jubilee's second term was secured, the DP became dispensable. The man has since deleted the system from his ambition enablers. The system, the DP claims, has its preferred presidential successor. Playing the victim of a capricious system, Ruto is counting on the people and God to help him hustle his way out of the Uhuru succession logjam.

The beleaguered deputy Jubilee Party leader has reason to feel violated: A power cabal, he has claimed, is muddling his presidential ambition. This cabal, or what remains of it, was key to Ruto teaming up with a co-accused to ward off — at any cost — an imminent danger to their freedoms. The DP has hands-on experience in rigging elections or a close association with those who rig elections. He also knows the cost of rigged elections from the 2007 experience: It nearly cost him his freedom.

The man was occupying the front seat in Jubilee succession of Uhuru until signs of discord showed after the 2017 repeat presidential election. Blame it on civil servants who are dabbling in presidential succession politics.

The DP, the initial front-runner in the Uhuru succession, is finding new ways of refloating his presidential ambition. The hustler ploy to rally the poor against the rich and the dynasty versus hustlers propaganda are among his pathways to State House.

Retreating and rebranding is still an option. Teaming up with other victims of pre-election rigging and rigged elections is also an alternative. The President and his cabal can still pre-empt the backlash and fury of the alliance of allies spurned.

The President, too, may have reason to feel disrespected. The DP has spent four years campaigning for an office whose holder is hail. Owners of power, and their enablers, detest such contempt.

Ruto is, however, not the first politician to be thrown under the bus. He knew it would come to this because he was told he would be duped and dumped. Leading politicians have walked the path of deceit before.

The camaraderie between the late Jaramogi Oginga Odinga dissipated in 1966 after self-interest replaced a shared cause for independence. A power cabal replaced Old Jomo's co-patriots Bildad Kaggia and Kung'u Karumba. The bond snapped when the populist Odinga realised Jomo and the cabal were not keen on economic freedom for the masses.

Raila was discarded soon after chaperoning Kibaki to power in 2002. It was Kibaki's third run for president. The so-called Mt Kenya Mafia — or the Five Ms as they were called then — ejected the Summit, the apex of the winning Narc campaign machine.

Kalonzo Musyoka, then vice-president, was similarly ejected from the Kibaki succession column in 2012. The gentleman from Tseikuru lost political value to the power cabal once Kibaki was sure he would complete his controversial final term in State House.

Ruto, the self-styled patron of the 'hustler nation', is the latest in a series of betrayals whose architects are power cabals around the presidency. Unless the BBI spirit holds, 2022 may be the turning point in betrayals whose perpetrators and beneficiaries have always been from the Mt Kenya region.