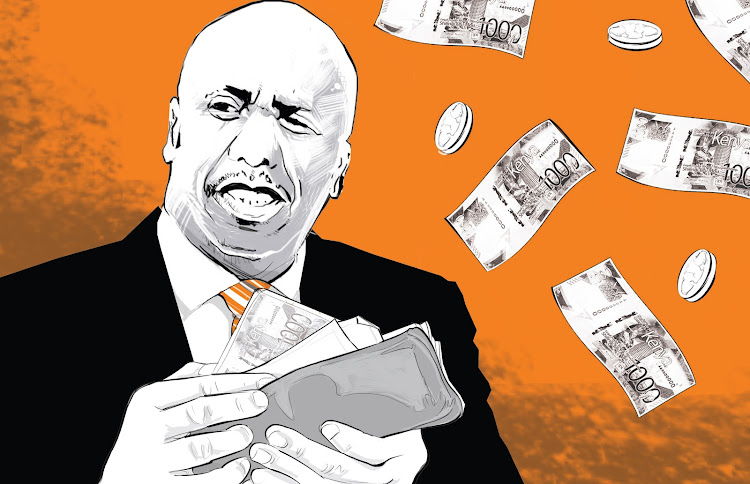 Senator Gideon Moi better unleash the wallet. The best time to have done so was yesterday. The next best time is today. The sooner the senator unzips his presidential campaign war-chest the better if he hopes to level up with a charged presidential aspirant, William Ruto.

Sitting there, detached, romancing the Nyayo legacy, and brandishing the Moi name isn't good enough. Power won't come easy, at least not in 2022, for the son of a former president.

Moi's son could be president some day, if this were the contract between Old Jomo and Old Moi, and between the late Moi, and incumbent Uhuru Kenyatta. These contracts could attract a backlash from public fatigue, with power rotating between two communities, the Kikuyu and the Kalenjin, since 1963.

Gideon needs time, like 2027 or 2032, to rebrand to be his own man. For now, the former Baringo Central MP needs to prove cynics have often read him wrong. He needs to fight for power, without the hue of entitlement.

Gideon knows, should know, getting back the throne to Kabarak and Sacho, the Moi residence and home turf, 20 years after its second return to Central Kenya, won't be easy.

Gideon Kipsiele arap Toroitich was the apple of Moi's eye. But the chosen one needs to shine. Continued detachment, and procrastination risk further assault on the Moi heritage.

Baringo county assembly rejection of the Constitution of Kenya (Amendment) Bill, 2020, one of three county assemblies to have voted 'No' to BBI, was a devious attempt to snatch the silver spoon from the mouth of Moi's blue-eyed son.

There have been successful attempts to dim the Moi empire. What better way to do it than hitting the prince of Kabarak below the belt! This time it's going to be vicious and personal between Gideon and the DP, a rank-outsider.

Moi's son is the immediate personification of the hustler rage and rant against children of privilege.

Old Moi, a pioneer hustler, in opportunistic parlance, became a 'dynast' after 47 years in public service, through resilience, and merciless accumulation of power and wealth. The son should not be different. The apple does not fall far from the tree.

A member of the Baringo county assembly for Tenges ward, Silas Tochim is Pin Tail the wasp in the unrelenting assault on the Moi citadel. There is no better person for the hatchet job than the county assembly member from Gideon Moi's cradle.

Robert Greene, a philosopher of power intrigues, tells of Pin Tale the wasp in The 48 Laws of Power: "A wasp named Pin Tale was long in quest of some deed that would make him for ever famous. So one day he entered the king's palace and stung the little prince, who was in bed. The prince awoke with loud cries. The king and his courtiers rushed in to see what had happened. The prince was yelling as the wasp stung him again and again. The courtiers tried to catch the wasp, and each in turn was stung. The whole royal household rushed in, the news soon spread, and people flocked to the palace."

The wasp said to itself, before it expired from its efforts, "A name without fame is like fire without flame." Tochim's stinging assault on the Moi legacy is the talk of Baringo.

Gideon stands the risk of being disinherited by a man of peasantry pedigree. One who, in circles of privilege, is not qualified to hold a candle to the son of Kenya's longest-serving President.

Old Moi, a pioneer hustler, in opportunistic parlance, became a 'dynast' after 47 years in public service, through resilience, and merciless accumulation of power and wealth. The son should not be different. The apple does not fall far from the tree.

Gideon needs to rebrand to protect the Moi heritage. Once bitten, he should be shy. But how did it get this rough for the inheritor of Fimbo ya Nyayo?

Those in the know have always shared information on how Ruto outpaced Gideon, to win over most Rift Valley MPs in 2007. Ruto wanted clout to bargain for a strategic position in the then change-charged ODM.

Indications were Raila Odinga would win the 2007 presidential vote. Ruto needed proximity to the centre, as an investment for his presidential ambition.

Ruto spent on Rift Valley delegates to win their loyalty. Whenever they met, he would pay the bills. He was scheming for ODM party presidential nominations.

The man knows how to leverage handouts. Ruto played the script the way former President Moi did during the years the DP understudied the grandmaster, as a Kanu activist, MP, assistant minister, minister, and presidential insider.

Gideon did not learn the trick of the carrot and the stick to attract followers under the master's feet. The Moi scion was raw in that realm in 2007, when foxy DP grabbed his birthright from under Gideon's feet.

Time has now come for the North Rift clash of cash for power between the 'peasant' and the 'prince'.