Uhuru finally lets the dog out 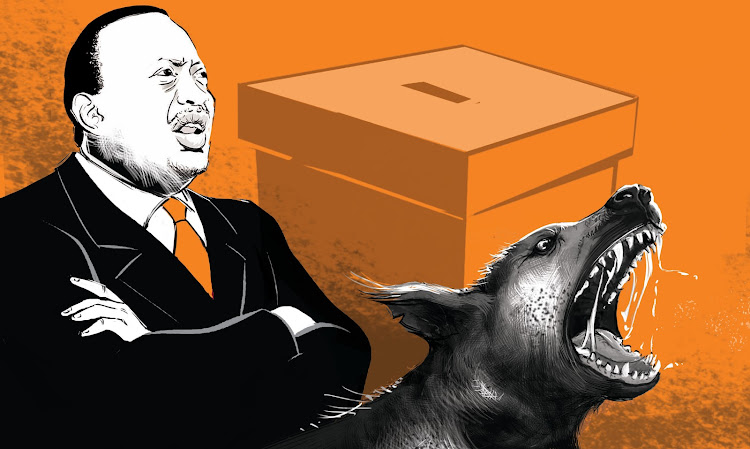 President Uhuru Kenyatta has exposed the underside of the hustler bandwagon.

The hustler versus dynasty discourse seeks to hide 60 years of tribal monopoly of State power.

The ‘national volleyball team’ cannot be a duet of the Kikuyu and the Kalenjin for eternity.

Coming from the President, the third from the Kikuyu nation, the statement opens the issue for public debate. T

hose who want to hide it, will tell you tribes don’t lead. Ethnic apologists claim it’s competent people from these communities who have occupied State House.

But ethnic democracy apologists ignore the truism that merit does not reside only around Kiambu and Nyeri counties of the Mt Kenya region. Or in the north of the Rift Valley. Merit can also grow in Mombasa, Siaya, Vihiga, Kitui and Bungoma.

The hustler propaganda seeks to exclude targeted individuals from the centre on account of their parentage.

Their easy target is Raila Odinga, a potential candidate who is yet to declare he is running for president in 2022. Others are Musalia Mudavadi, whose father, Moses Mudamba Mudavadi, was in President Moi’s Cabinet.

The other target is Baringo Senator Gideon Moi. His father, Daniel arap Moi, was President between 1978 and 2002.

The younger Moi’s presidential potential may be untested. But Raila and Mudavadi are presidential materials whose turns have been dimmed by the optical illusion of the Kikuyu-Kalenjin tango.

Merit can grow in Mudavadi’s Mululu home; it can blossom in Raila’s Bondo cradle. It can sprout in Kalonzo Musyoka’s Tseikuru backwaters. Murang’a county’s Peter Kenneth can also be part of this call for diversity.

The other target of the hustler propaganda is Uhuru Kenyatta. He is cited to attain a misleading generalisation. Behind the lie, is a craving for power to perpetuate ‘KK’ dominance.

Deputy President William Ruto, who was the target of the presidential jibe, is scouting for a Kikuyu presidential running-mate to bait Central Kenya vote. A win for the ticket would add 10 years of a Kalenjin-Kikuyu alliance, after 60 years of ‘tribacracy’.

The hustler propaganda craves State House. The running mate would be DP. This DP would also want Ruto’s support to roll ethnic democracy into another decade of exclusion. Kenyatta-Moi-Mwai Kibaki-UhuRuto regimes have run the country from 1963 to 2022.

Central Kenya has been fed for years to hate what Raila supports. His lead role in BBI is what is making Ruto popular among the Kikuyu. Yet from Kang'ata’s letter the subtext is, BBI was created to secure the political future of Mt Kenya region, especially when ‘our son’ is not the president.

United Democratic Alliance chairman Johnson Muthama captured the anomalous power relations in a memo to BBI Task Force on March 13, 2020: “Kenya is a multi-ethnic state composed of 44 tribes, which are officially recognised. Since Independence in 1963, only two tribes have been in power – Kikuyus and Kalenjins. Kikuyus have been in power for 33 years. Kalenjins 24 years.”

Speaking at Mululu Gardens last week during the burial of Mudavadi’s mother, the President sounded like he has seen the light. He wants change; the DP is pushing status quo politics, whose doormat is hustlerism.

This power equation has survived due to manipulation of the electoral system. A compromised electoral agency and the Deep State have fed the monster, resulting in electoral violence. BBI seeks to address this.

‘Our son’ were the lead words in Senate Chief Whip Irungu Kang’ata’s letter to the President on the supposed unpopularity of the BBI referendum among the Kikuyu. The senator wondered how the Kikuyu would cope without BBI goodies for the Mt Kenya region when ‘our son’ is no longer the president.

What does Kang’ata tell ‘other’ Kenyans – 43 communities – whose sons have been on the fringes of power for 60 years?

The handshake, the 2018 post-election amity between President Uhuru Kenyatta and the People’s President Raila Odinga, was a godsend. It remained so among the Kikuyu because it guaranteed the incumbent the ceasefire he needed to survive his second term. When the accord graduated into BBI, it assumed the hue of a conspiracy.

The propaganda has placed the masses of the Mountain between a rock and a hard place. This stingy middle is unwarranted: BBI is not about Uhuru seeking to extend his welcome, neither is it about him imposing an Odinga on the Kikuyu.

The super-spreaders of the propaganda are Mt Kenya MPs allied to the DP. They have cried sour in YouTube videos and other news bites.

Central Kenya has been fed for years to hate what Raila supports. His lead role in BBI is what is making Ruto popular among the Kikuyu. Yet from Kang'ata’s letter the subtext is, BBI was created to secure the political future of Mt Kenya region, especially when ‘our son’ is not the president.

Looking towards Swiss model of government

Our priority is to ensure presidential elections are not equated with outbreaks of genocidal violence.
Opinion
1 year ago

Raila called for a much representative government especially in the cabinet.
News
10 months ago

It is individuals that occupy State House not tribes
News
10 months ago
by OKECH KENDO Communications Consultant and University Lecturer
Columnists
13 January 2021 - 07:48