Government spending on agriculture remains low despite committing to spend at least 10% of annual budget. 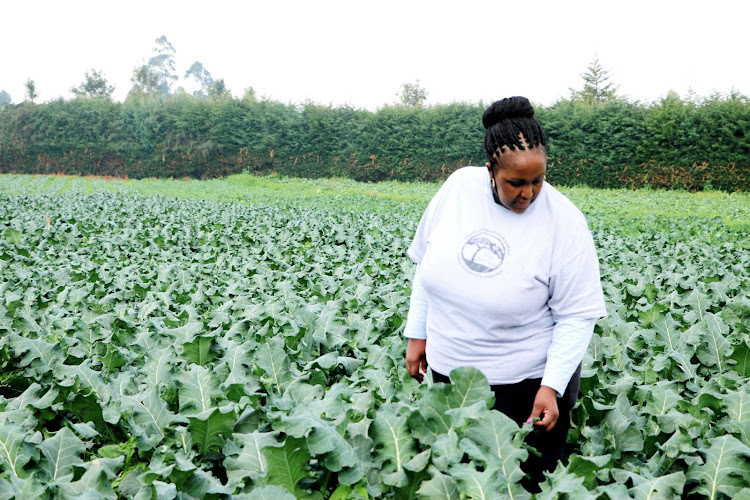 “We [can only] hope that tomorrow will be better than today,” says Elizabeth Thande, a farmer in Limuru.

Thande and her family have been floriculturists for years. Venturing into vegetable farming, however, brought her face to face with Kenya’s frustrating food system. Food system refers to the process food products go through from the farm to the plate.

Thande grows vegetables on her 18-acre Kisemeti Oakland Farm in Limuru. Like many smallholder farmers in Kenya, she and her daughter Mumbi are grappling with huge post-harvest losses and lack of market for their indigenous vegetables. They grow amaranth (terere), African nightshade (managu), jute mallow (mrenda) and kunde (cowpeas). They also farm exotic vegetables such as kales, cabbages, cauliflower, spinach, broccoli and Ethiopian kale.

Before the pandemic, the farm would sell three tonnes of vegetables per day, but now Thande and Mumbi struggle to sell even one tonne every two days. Their main clients are local supermarkets and a few hotels that have reopened.  “It’s hard to store perishables and sustaining the product is expensive,” Mumbi says.

Indigenous vegetables mature faster, within a month, unlike exotic vegetables such as kales, cabbages and broccoli, which take two to three months. Still, poorly organised markets affect the distribution of vegetables from the farm to the market.

The leading cause of post-harvest losses in Kenya is the lack of preservation and storage facilities. According to the Kenya National Bureau of Statistics, Kenya lost 1.9 million tonnes of food worth Sh150 billion ($1.4 billion) post harvest in 2017.

Eunice Mutua is the founder of Africa Sustainable Agribusiness and Agri-processing Network. The association brings together farmers, exporters, agronomists, local traders and research institutions involved in food systems. She says food systems work best when farmers have access to the right seed, pesticides and information for good production, post-harvest loss management, value addition and ready market for their products.

Mutua points out that what ails Kenya’s food system is the high cost of production, logistics (including transport) and availability of markets.

“Kenya has the highest cost of production in East Africa; our seeds and pesticides are expensive. We are importing so much. We don’t produce for the market. If we had an organised system, it would have been possible to produce enough for local consumption and for export,” she says.

The Kenya Agricultural and Livestock Research Organization recommends 10 tonnes of farmyard manure per acre for optimum production of indigenous vegetables. The average cost of a tonne of manure is Sh3,000. This increases the cost of production, with most smallholder farmers forced to sell their produce at farm gate or nearest markets to avoid additional transportation and storage costs.

In addition, Kenya’s food system fails to balance the demand and supply of products. Thande says the biggest challenge facing farmers is marketing. She cites instances where there’s a high demand for a certain crop in one part of the country, yet there’s an oversupply of the same crop in another part but there’s no linkage and farmers end up making losses.

This imbalance leads to unscrupulous brokers importing food from neighbouring countries cheaply and undercutting local farmers. Unbeknownst to many Kenyans, some of the indigenous and non-indigenous products in the supermarkets are imported, “Kenya is a net importer of soya beans, green grams, yellow beans, cowpeas, wheat and chickpeas. And Tanzania, Uganda, Malawi, Ethiopia are Kenya’s biggest supplier,” Mutua says.

Lack of adequate funding by the national and county governments has increased the financial burden on farmers. In 2020-21, the government has allocated Sh60.7 billion to agriculture against a Sh2.7 trillion budget.

In neighbouring Tanzania, the government has offered relief to farmers by exempting VAT on agricultural crop insurance, recovery of input VAT for exporters of raw products and scrapped the 25 percent duty on packaging materials for agricultural seed to promote value addition. Tanzania’s introduction of crop insurance aims to shield farmers from natural disasters and climate change.

Kenya is a signatory of the 2014 Malabo Declaration of Accelerated Agricultural Growth and Transformation for Shared Prosperity and Improved Livelihood, where African Union member states committed to allocate at least 10 percent of public expenditure to agriculture. But the government’s spending on agriculture remains low.

Mutua proposes increased budget allocations for agriculture by national and county governments. Government subsidies on farmers will help lower the cost of production and ensure constant availability and better market prices, she says.

She adds that with agriculture being a devolved function, every county should set up common food processing zones with storage and preservation facilities that meet the recommended safety standards, where traders will access products directly from the farmers.