Court orders disregarded by the state

Swearing-in of 41 judges, Miguna's return, to name but a few. 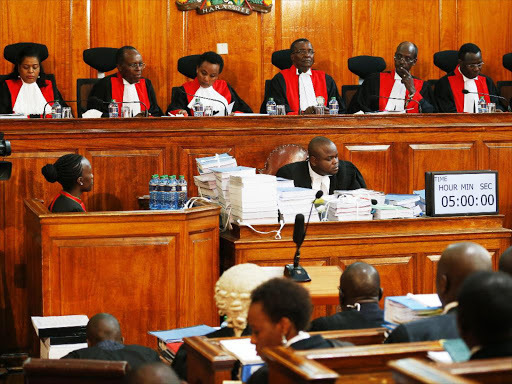 Here are a few orders the executive has disobeyed in the recent past.

One of the cases that attracted wide publicity is the matter involving the swearing-in of 41 judges recommended by the Judicial Service Commission.

The CJ is on record accusing President Uhuru Kenyatta of refusing to swear in the judges despite two court orders.

Maraga says the refusal has created a serious shortage of judges, so much so that the hearing of some cases may have to be pushed to 2022 due to the backlog.

On February 6, a three-judge bench ruled that the delay by President Kenyatta to appoint the 41 judges was unconstitutional.

Judges Lydia Achode, Chacha Mwita and James Makau said Uhuru was constitutionally bound by the recommendations of the JSC on persons to be appointed.

The court determined that the appointment of judges by the President should be immediate after recommendations are forwarded to him by the JSC.

The court further held that the reasonable time contemplated by the Constitution is 14 days from the date recommendations are forwarded.

But since the High Court decision, the President has made no move.

A second case has been filed in relation to same issue.

Government officials have disregarded the courts' directive to allow his return to the country. The lawyer is in Canada.

In one of his decisions, Justice John Mativo noted that several orders directing the government to facilitate Miguna’s return have been disobeyed.

Kariuki was the commander of the Kenya Air Force during the August 1, 1982, attempted coup. Immediately after the mutiny had been quelled, he was arrested and confined for some time at Kamiti Maximum Security Prison. On January 10, 1983, he appeared before a court martial and was charged with failing to prevent a mutiny and failing to suppress it.

But the government insists that it has not disobeyed the court, explaining that Miguna’s passport expired and he has not applied to renew it.

According to the government, Miguna’s passport expired on March 22, 2019.

In December 2018, Justice Chacha Mwita directed the government to return Miguna’s passport but it later emerged that it had been perforated. The judge also awarded the lawyer Sh7.2 million as compensation for violation of his rights and for the destruction of his Runda home when police officers raided it.

Miguna was deported in February 2018 after he took part in the mock swearing-in of ODM’s Raila Odinga as the people's president, an offence for which he was arrested initially then bundled out of the country.

In another instance is the refusal to restore former Air Force Commander Peter Kariuki to his rank.

The order was given more than six years ago.

Also sought by Kariuki is Sh71 million compensation, which the Court of Appeal ordered the government to pay him in 2014.

He had told a bench of three judges that he was subjected to glaring violations when he was court-martialled in 1983.

Kariuki was the commander of the Kenya Air Force during the August 1, 1982, attempted coup.

Immediately after the mutiny had been quelled, he was arrested and confined for some time at Kamiti Maximum Security Prison.

On January 10, 1983, he appeared before a court martial and was charged with failing to prevent a mutiny and failing to suppress it.

He was convicted of the two offences and sentenced to four years in prison. He was also dismissed from the force and stripped of his rank, benefits, medals and decorations.

Kariuki served his full sentence after the Commissioner of Prisons declared that he would not be considered for any remission of his sentence.

Barasa sued for compensation over an injury he suffered while on duty. He fell into a ditch and injured himself while on duty 10 years ago.

Despite court orders directing the NYS director general to pay him Sh3.6 million, Barasa is yet to receive a shilling.

His employer has dismissed his claims, saying he was transferred to KNH where a total hip replacement was successfully carried out and the NYS paid his bills.

His is just one of many pending compensation orders yet to be honoured by the state.

Awarded Sh1.8 million in 2016 for police shooting but never paid, state says she was negligent.
News
1 year ago

Compensation to be paid to Kenneth Matiba for unlawful detention has risen to Sh1.8 billion according to new documents file in court.Matiba's lawyer ...
News
4 years ago

They want government officials cited for contempt of court for failure to respond to suit
News
2 years ago
by JILLO KADIDA News Editor
Columnists
29 August 2020 - 04:00